October 22, 2022
I read and reviewed the original MARVEL 1602 by Neil Gaiman a while ago, but my biggest criticism of the book was that there are a couple of key Marvel characters that don't get their powers until the final pages and the ending was far too open ended to be satisfying. Since I'd subscribed to Marvel Unlimited for a month, I wanted to take the chance to see if reading the sequel/spinoff 1602 series would give me the closure and sense of satisfaction I wanted to get out of the original. In the interested of not burring the lead, I did not get the feeling of completeness that I was hoping for, but here are some quick thoughts I had on each of the series: 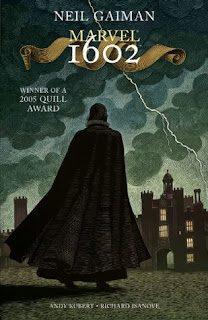 A uniquely beautiful artstyle and classic marvel characters reimagined for an Elizabethan era are the main draws of Gaiman's first (and I think only) foray into the world of Marvel. While Gaiman really puts his knowledge and love for the Marvel universe on full display and sets up an intriguing scenario with all these time-displaced heroes and villains, things just don't come together as well as they should have in the big finale.
Full review here
From this point forward, I don't actually know if there is a clear timeline for a lot of these sequel series. I read them in the order of their publication and I would recommend doing the same. 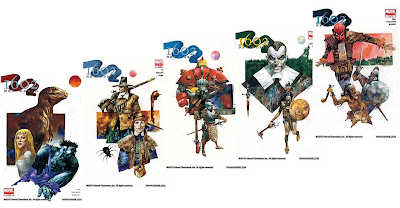 I gave this a disappointing 2/5
The first follow up to the 1602 storyline is also by far the weakest in the entire comic line. Cheap-looking and inconsistent art along with a plot that doesn't really have a strong through line or conclusion are NEW WORLD's biggest issues. Unfortunately, these are not problems that are easy to overlook, but I also wouldn't recommend skipping it since I did enjoy Peter and David getting their deserved 1602 debuts as Spider-Man (The Spider) and Hulk that Gaiman should have worked into the original plot. This will also be very helpful for those who want to read through MAREL 1602: SPIDER-MAN.
Full review here 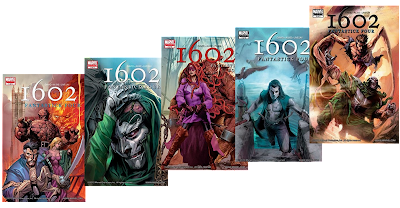 This was a 4/5 for me
While I have never been a huge fan of Marvel's OG family/team of super-powered heroes, I did think that this was an interesting read which did a nice job of expanding the 1602 universe with more reimagined versions of classic Marvel characters, including some I wasn't really familiar with. The art is much better this time around although some of the panels looked rushed and it didn't come anywhere close to being as distinct as the original series. I don't know why it gave one of the side characters such an awful ending and I suppose this adventure is mostly skippable if you really don't care for it, but I think this nautical journey filled with mythological twists is worth going on.
Full review 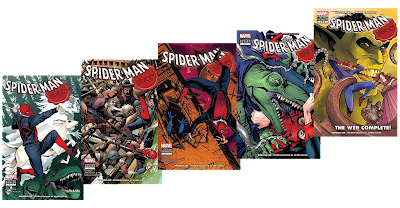 This series came up just shy of perfection for me at 4.5/5
I could be a bit biased since I have always loved Spider-Man, but this was by far the strongest 1602 series for me. The artwork may not impress everyone, but I enjoyed it a great deal and absolutely loved the character designs of the new characters as well as the different outfits Peter gets that are reminiscent of his classic costume, but still felt true to the time period. There is an early twist that I think will make a lot of people upset (I know I wasn't the biggest fan of it), but that event does serve as a catalyst for sending Peter on an adventure across Europe, which made this feel the most like Gaiman's original story in terms of the scope and scale of the adventure. I found myself a little surprised at how disturbing this one could sometimes get, especially visually and a couple of the side characters get a somewhat depressing ending (again), but for most readers, I would actually recommend considering this series to be the conclusion of the 1602 comic line since it is the last one that is completely separate from the remainder of the Marvel comics universe.
Full review 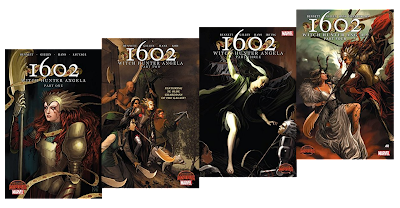 In spite of how confusing this was to read, I still gave it a 4/5
This one is probably the hardest to recommend because it appears to have more to do with the SECRET WARS comic event (which I have not read) than it does with the rest of the 1602 universe, despite being set in the 1602 continuity. The opening to this adventure was a bit overwhelming for me since it seemed as though the world had changed a great deal, though I did not understand how or why. I also wasn't familiar with the duo that served as main characters to the story and am not even sure if they were pulled from the main Marvel lineup or created as original characters for this adventure. I did still have fun with this and enjoyed even more characters getting the 1602 treatment, but I had to get past the fact that I didn't really know what was going on.
Full review

This might be the question you are asking if you've made it this far. Unfortunately, the answer isn't terribly straightforward. If you are like me and enjoy comics as an art form, but find the Marvel and DC catalogues to be intimidating or even unapproachable, then the prospect of a comic line that is somewhat separate from everything else can be very appealing. The fact that the 1602 line doesn't remain totally self-contained may be a deal breaker for some, but the option to stop at SPIDER-MAN is still there. The bigger issue for many will probably be that there is never really a sense of closure or completion when finishing really any of these volumes. One one hand, it makes sense that Marvel would want to keep the door open for this universe to continue onward, but I think that could have still been achieved without ending every series (including the original) on a weird and unsatisfying note. There is something worthwhile here for those who want to see classic Marvel characters reimagined for a different time period and want to see how that all plays out. It may just be important to go into this comic line with the right expectations. I am personally very happy to own the tenth anniversary hardcover of MARVEL1602 which comes with a lot of really interesting "behind the scenes" content at the end and I am glad I checked out the follow up series while I was subscribed to Marvel Unlimited. I can't recommend the 1602 line wholeheartedly, but I did have a good time with it and others may as well.
(+) Unique concept
(+) Some neat designs for the reimagined characters
(+) The Anniversary Hardcover for the original 1602 series by Neil Gaiman has some awesome bonus content (in some ways, that's what drives a lot of it's value for me)
(-) Art/Visuals are a hit or a miss across the comic line
(-) The story does not remain separate from the rest of Marvel's continuity (though stopping at MARVEL 1602: SPIDER-MAN can solve this somewhat)
(-) Insistence on ending every volume on some sort of cliffhanger that is never followed up on
BOOK TALKS REVIEWS