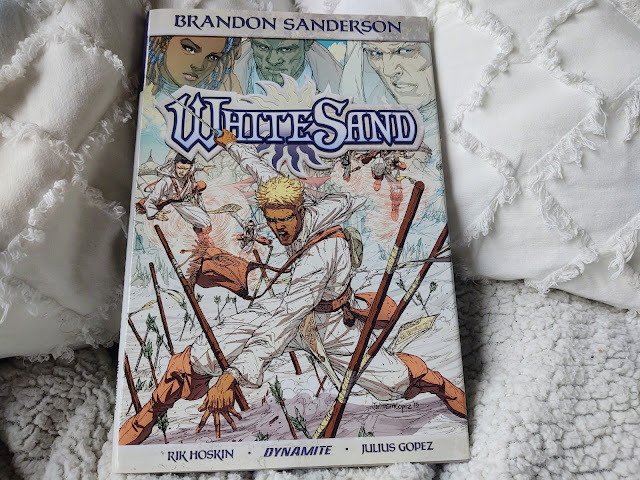 Set within Brandon Sanderson's famous Cosmere, WHITE SAND is a graphic adaptation of one of Sanderson's earlier novels that was never published. The art style and concept has intrigued me for a while now, so I decided to give this series a try.
HOW I RATED IT
4/5 Highly detailed art, a fascinating magic system that lends itself well to the graphic novel format, some interesting characters, and a sprawling world all contribute to making this a worthwhile read although some aspects of the plot and characterization held it back slightly for me. 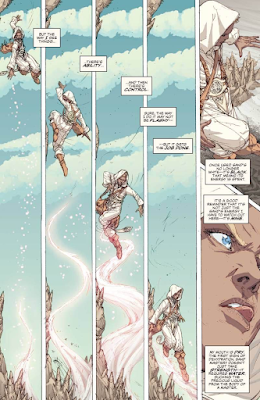 CHARACTERS
While I definitely enjoyed all the characters, fans of Sanderson may find that you don't get to know them as deeply as some of the characters from his novels. I think this is in part due to this being a graphic novel, but I will say that I appreciated moments where we actually do get some of Kenton's internal dialogue as I think that added a lot to my understanding of him and also served to make him more likeable during situations where he's a bit petulant. I also felt like the art did a pretty good job of conveying emotions of all the different characters, but obviously a visual medium will never be quite as detailed as the written word when it comes to character thoughts and motivations. What mostly held the cast back for me was that there are so many characters and while they are all visually striking, only Kenton (the main character) Khrissila, Drile, and a lady who serves as a grand judge of sorts really stood out to me. There are a couple of others that intrigued me and seem like they may play a bigger part in future volumes, but there is so much going on and so many faces thrown at readers, that I found it difficult to really get attached to too many of them--even some that get a decent amount of page time like the various members of Khrissilla's retinue.
SETTING/WORLD
The fantastical world of Taldain is a majestic setting for this sprawling adventure though we only get to explore the part of it known as "Dayside" which seems to be a continent made up primarily of the titular white sand. I appreciated that we got to see different regions within Dayside and found the map of this continent to be helpful in terms of trying to understand where all the different characters were at different points in time. Generally, I'm not a gigantic fan of desert planets like Tatooine (STAR WARS) or Arakis (DUNE), but the landscapes here were absolutely incredible and truly otherworldly in the best possible way. One thing that I most look forward to in the upcoming volumes is exploring other zones and perhaps even Darkside, if the story takes us there.
PLOT/TONE
The story of WHITE SAND is definitely an interesting one. At it's core, it is about a group of mages that can control sand similar to the Sand Benders in AVATAR THE LAST AIRBENDER. What was interesting about this group is that you gradually learn that they seem to be the only type of magic users in the whole world since the other guilds all practice much more traditional crafts (architecture, art, etc.). I also enjoyed that our main character isn't especially good at Sand Mastery and has had to come up with clever ways to make up for his lack of natural ability (since this craft is a combination of skill and an inherent affinity towards controlling sand). There's also some interesting commentary on how a lot of people think Kenton's lack of ability stems from him being of a mixed race/ethnicity, though the only member of his family that we actually meet is his father who is a respected, high ranking member of their order, though he's truly horrible father. 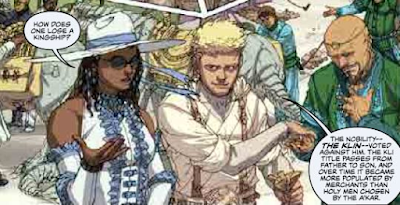 Things happen very quickly in this story and there is a pretty shocking event in the second chapter that I don't want to spoil, but this event essentially acts as a catalyst for the rest of the story, so I'm keeping details about the adventure vague. For me, I think this big event came a little too abruptly and I didn't feel attached to any character other than Kenton at this point so it made the stakes feel lower than maybe they should have. Still, the ensuing journeys of all the different characters were well done and tonally, I liked that this is Sanderson's typical serious, but not too messed up, type of story. I wished that the events of chapter 2 hit Kenton a little harder than they did though since they should have been pretty traumatic, but he seemed to bounce back quickly.
THE ART AND HARDCOVER QUALITY 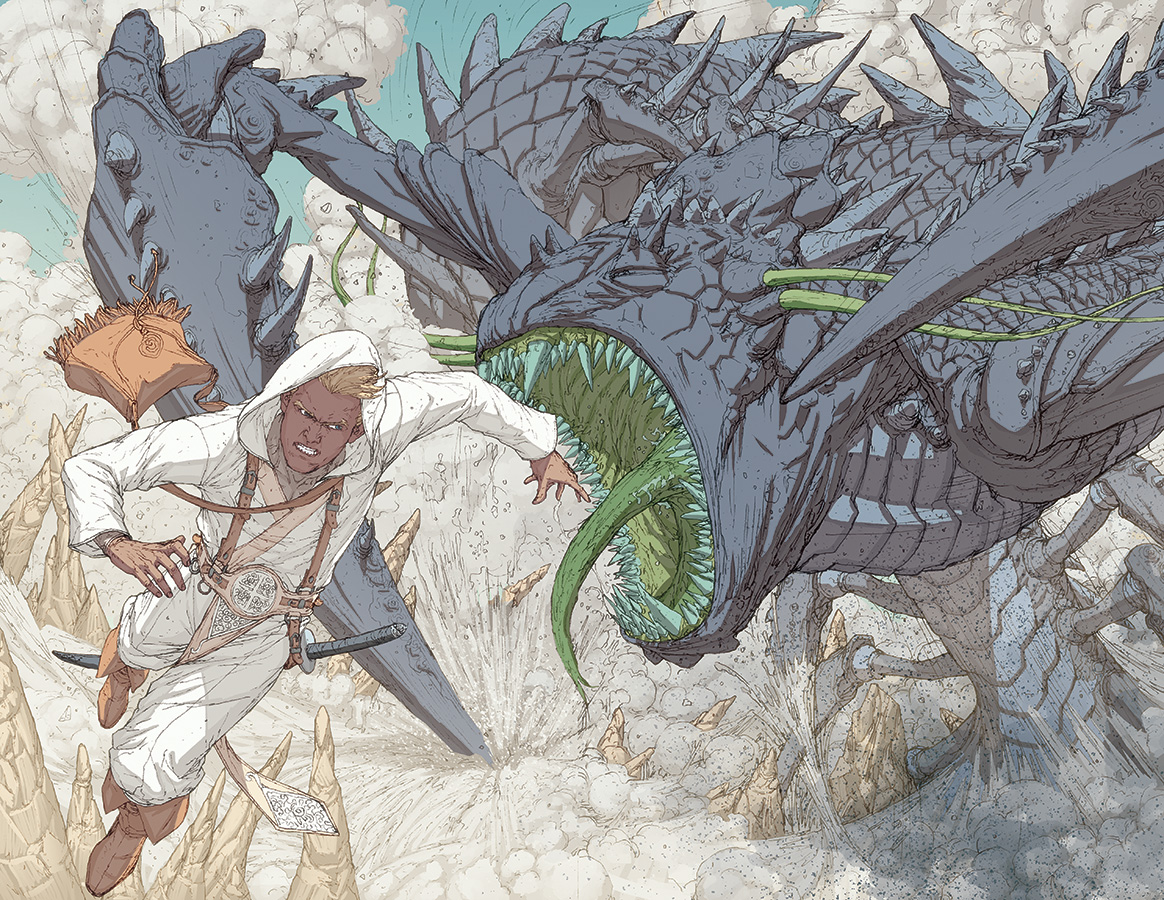 One of the things that drew me to this series (other than Sanderson's name) is the stunning artwork. Everything is intricately detailed and the linework has a sort of grit to it that fits really nicely with the setting. The action scenes are all rendered very nicely, the character designs are amazing, and there are some breathtaking full page shots that really deserve to be framed as prints. One other thing that was so nice to see is that the quality in each panel doesn't fluctuate wildly as it does in some comic series, with some shots looking amazing, and others looking cheap/rushed. It was so refreshing to see something where a lot of time and care was put into the art, so I hope more series take note that comics should be beautiful and not just something to be pumped out quickly. Seeing a Sanderson world in a graphic form is really cool, and I very much look forward to continuing the story with this lovingly done art.
The hardcover edition is nice to have on a shelf and there are some little things about the cover that I very much appreciate. One is that the volume is numbered (which graphic novels are generally pretty good about, but not all books are). Another huge plus for me is that the cover art is basically the SAME as what is on the interior. A pet peeve of mine is comics where the cover art is stunning and the interior looks absolutely nothing like that. Lastly, I liked that the book looks good without it's dust jacket. Personally I didn't like to read it with the jacket on so, having a unique design on the actual cover was a nice touch. 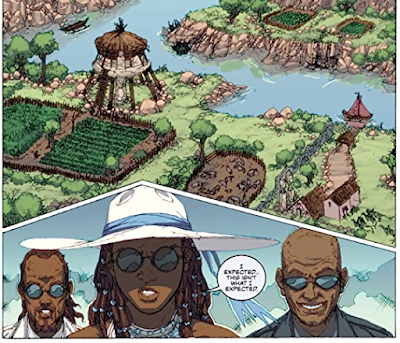 CONCLUSION
Even with the things that bugged me about this first entry into the WHITE SAND trilogy of graphic novels, I still enjoyed it very much because of the rich Dayside landscape, the vibrant cast of characters, and an interesting plot that does seem like it will be much more interconnected in the next volume now that the major players are coming together and Kenton is up against a very clear point of conflict alongside the mystery that was established in Chapter 2, but never fully solved. I think I will probably continue on to the next issue right away since I really want to know what happens next.
REVIEWS