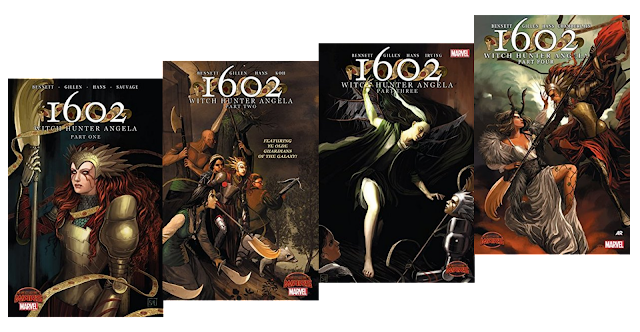 After reading MARVEL X FORTNITE: ZERO WAR on the Marvel Unlimited app, I wanted to use my subscription to read some other things from the catalog. Since I'd found the ending to the original MARVEL 1602 so disappointing, I figured I should see how the rest of this comic line played out.
RATING
4/5 Mostly pretty artwork and a unique, fantasy story are really the main things this series has going for it as I wasn't familiar with the two main characters and found it to be somewhat disconnected from the rest of the 1602 comic line.
Please Note: While I will not be getting into spoilers for WITCH HUNTER ANGELA, I will have to mention a couple of details about the original MARVEL 1602 series as well as the ending to NEW WORLD that would be considered spoilers.
CHARACTERS/STORY
Angela and Sarah are the two main heroes of this story set in the 1602 universe. I may just be dumb, but I honestly had no idea who either of these characters were or if I should have any particular attachment to them. There is a bit of a romance between these two women, although they tend to be referred to as "friends." I thought this was interesting in that the characters aren't super outward about it which made sense for the time period it was set in, but I was also confused about how this aspect of their characters did or didn't jive with their faith. I mention faith in particular, because I was extremely confused by what was going on in this department. Angela is a holy hunter of people who have made a pact with a deadly temptress and are now known as "Faustians," but Angela does not seem to be an agent of the Catholic Church as previous characters in the 1602 universe have been up until now. Instead, it seems like Doom has somehow taken on a god-like state and it is unclear if he is actually alive at this point or not. It also confused me that Faustians seem to be the new target instead of Witchbreed and I think a lot of my disorientation stemmed from the fact that this series appears to be tied much more closely with the SECRET WARS comic line than it is with the rest of the MARVEL 1602 continuity. I found this to be somewhat unfortunate since one of the main draws for me with the 1602 universe is that I didn't need to understand the rest of the Marvel series to appreciate it. While I suppose it is neat that the 1602 characters presumably got temporarily merged in with the mainline Marvel comics, I also found myself wishing that I had treated MARVEL 1602: SPIDER-MAN as the end to the 1602 story since I had absolutely no idea what was really going on in WITCH HUNTER AGNELA although Angela and Sarahs adventures did entertain me. One other little gripe is that I found myself confused by a very early twist involving King James. In some ways, this maybe explained why he didn't get killed by Hulk, but in others, it opened up so many more questions.
THE ART
The majority of this series has some of the most beautiful artwork in all of 1602. A lot of it's shots look both modern but also very fitting to a classical fantasy setting. The story is much more focused on dark magic and the fae, so I loved that the visuals reflected that theme. I also enjoyed seeing even more Marvel characters get the 1602 treatment, including the Guardians of the Galaxy! Randomly, the artwork does look very dull and not especially pleasing (especially in the last few pages of the final issue), but I think this was actually an intentional artistic choice to indicate that the magical element had diminished. If so, then that's an interesting concept, but a rather odd choice all the same since a simple change in lighting or color pallet would have been a better way to visually communicate that idea rather than a full downgrade in the art fidelity.
CONCLUSION
While I was able to enjoy this for the compelling story it told and intriguing characters I wasn't previously familiar with, I do not think this made for a good way to close out my 1602 reading experience as it didn't seem to be as connected to the events of previous series in this comic line as I expected it to be. Perhaps I will eventually look into the SECRET WARS comics to see if they help me fill in some of the blanks, but I would say that those who mean to stay within the confines of the 1602 universe should probably just stop at SPIDER-MAN.
(+) Mostly stunning artwork
(+) More 1602 versions of classic Marvel heroes and villians
(+) An intriguing story filled with more magical elements
(+) Leads that I came to like even though I was not familiar with them
(-) Some odd artistic choices
(-) Very confusing to get into if you've only been following the 1602 line and did not partake in the SECRET WARS event (I am assuming that reading those comics would have cleared things up, but I don't actually know).
REVIEWS