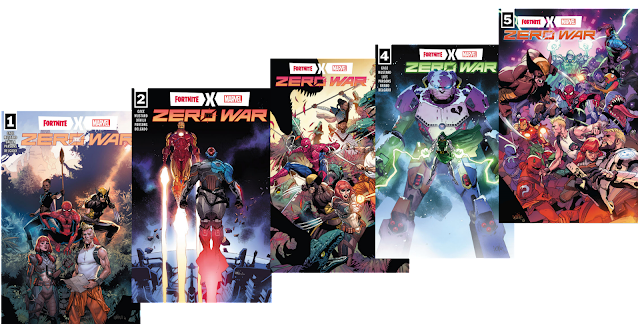 I read MARVEL X FORTNITE: ZERO WAR on the Marvel Unlimited app since I am an avid Fortnite player (which is not to say that I am good at the game...I'm terrible in fact) and I generally enjoy the living story of the game.
HOW I RATED IT
3/5 While there are some interesting tidbits of Fortnite lore, odd character choices, slow pacing, and confusing artistic inconsistencies with the Fortnite game held this limited-run series back from being as good as it could have. 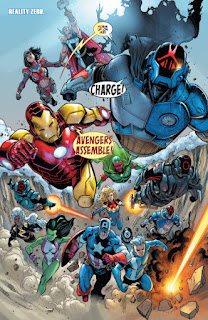 CHARACTERS
One thing this comic does better than the BATMAN/FORTNITE crossover comic is balancing in the characters from the Marvel Universe with Fortnite original characters, especially members of The Seven. I also appreciated that there were some callbacks to some of the different characters that have appeared in different Fortnite collaborations, though it would have been nice if Deadpool had a noteworthy role since he was (sort of) the one that really kicked off the trend of having so many official Marvel characters in Fortnite's Battle Passes and Item Shop. It was a lot of fun to see characters like Iron Man and Foundation interact with each other. It was also quite nice to see the Fortnite characters get more interpersonal moments with each other like with seeing the sisterly dynamic between The Imagined and The Order as well as the The Paradigm reconciling her differences with other members of The Seven.
Some things I didn't like were the needless shipping of Marvel characters with members of the Fortnite cast. I won't spoil who gets with who (or in one case just has sort of a missed opportunity situation), but I just thought this was unnecessary and I found it really awkward. Because I know a lot of younger kids will be reading these, I also found it deeply uncomfortable that it is heavily implied that two characters slept with each other (or at least got a little frisky). In addition to the unsolicited romance subplots, there are also some bizarrely tragic backstories given to Jones and The Imagined that I just wasn't expecting and felt rather out of place with the general zaniness of the story and how their characters have been portrayed before. Jones in particular felt very different from how he's been characterized in the past and he is even drawn in a weirdly gritty way that doesn't at all reflect how he normally looks. The biggest issue I had though is that Spider-Man's character gets absolutely assassinated by Gage's awful depiction of him as an annoying, bumbling idiot rather than a quirky, earnest, and capable hero. I had no idea it was even possible that a character as awesome as Spider-Man could be so badly botched but Gage managed it. So, please Marvel, for the love of everything holy, never let Gage EVER get anywhere near Spider-Man again! 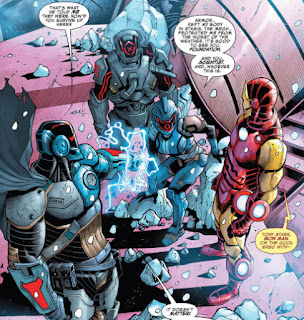 SETTING/WORLD
It was cool to me that the story actually takes place in both the Fortnite and Marvel universes. The variety of different environments definitely made this feel a lot more like a true adventure than the DC Comic series and it's subsequent one-shot. The specific Marvel locations and Fortnite points of interest that the story visits might be considered spoilers, so I will just say that there are a handful that will likely surprise and delight both Fortnite and Marvel fans.
PLOT/TONE
Ultimately, the story boils down to two glorified fetch quests. One group of characters is in search of a stray shard from The Zero Point that somehow found it's way to Reality 616 (A.K.A. the prime Marvel universe) while the other is in search of the Paradigm's mech that has crashed on the Forntite Island's Moon. There isn't really much going on for the majority of the series aside from an explanation of how and why the Marvel characters get involved in Fortnite affairs and some low-stakes action scenes. Things do get a little spicier towards the end as more is revealed about the infamous Geno (a character who has not formally made his way into the game outside of a quick cutscene during a live event). There is also some retroactive exposition dumping that expand upon the lore of some of Fortnite's past events, seasons, and characters, but because none of that information directly contributed to the main plot, it felt like a bit of a fan-service-fueled distraction. 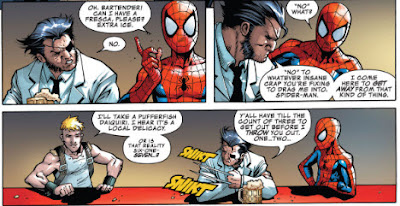 My last gripe with the storyline comes down to how I was a little confused about where in the Fortnite timeline some of the events of the comic were taking place. If the finale of the comic was meant to take place during the live event where players got to pilot Paradigm's mech (which it seemed like it was), then there were a number of inconsistencies that really bothered and confused me like how there seems to be no Seven Base on the moon, the Mech isn't the upgraded, silver version, and the ending of that event where Foundation and Agent Jones see Geno doesn't make as much sense if they had a previous interaction with him during that battle. I am certainly overanalyzing things a bit, but these seemed like important details when it comes to understanding where this comic fits in with the larger story.
THE ART
Overall, I thought the art was good. It didn't blow me away, but it was fairly standard comic fair that got the job done and was at least on par with the BATMAN/FORTNITE crossover. There is some variation in the level of detail between shots, but nothing too distracting (other than the random panels where Agent Jones looks like a completely different character).

CONCLUSION
Overall, I think this will be a worthwhile read for fans of Fortnite and it's storyline, but it will do very little for readers who are just fans of Marvel. In some ways it was more interesting than the Batman-centric ZERO POINT series and in others it fails to deliver a truly worthwhile narrative. The bizarre character matchmaking, tragic backstories that felt out of place, a meandering plot, and art that was just serviceable made for a series that I am glad I read digitally. I think if you are interested in the series, it would be best (and cheapest) to subscribe to Marvel Unlimited for a month like I did and maybe check out some other comics while you are in there unless you are a collector of anything Fortnite related and really want a physical copy.
REVIEWS