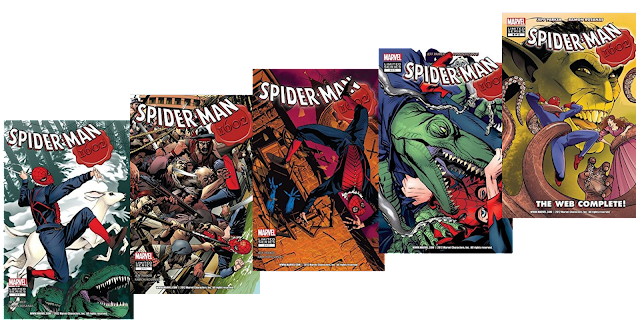 After reading MARVEL X FORTNITE: ZERO WAR on the Marvel Unlimited app, I wanted to use my subscription to read some other things from the catalog. Since I'd found the ending to the original MARVEL 1602 so disappointing, I figured I should see how the rest of this comic line played out.
RATING
4.5/5 While not perfect, I found this to be the strongest of all the MARVEL 1602 series so far due to how much it references previous series and the originality in how it reinterprets Spider-Man's supporting cast for the 1602 universe.
Please Note: While I will not be getting into spoilers for SPIDER-MAN, I will have to mention a couple of details about the original MARVEL 1602 series as well as NEW WORLD that would be considered spoilers.
CHARACTERS/STORY
One of the bigger downsides of MARVEL 1602: SPIDER-MAN is that you really need to read the somewhat lackluster NEW WORLD series in order to fully understand the setup for this new adventure. FANTASTICK FOUR is a mostly skippable series unless you are really interested in reading that before this.
In spite of being something of a direct sequel to NEW WORLD, SPIDER-MAN manages to succeed in pretty much all the ways that it's predecessor failed. I did wish that Peter and Virginia had more than a minute to be an item before a dramatic event sends Peter on a globe-trotting adventure to England, France, and Venice, but it was cool to see how both of these characters have grown into young adulthood together. I also appreciated that there was finally some connection to the 1602 X-Men characters although it is mostly reduced to references along with one of the X-Men (or Witchbreed as they are called in the 1602 universe) serving a very minor role in this story. There are some rather horrifying interpretations of Dr. Octopus, The Lizard, and The Green Goblin, but I liked how well they fit into this alternate universe and time period. There are some other fun characters that I don't want to spoil, but overall, I felt that this had by far the strongest cast of time-displaced Marvel characters (out of the sequel/spinoff series anyway), a much broader adventure, and exciting action sequences that were actually much better than what the original 1602 offered.
Even though this was the most satisfying entry into the 1602 universe, I do have to say that there is still an open-endedness about the conclusion that some may find frustrating, especially when it comes to a couple of the new Avengers characters (whom I did not mention, since I think their inclusion was a nice surprise).
THE ART
While it might not necessarily be as distinct as the oil painted style of Gaiman's original MARVEL 1602, I probably enjoyed the visuals in SPIDER-MAN the most out of all the 1602 series to so far. The art is consistent, it's detailed, and I found the character design to be superb. Spider-Man in particular sports an entire wardrobe that is both fitting for the time period, but also holds distinctly true to his overall aesthetic and color scheme. I also just liked the look of Peter's face more in this series, perhaps in part because he is older, but I've also thought that previous interpretations of his 1602 self looked a little off for some reason. After finishing this series, I kind of wished that the entire comic line had been done by this art team.
CONCLUSION
As a Spider-Man story through and through, this series is an absolute must read for fans of the character who also read MARVEL 1602, though it is too bad that they will also need to read through NEW WORLD in order to fully understand this story (you could skip it if you really want to, but the opening issue will be somewhat jarring if you do that).
(+) Some of the best visuals in the entire comic line
(+) Character designs were the best we've gotten to date
(+) Broader storyline that brings Peter to multiple countries
(+) Lots of great characters and references from previous 1602 series
(+) Some awesome new 1602 interpretations of classic Marvel characters
(-) No real sense of closure (at least for some of the side characters)
(-) NEW WORLD is sort of required reading to fully understand this series
REVIEWS