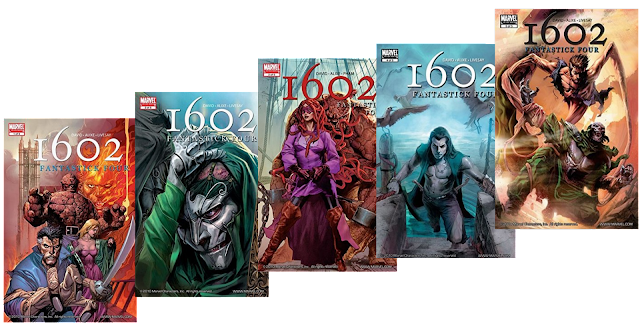 After reading MARVEL X FORTNITE: ZERO WAR on the Marvel Unlimited app, I wanted to use my subscription to read some other things from the catalog. Since I'd found the ending to the original MARVEL 1602 so disappointing, I figured I should see how the rest of this comic line played out.
RATING
4/5 I'd worried that this series would miss the mark like THE NEW WORLD and while some of my approval might be coming from how disappointing the preceding series was, I found FANTASTICK FOUR to be a much stronger use of the 1602 theme/universe.
Please Note: While I will not be getting into spoilers for FANTASTIC FOUR, I will have to mention a couple of details about the original 1602 series that would be considered spoilers.
CHARACTERS/STORY
As the title might imply, this spinoff series follows the 1602 interpretations of the Fantastic Four. That said, the cast is actually a lot more interesting than that and the scope of the story felt much more in line with Gaiman's original 1602 narrative than the NEW WORLD follow up was. Right off the bat there is a rival team introduced that seem to be under the employ of Doom. I wasn't super familiar with Wizard or Sandman and I didn't know if Medusa was the same Medusa as the Inhumans character or not, but they were fun additions all the same. There is a major marvel character that shows up later in the series that I won't spoil, but I enjoyed his inclusion a lot. The Fantastic Four themselves have never really been my favorite members of the Marvel Universe although they are one of the oldest and most iconic teams. The 1602 interpretations of them were enjoyable enough though and I found the dynamic between Reed and Sue to be an interesting one. Doom's machinations brings everyone together on a quest to reach the end of the world and I loved the nautical adventure element of this combined with the more mythological aspects. There are some surprising and rather violent twists toward the end that did throw me off a little and I didn't love one character's cliffhanger, that I assume will never be resolved. I was also a bit confused by when this story took place in relation to the events of NEW WORLD since there is a historical figure that I'd presumed would be dead by the end of that series who seems perfectly fine in this one.
THE ART
While the quality can vary greatly from panel to panel, this is overall a much stronger visual presentation from NEW WORLD, though it does not match the quality or uniqueness of the original 1602. Overall, I'd say it was perfectly serviceable, but not really noteworthy in any way.
CONCLUSION
Serving as much stronger follow up to the 1602 series, this one is for those who enjoyed this new take on the Fantastic Four and want to see more of them in this time period.
(+) Fantastic Four characters worked well enough for me even though I'm not their biggest fan.
(+) Art style remains consistent
(+) Non-Fantastic-Four characters were great
(-) Weird cliffhanger that likely won't be resolved
(-) Art fidelity can vary greatly from one panel to the next
(-) Confusing continuity with the rest of the 1602 line
REVIEWS