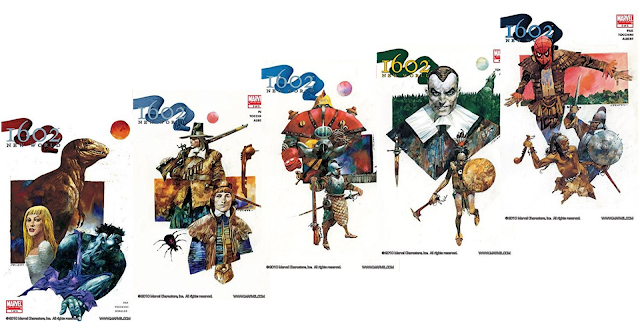 After reading MARVEL X FORTNITE: ZERO WAR on the Marvel Unlimited app, I wanted to use my subscription to read some other things from the catalog. Since I'd found the ending to the original MARVEL 1602 so disappointing, I figured I should see how the rest of this comic line played out.
RATING
2/5 Though THE NEW WORLD does resolve some of the more unsatisfying aspects of 1602's ending, it fails to deliver a follow up series that is at all worthy of the original.
Please Note: While I will not be getting into spoilers for NEW WORLD, I will have to mention a couple of details about the original 1602 series and where some of the characters end up that would be considered spoilers.
CHARACTERS/STORY
The main draw of this comic series will be for fans of MARVEL 1602 that were frustrated by how Peter and Bruce become Spider-Man and Hulk right at the very end. Following up on this frustratingly rushed pseudo-cliffhanger is really the only things that NEW WORLD has going for it narratively. I liked that the main focus was given to David and Peter and I also enjoyed the way that Peter and Virginia's friendship/romance (fromance?) developed. Placing more emphasis on Governor Dare as well as the inclusion of Norman Osborn were also good choices, but the new 1602 variant of one of the main Avengers (who I won't spoil) didn't do much for me and Dum Dum Dugan is still just kind of there. The Dinosaurs are more of a distraction than an vital component to the conflict and while the conflict between the colonists and the Indians (Native Americans) did factor into the story's climax, any social commentary that was meant to be made was drowned out by everything else going on. Vague musings on religion also didn't do anything more for me than they did in the original series, but their inclusion did at least help this feel somewhat connected with the previous adventure. My biggest issues with the story come from the fact that nothing of note really happens during the span of the 5 issues aside from Peter and David realizing the character arcs that should have been included in Gaiman's series. The exclusion of all of the 1602 X-Men and Fantastic 4 characters felt like a glaring omission with no mention provided for where they all wandered off to. The cumulative effect is a much less grand tale than 1602 fans might have been expecting. This could have been salvaged somewhat by some quality artwork, but that aspect is unfortunately mishandled as well...
THE ART
One of my biggest pet peeves with comics is when the artist changes midway through, especially since this change seems like it is almost never for the better. The art in the first two issues of NEW WORLD is definitely not as distinct as the original series, it is perfectly serviceable and didn't really bother me. From Issue #3 onward though, the style shifts dramatically to one that I did not find at all pleasing. I'm not sure what the reasoning for this change is, but it's not a great look when a five-issue run can't even keep the art consistent. While the visuals for first two issues were not as impressive as the series Gaiman penned, the final three make this series feel even more like one of those low budget Disney sequels from the 90s and early 2000s. I was also horrified that Virginia's cleavage is so prominently put on display by this second artist considering that I think she is supposed to be in her early to mid teens.
CONCLUSION
In the end, this series only holds any kind of value for those who read the original MARVEL 1602 and wanted to know what happens next for Peter and Bruce. It's not particularly worthwhile follow up to Gaiman's story in any other respect.
(+) Focus on Spider-Man and Hulk
(+) Virginia's character and powers are further explored
(-) New 1602 version of a classic avenger character felt lacking
(-) Dinosaurs have no purpose
(-) Only includes a fraction of the original 1602 cast
(-) Artist swap halfway through
(-) Cheaper-looking art styles overall
(-) Overall impression that this is a low-budget follow up rather than a meaningful sequel series
REVIEWS