UPDATE: It seems this series has been put on pause for a while (the next issue scheduled for 2017). If/when it continues, I will post an update to this roundup, but for now things will be in a bit of a holding pattern.

INTRODUCTION
A while back, I wrote up a Review Roundup post for comic issues I received from this year's Free Comic Book Day event. One of these was an actual issue which kicked off a brand new series by FIREFLY's Nathan Fillion and Alan Tudyk. For those that don't know, both men were stars in the cancelled-too-soon show, FIREFLY, directed by Joss Whedon. It seems that the pair have a comedy web series which features them as washed up actors who used to star in a show very similar to FIREFLY. I don't know much about the show, but their show-within-a-show, titled SPECTRUM, now has a comic series based off of it. Now that I've read the first two issues, I know I'd like to follow the series to it's conclusion so I've decided to create an ongoing roundup of my thoughts on each of the issues. 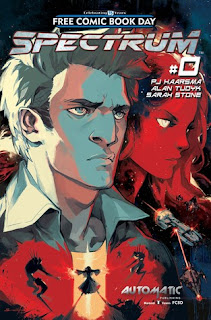 As far as opening issues go, this was definitely a good one. There's a lot that's sort of left up in the air as far as explanations go in spite of the fact that there's a large exposition dump before the comic even starts (about a page of text's worth). This is pretty much the only reason I held back from giving it a perfect score as the rest of the issue was fantastic. Readers are introduced to (former) Captain Raaker a man who immediately comes off as a man with a troubled past. He's gruff but not a total jerk and has a rather somber air about him that seems decidedly similar to Mal, his character in FIREFLY. About halfway through, a young woman named Ketheria is introduced. She's also referred to as the Scion and appears to have supernatural abilities of some kind though they are not overly defined as of yet. She's a pretty cool character, a real serene sort, but not much about her personality is revealed other than how she's determined to stop a dark force that looms in the distance.

The story tosses readers right into a futuristic Earth as it is being invaded by large insectoid robots who've sprung forth from monoliths left by an alien civilization. No one knows what they want or exactly how to stop them before they cause irreparable damage. Raaker is roped into becoming captain of a ship called The Spectrum while Ketheria is being hunted by a group of unfriendly aliens on another world. All of this action is accompanied by some really stunning artwork. It's got a charming, stylized look to it that manages to capture an insane amount of detail despite it's cartoony veneer. One of the things I love the most about it is how stunning the lighting effects are. The lettering also looks quite nice which is something I have to say I rarely even make note of.

In addition to big action and gorgeous art, this comic also has a lot of wonderful little nods and winks to beloved works of science fiction which I won't spoil for anyone here. In short, it was just a lot of fun and it's clear that the series has a lot of potential. 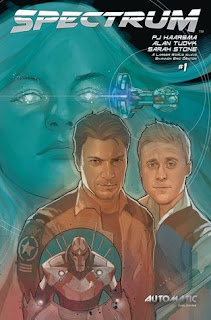 When I swung into a local comic shop, I was thrilled to find that they did in fact have this issue in stock. While I did rate this one a little lower than the opening issue, I certainly do not regret picking it up. Mostly, the reason for this dip in how I felt about it was due to the fact that there is so much going on in this issue and all of it feels a little bit rushed. A new character, Cash is introduced. While Raaker has Nathan Fillion's likeness, Cash is the cartoony stand-in for Alan Tudyk. I did like the character's over-optimism and quirky charm, but I wished the overall tone was a little less on the campy side. The way he meets up with Raaker (who has just met another newly introduced character) felt quite forced even by scifi/comic standards. I'm the type of person that can definitely suspend a good amount of disbelief in favor of a good story, but even I couldn't overlook just how conveniently coincidental things played out.

Then there's Ketheria's quest to do...something. We still don't know exactly what she's up to other than she's got a potentially mesmerized ally and she needs a ship. So she and her follower find another new character who I think I'll find quite likable, but since we don't get much of him, it's hard to say for sure. Then there's a page or two at the end which features two more never-before-seen characters and leaves off at a dramatic twist. Since I had really no idea who either of these people were, the twist didn't have as much impact as I would have liked, in fact it felt rather flat and unearned.

The art is still fantastic and I do still find the story to be compelling. I also think things will be better in the next issue. It just kind of seemed like the writers were trying to get all of the pieces on the board as quickly as they could and for that I think the issue suffered overall. I'm looking forward to Issue #2 and hope to get to know some of these newcomers a little better.

CONCLUSIONS (So far)
So far, I've really enjoyed SPECTRUM. It's charmingly familiar while also refreshingly different and free of the intimidation factor which comes with trying to start in on most comic series. Things are off to a promising, albeit slightly rocky start and it feels like the best is still to come. From what I understand, this is going to be a rather limited run so some of the rough edges can probably be attributed to scrambling to get everything in place for the story's key moments. I greatly look forward to the series' next installment.
UPDATE: Unfortunately this series was cancelled after just two issues. The series was weird and a little messy, but between the intriguing story and beautiful art, I felt like there was a lot of potential here. These two issues might be worth picking up, if only to flip through the gorgeous visuals, but story-wise things sadly ended before they ever really began.
REVIEWS