Happy Free Comic Book Day (FCBD) 2016 to all! For those who don't know, Free Comic Book Day happens on the first Saturday of May each year, that being today (the date of this post). I've taken advantage of some of the days digital offerings on Amazon and Comixology before, but in general, those are digital booklets of comics from past FCBDs, issues that are always free, or just comics that happen to be free on that day (Comixology always has a rotating selection of freebies for download). But this year, I joined a couple of friends and actually attended the event in person at a local comic shop.

It was pretty cool to see so many people out for this specific event and the comic shop I went to did a nice job of funneling people in and out so that they could check out the other things happening on the street (the city made a nice little event out of the day). I snagged my two free comics (groups were allowed up to four) and purchased a graphic novel while I was there - gotta support the shop after all! 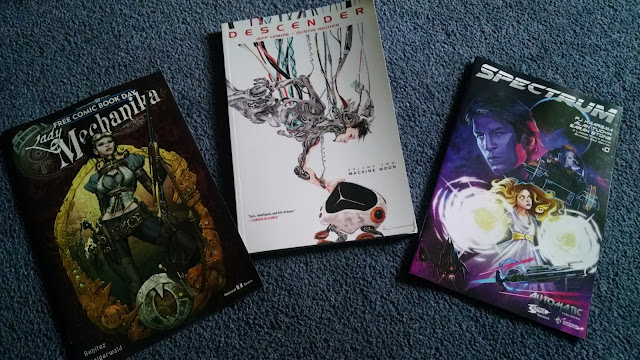 DESCENDER VOLUME 2: MACHINE MOON
I've been anxious for this one to come out and since I was already at a  comic shop, I decided to pick up this new release. It's good for the shop and better for me! I won't be reviewing this one here, but am very excited to read and review it very soon! Anyone who read my review of DESCENDER VOLUME 1: TIN STARS will know that I'm obsessed with this series.

As pictured above, I got two free comics from the event, "FCBD Lady Mechanika" and "Spectrum #0." Since coming home from the event, I have read through both and wanted to share my thoughts on them here.

1) Lady Mechanika (FCBD)
Honestly, it would have taken everything I had not to pick this one up since it has one of the most spectacular covers ever. Fortunately, the beauty persists throughout the pages of this issue that follows the hero (or maybe a rogue) known as Lady Mechanika as she hunts a creature that people
take for some kind a demon. The issue is pretty short so I won't give away too much more than that, but will say that the idea of a steampunk, cyborg hero is a very cool one and I loved how Mechanika kind of dresses like a stylish, Victorian Catwoman. The art that graces these pages is intensely detailed and really pops off the page in an exciting way. 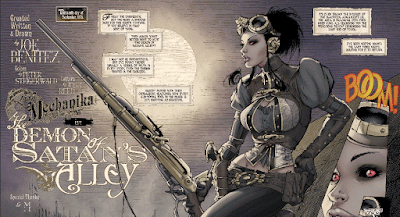 One thing to note is that this issue is sort of heavy on the advertisement side in that it's more of a sampler which serves to promote VOLUME 1 and VOLUME 2 of the LADY MECHANICA series. The first half or so IS a standalone adventure that could potentially lead into new developments in the series proper, with the second being made up of an excerpt from each of the currently available volumes. Some people might be a little turned off by this, but I was already aware of and passively interested in the series, so for me, it was a nice snapshot of some of the gorgeous visuals and fun action that it has to offer. After finishing this, I think I will be looking into reading more from Mechanika in the not too distant future.

2) Spectrum #0
What was perhaps most eye-catching about this one's cover was that I swore that I saw a cartoon version of Nathan Fillion's face on it. It turns out, I wasn't wrong. After flipping through the pages I saw both Fillion's animated face and Alan Tudyk's picture within the pages of this issue. And the art was charmingly stylized so I snagged this one up without much further thought. 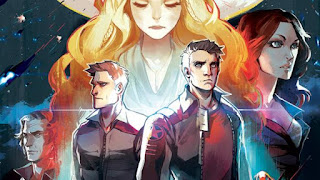 Apparently Nathan Fillion and Alan Tudyk have their own web series called CON MAN which features washed up actors that used to play on a cancelled science fiction television show. For those that don't recognize the names of these gentlemen, they were both actors who starred in the show FIREFLY, a space western that was cut criminally short and tied up with the follow up film, SERENITY. While I found it funny that the two decided to make a web show that essentially just makes fun of themselves, I also really liked the comic which is I guess based on the fake TV show that their fictional selves starred on.

Having read issue # 0 (a pilot issue) I have to say I was pretty impressed. The comic itself makes no reference to the web-based show that it comes from, but does seem to draw from some popular contemporary science fiction movies, shows, and games, FIREFLY not excluded. It's kind of a typical alien invasion plot-line, but there are some indicators that there is some larger stuff at play as well. It's not entirely clear to me just where this series will go, but I had a lot of fun going on this short joyride and would definitely not be averse to having more of it. The art style alone is something I definitely crave more of. It's a lovely mix of TREASURE PLANET (animated film) and TRANSITOR (videogame) mixed in with a westernized anime inking style similar to the way Nickelodeon's AVATAR series are done

Overall, I am very happy with both of these choices and think I may have found a couple of new series to enjoy.

FCBD DIGITAL ISSUES:
As I mentioned before, I also managed to pick up a number of different comic issues through Kindle and Comixology. None of these were on the list of 2016's offerings but there were a couple of neat ones from last year like "Doctor Who: Free Comic Book Day" featuring three of the doctors, and "Stan Lee's Chakra The Invincible Free Comic Book Day Special." I haven't looked any any of these yet, but might do another blog-exclusive review roundup for these comics in the near future.
REVIEWS