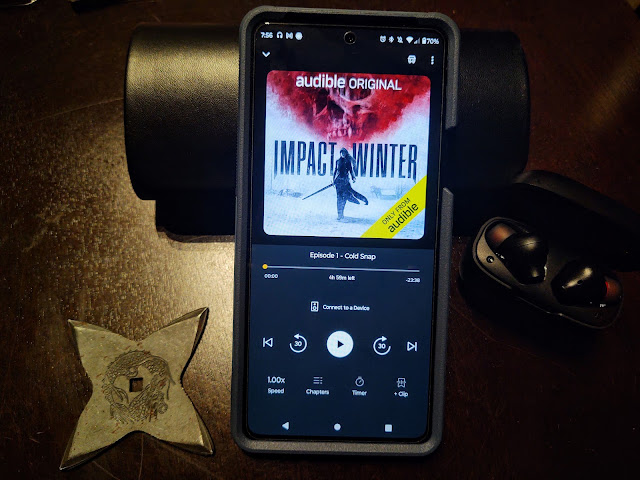 2022 was the year that I gave audiobooks another chance after having a couple of rather lackluster experiences with them in the past. As I explore the world of auditory reading, I stumbled across IMPACT WINTER as a title that Audible allowed me to download totally free from a small catalogue of freebies (which are undoubtedly meant to let people like myself experiment with the medium without the financial commitment)
HOW I RATED IT
5/5 This one is almost certainly not going to be for everyone, but I really enjoyed it for what it was and can't believe that Audible was giving it away for free (they might still be).
CONTENT
Set in a sort of post-apocalyptical version of England,  this story is told in different "episodes" which flowed quite nicely together in the way a television show might. There's a broad cast of interesting characters and a ton of supernatural conflict to enjoy alongside all the interpersonal drama. What may very well throw most people off is the way that this compelling story is told. What I mean is that this isn't really an audiobook in the same way that many are likely accustomed to. There's not really any prose or descriptions used in this story outside of narrated bits with characters writing letters to each other, making journal entries, or sending radio transmissions. The majority of the narrative is spun instead through dialogue and sound effects, making this much more akin to a radio drama (or at least what I think an audio drama is since I've only heard clips of some). I can honestly say that I've never experienced anything quite like this. Maybe it was just the newness of it all, but I actually thought this worked pretty well for me and I found myself appreciating the high production values a great deal.
AUDIOBOOK QUALITY
Love it or hate it, I feel like this is an objectively impressive piece of audio storytelling, if only from a production standpoint. Every single character has their own voice actor and this full cast even boasts several GAME OF THRONES alums. The use of sound effects (especially the really loud ones that act as a sort of jump scare) will certainly not be to everyone's tastes, but I was really impressed by how detailed they were and was actually able to form some very clear mental imagery of each of these scenes thanks to the audio queues. The action sequences are definitely the most chaotic and perhaps the part of this story that translates least effectively into this format, but they worked fine for me as well.
CONCLUSION
I think IMPACT WINTER is worth trying out. It's a very distinct listening experience, but people will likely be able to figure out after the first episode or two whether this one will work for them. I know my experience with this story has me curious to try other audio dramas in the future.
(+) Full cast of insanely talented voice actors
(+) High production value with the sound effects and background music as well
(+) An epic story that's brimming with all sorts of fun drama
(-) I feel like this is one that most will probably either love or hate
REVIEWS