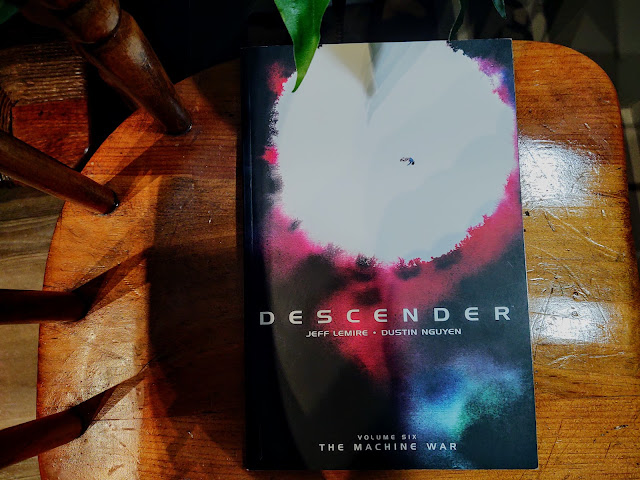 The final installment in the DESCENDER series had a lot to deliver on after the phenomenal run that it has had. I went in both excited and nervous as to how it would turn out.
HOW I RATED IT
5/5 While this ending is also a beginning in the sense that it leads directly into a new series titled ASCENDER, I still felt as though it provided a satisfying conclusion to this adventure and delivered plenty of twists and climactic moments.
CHARACTERS
Unexpectedly, the beginning of this volume introduces two brand new characters into the story, but with a slight twist: they lived 4,000 before the events that we've been following thus far. I really liked both of them and felt pretty invested in their stories even though I knew they mostly just served as a sort of extended prologue to this finale. 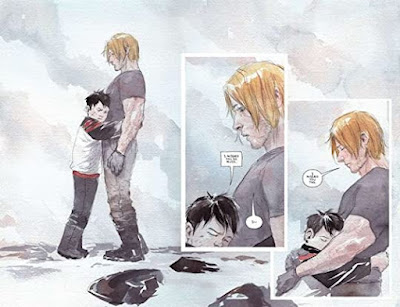 In the present, all the characters that we've met converge over the planet Mata as the fates of both mankind and machinekind rest in the balance. I particularly enjoyed the conclusions to the character arcs of Telsa, Andy, and Driller as I think this is the volume where they demonstrate that they have in fact grown over the course of this adventure. Tim-21 is still as adorable as ever and Effie continued to be intriguing. I wished that we could have gotten a little bit more of both General Nagoki and Psius, but they are still such extremely memorable characters both visually and due to their characterization. I did enjoy that we got to spend more time with Quon's former mentor and the ancient robot, though they still remained rather mysterious to me. Getting a better understanding of the Descenders themselves was perhaps the biggest treat in this volume as they filled in a lot of the gaps when it came to the origin of the harvesters and machinekind in general.
SETTING/WORLD 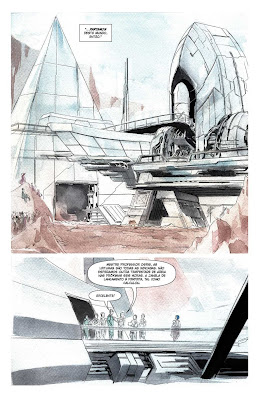 Although the majority of the action takes place in one location, the creators still somehow managed to make this feel like a sprawling adventure. This is in part due to time being an important factor in the setting, with the story being told across the distant past, immediate present, and not-so-distant future. Thanks to this mix of different timelines, there are various planets that we get to visit like the machine home world and an ancient civilization that evolves over time during the first couple of chapters. Even in the present where all of the conflict takes place above Mata, there are still lots of stunning shots of different spacecraft and their interiors as well as the underwater city beneath Mata's aquatic surface. The dark, yet vibrant and mystical universe that this series has built up continues to be one of the most compelling things about it and I am very impressed that the final events weren't confined to a claustrophobic final battlefield.
PLOT/TONE
After all the explosive moments that marked VOLUME 5's final chapter, I was quite surprised that VOLUME 6 actually takes us on a bit of a detour into the distant past of DESCENDER's universe, but this ended up being such a brilliant move that was filled with fascinating new characters and some shocking revelations about machinekind. I loved how these events tied directly into the final battle and how they cleared up so many questions about the series' lore while still sparking even more questions, particularly about where the ancient robots came from the the first place.
In the present, things have reached a boiling point and the story definitely delivers on intense space combat, interpersonal drama, and even more shocking reveals right up until it's ultimate conclusion. While I won't spoil any details about the end, I will say that not everything is wrapped up cleanly. While some might find that really frustrating, this is intentionally done to set up a follow-up adventure for a new series known as ASCENDER. Personally, I did not mind this creative choice as I think it made a lot of sense with laying the groundwork for a new type of story that will theoretically expand upon a couple of the themes/ideas that have been lightly touched upon in previous volumes. I am very interested to see where the creators take things from here, but I also found myself feeling perfectly satisfied with this being a conclusion to the conflict between machines and humans. That combined with some finished character arcs made this feel like a proper ending that just also happens to be a beginning for something new.
THE ART AND PAPERBACK QUALITY 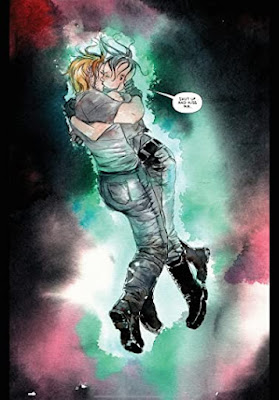 The main draw for many will likely continue to be the unique watercolor-like art style that fits the story and setting so perfectly. It is also worth stating that this is one of the FEW series I have read (especially one with this many volumes) where the artist/art style hasn't changed dramatically midway through and I think that alone deserves some praise. The paperback edition continues to be beautiful as well with cover art that actually reflects the art quality on the inside and the paneling/layout is as appealing as ever. Thankfully, there are fewer text boxes (mostly just used for planet descriptions) that are written in ultra tiny font than previous volumes had, so that helped this entry stand out even more than it's predecessors.
CONCLUSION
While not everything is necessarily wrapped up with a neat little bow, this was such an incredible ending to a series that I will almost certainly be rereading down the road. I also look forward to ripping through all four volumes of ASCENDER soon.
(+) Tim-22 is prescious
(+) Andy, Telsa, and Driller all had very satisfying ends to their arcs
(+) This artwork is so unique and beautiful
(+) Exciting action scenes and a sprawling narrative that still brings everyone together for a climactic final struggle
(-) Some people might find it frustrating that there are some loose ends left which are seemingly meant to serve as the basis for the follow up series, ASCENDER.
REVIEWS