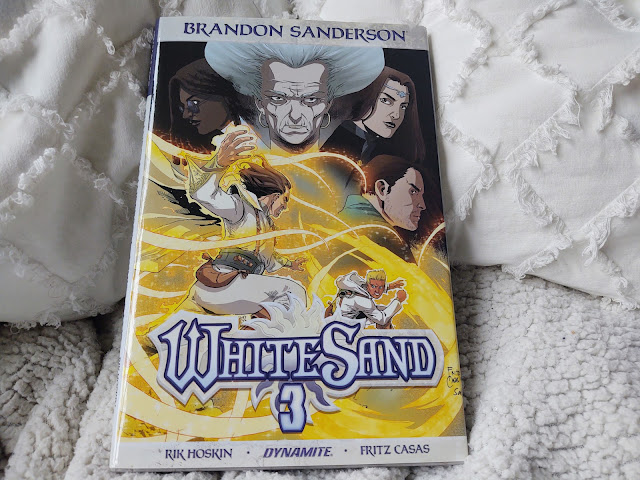 The third installment in Sanderson's WHITE SAND trilogy is one that I went into with some trepidation since I was extremely displeased with the removal of the series' original artist. Unfortunately, I found this to indeed be the lackluster conclusion that I feared it might be.
HOW I RATED IT
3/5 Less than spectacular visuals, a lack of emotional connection between the main characters, and bizarre cliffhanger ending (that I don't think will be followed up on anytime soon) make this conclusion to the graphic novel trilogy a whimper instead of a bang.
CHARACTERS
As with any good finale, all of the characters, both main and minor make a return. I do always appreciate when a story is able to give the entire cast a role to play as it draws toward it's conclusion and this is one area in which WHITE SAND did not disappoint. Individually, Kenton, Aarik, Khrissilla, and Ais are all still great and I enjoyed their arcs. That said, I was rather let down that their relationships with one another felt so empty. I didn't necessarily need a fan-servicey romance to happen at the end or anything, I just also couldn't grasp why they all still felt so distant from one another. This is probably the most true for Kenton and Aarik where Kenton really fails to show up emotionally for his friend as he goes through some very difficult experiences. The way Ais and Kenton's relationship ended up was fine enough, but I still wanted something more out of it. Drile ended up being the surprise hit, although I found it rather baffling that he looks a decade or two younger now for some reason. Khrissilla's ending made sense for her character, but it also concluded in a distinctly unsatisfying way that left me feeling like her story was left utterly unfinished. All in all, while I still enjoyed these characters, I wanted more from them. Some of this might just be coming from the less detailed and expressive character renders, but I think a lot of it had to do with the writing for me.
SETTING/WORLD
Taldain is once again a unique and interesting setting. I was hoping that maybe we'd get some glimpses of Darkside, but that did not happen. With this less detailed art style, the landscapes and fancy buildings looked a lot more generic than they did in past volumes. The alien quality to Dayside felt lost and I spent far less time admiring the background imagery than I did in previous volumes.
PLOT/TONE
The plot moves fast in some ways and slow in others. I felt like the action scenes were far less impressive this time around which is unfortunate for a finale. I also felt like there was some retreading going on with Kenton still spending most of his adventure trying to secure votes for the Diem. The politics were still interesting, but I was hoping that we wouldn't spend as much time on this aspect of the story as we did in VOLUME 2. Kenton's final confrontation with Drile did pay off in some interesting ways and I liked the twist that was revealed as a result of their duel. There are some other great character revelations when it came to Shartezan, the Beggar Lord, and Baon. A presumably unintentional twist was that the lady judge arguably is the REAL villain of this story as she seems to want to make Kenton's mission as difficult as she possibly can and is basically guilty of stacking the deck against him even though she CLAIMS she favors him. I just found her character to be absurd when I think the writer intended for her to come off as really wise and this led to some plot points that were hard to accept.
THE ART AND HARDCOVER QUALITY
The hardcover quality is just as good as the first two volumes and the dust jacket mostly matches the other two as well. This time around, I weirdly felt less positive about the interior layout. Nothing actually changed in terms of how the interior was formatted, but there is something about the way the new artist composed the panels that gave me the constant impression that I really needed to pull the book apart in order to see the inner images. Again, nothing actually changed here with the margins since there was always image bleed into the spine, so I can only assume it was the panels themselves that gave me the impression of the imagery sinking into the book's crease. I will also just restate that this artist change really hurt the story in my eyes. I did note that the new artwork seemed to be trying to match the line thickness, grit, and color pallet of the original volumes better than the final chapter of VOLUME 2 did, but it was not even remotely the same and I couldn't shake the feeling that this story deserved better. One last weird little gripe I had is that Kenton randomly looks really fair skinned in some of the shots. I don't think there was any malintent with this, but I still found it to be a distracting inconsistency.
CONCLUSION
I don't really regret picking this series up or reading it through to its conclusion. I just wish that the series would have finished on as strong a note as it started. Missed characterization opportunities, a needless cliffhanger ending, and a downgrade in visual fidelity made the third and final volume of WHITE SAND the weakest part of the trilogy for me. I'd still recommend it to people who enjoy fantasy graphic novels and/or Brandon Sanderson as long as they go in with the right expectations set.
REVIEWS