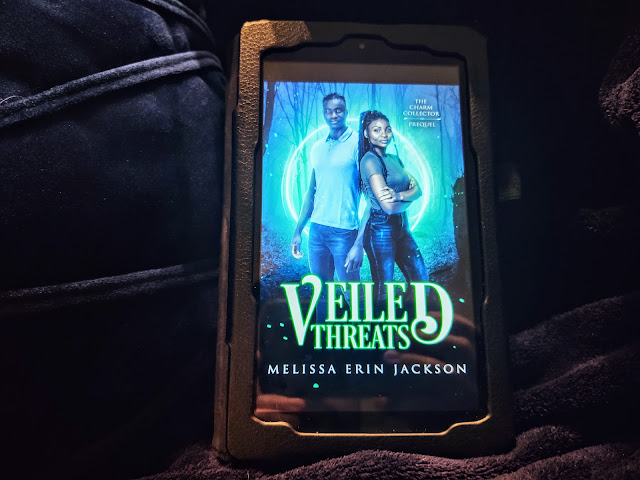 I picked up Veiled Threats recently because it was free on Kindle and I liked the premise as well as the cover (and it appears to still be free so I am not sure if I got it on a promotion or if it is just perpetually free ninety nine). Given that I have been struggling with one of my current reads, I decided to give myself a break with this novella and am so glad that I did.
HOW I RATED IT
4/5 Even though the overall writing style wasn't really to my taste, I did enjoy this quick adventure about two detectives who investigate the hidden world of the fae and all the magical goings on that other "mundanes" ignore.
CHARACTERS
Camilla Fletcher and her husband, Nelson, are the main protagonists of this novella which serves as a prequel to a trilogy of books starring their yet-to-be-born daughter. The Fletchers are a charming and genuine couple who work as private investigators on cases that no one else (not even the police) wants to touch. They are humans or "mundanes" although at one point, I thought Camilla was alluding to the two of them being from another planet, but that was never followed up on so I really wasn't sure what was up with that (maybe it was a metaphor or I just misunderstood). While I liked both of them and enjoyed that they had a healthy, sometimes silly dynamic, I did wish that I got to know a little bit more about them and that the story delved deeper into their flaws, fears, and life goals. I was also curious how they got into this line of work in the first place. One other minor gripe I had about them was that I wished there were some physical descriptors of what they looked like. While I am almost certain that they are the two people pictured on the cover, forming a mental image of characters in my head is part of the joy for me of reading a book and I just wasn't really able to do that well with these two, although some of the side characters are described quite vividly.
Since this is a mystery of sorts, there are, of course, lots of interesting characters that Camilla and Nelson encounter as they gather clues for their case. While I don't want to spoil any of them, I'd just say that they were very well done, especially considering how fast paced and brief this story is.
SETTING/WORLD
Set somewhere in California, the world Camilla and Nelson live in is very similar to our own, except that magic exists as well as magical creatures that come in different forms like gnomes, vampires, goblins, and elves. There is also a fictional city of Luma that this particular story doesn't explore, but does serve as the home of a mysterious organization known as The Collective. While the worldbuilding is fairly light here, I found it all to be enjoyable and engaging.
PLOT/TONE
Since this is a novella, things kick off quickly and progress at a rapid pace. I felt like the beginning was a bit choppy with establishing the Fletchers and their work and I would have liked to have actually seen them solve the case of the gnome who kidnapped a small child. Once the main mystery begins with a young half-fae girl going missing, things smooth out and progress in a satisfying way. All the hallmarks of classic detective-noir are here: the mysterious introduction to the case, the interviewing of different suspects, the twist, the game of cat and mouse, and the final climactic confrontation. I wouldn't call the story predictable, but I did find it comfortably familiar in a cozy sort of way. By the end, I kind of wished that there were more stories about Camilla and Nelson taking cases and perhaps moving to Luma.
THE EBOOK
While there's not normally a ton to talk about when it comes to eBooks, I would just call out that this was very nicely formatted with little flourishes and decorative section breaks. The cover art is also very nice.
CONCLUSION
While there are a couple of things I wish the novella had done a little better, I very much enjoyed it overall. I wanted get to know more about the main characters both in terms of their outward appearance and mannerisms as well as their internal struggles and hopes. I also wished we got to see them in action a little more and perhaps been provided with more details about their prior cases. I think the world and the side characters were all handled very nicely and I would definitely recommend this to anyone who likes detective stories with a magical twist.
I don't know if I will be picking up the main books in the series after this, but I am at least glad that I gave this novella a shot and would probably be interested in following Camilla and Nelson on any other quick adventures.
REVIEWS