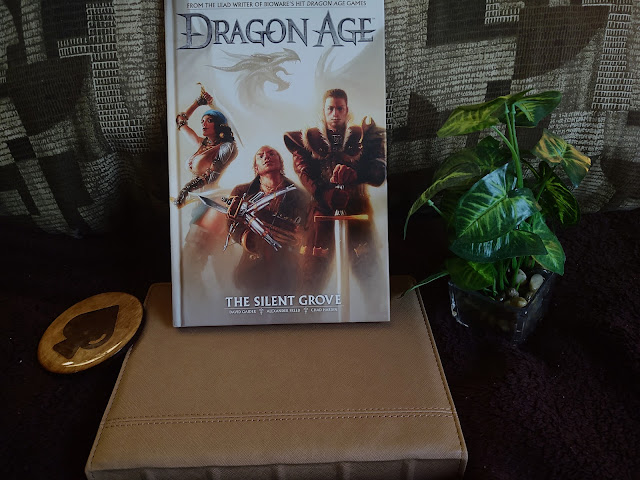 THE SILENT GROVE is a graphic novel set in the universe of the  DRAGON AGE video games that I'd picked up at a local comic shop a while ago, mostly because they didn't have what I was looking for and I like the Dragon Age franchise.
HOW I RATED IT
3/5 Everything about this was just fine. The art, the story, the characters are perfectly serviceable, but I ultimately found this to be just okay as a tie-in story to the DRAGON AGE video game universe.
CHARACTERS 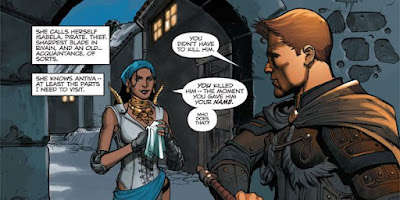 This story stars three highly recognizable characters from the games: Alistair, Varric, and Isabela which is an interesting trio to say the least even though Varric and Isabela were both party members in DRAGON AGE 2. One thing I will praise is that the writers did a good job of establishing each of them for readers who may not have played through the games which is a nice touch (even though other aspects are less accessible to newcomers). Where I think the characters falter is that there isn't really anything new presented to us as far as their backstories or characterizations go. This made the cast selection feel a bit odd since the opportunity to say or do something interesting with them was utterly squandered. I found this to be particularly true with Alistair who actually regresses in some ways. The story seems very much centered around him and his quest, but he just mopes and comes across as very self-centered with how he is seemingly abandoning his kingly duties to pursue a personal mission. I was also rather confused by a decision he made at the end of the story. Those not familiar with Isabela may be very thrown off by her physical appearance. I can't offer any kind of justification or defense other than to say that this is pretty much how she looked in the game she appears in.
One thing that may or may not bother those who play the game, is that this comic almost seems to assume certain outcomes from the games to be cannon. For those who don't know, the Dragon Age series is not entirely linear and each game can end with some drastically different outcomes. While the setup with these three characters meshed just fine with the endings I saw, I don't know if that will be the case for everyone. 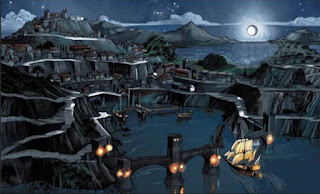 SETTING/WORLD
There are some neat places that the story takes readers to and I was impressed that it didn't simply revisit old locales from the games. I don't really want to spoil anything here, so I will just say that the two main locations visited as well as the boat that the trio travels between them on were handled very nicely and did serve to make this feel like a true expansion to the world the games take place in. 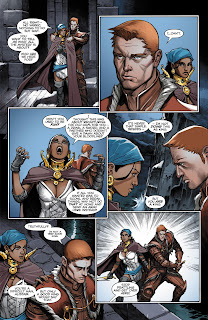 PLOT/TONE
I think for me, this is where things were the most lacking. As a fan of the games, I just did not feel as though this did anything at all interesting with the characters or the lore even though I did like how it explored previously unvisited locations. Overall, nothing really happens from the first page to the last. The general premise is that Alistair is looking for someone who has been missing for a very long time. While the characters do find clues along their adventure and some subplots develop, I just felt like this was a very lackluster plot to follow with very low stakes compared to the type of storytelling the series is known for. I also felt like Alistair's singular and somewhat reckless tunnel vision on his goal made his character feel wrong and misaligned with how he comes across in the third game (Inquisition). For me, it was also a huge misfire to introduce a character who is related to a couple of characters from the games and then just sort of seemingly close the door on their story.
All in all, although a couple of the side characters and their side plots do have conclusions, the broader search narrative is left on a "cliffhanger" which really felt more like a cheap and annoying attempt to entice people to pick up the next volume. Given that I didn't feel as fulfilled with this installment as I wanted to, I'm not sure that I'll be continuing the series.
THE ART AND PRESENTATION
Sometimes tie in comics do not always have the best artwork and while I wouldn't call the illustrations
in THE SILENT GROVE amazing, I do think they were good and the level of detail put into the characters in particular felt like it did justice to the source material. I thought the style was a little heavy on the inking/shadows which made it sort of hard to look at sometimes. I found my eyes moving from panel to panel a lot faster than I normally do, only really pausing to admire some of the more interesting shots of the characters so the art definitely did not grab me as much as some other comics. Sometimes it also felt like the compositions were a little hard to follow, mostly in the more action-oriented moments. Generally though, I felt like the visuals were perfectly fine and probably one of the better aspects of the graphic novel. 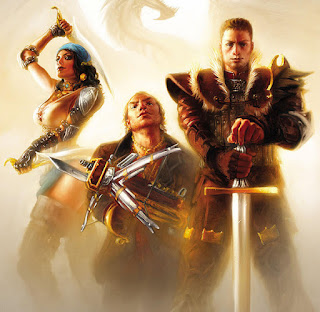 As a total package, the hardcover version of this is very nice. The book feels sturdy and I liked that there is no dust jacket and that it looked so good without one. It's always been a bit of a pet peeve of mine that comic covers tend to be done in completely different styles than the artwork within, but I think the exterior imagery at least matched the overall vibe of what you get inside.
CONCLUSION
Although I don't necessarily regret picking this up, I probably should have been more discriminating with my purchase since comic tie ins tend to not land all that well for me. The comic touts that this is a great entry point for those that haven't plated the games and I don't think I'd really agree with that given it's reliance on referencing characters and events from the games in order to convey the impact of some of the bigger reveals. I'm also not really sure why you would be at all invested in the story without having a prior connection to to these characters since it doesn't really stand well on it's own (mostly because I don't think it's compelling enough as a story unto itself). I also didn't feel like this brought anything particularly new to the table for fans of the games. While I didn't think that anything in particular was bad about THE SILENT GROVE, it also didn't do enough for me to want to continue with the rest of the series even though its possible that things get more interesting later on. I may hang onto my copy to flip through every now and then, but most likely, I will be donating it in hopes that someone picks it up and feels a bit more excited about it than I did. If you plan on giving this a try, then it may be worth your time as long as you can get a copy at a reasonable price (it looked like the digital editions were priced pretty fairly), but I'd make sure that this is something you will be able to get into before making the investment.
REVIEWS