MINI REVIEW: THE BIGGEST LIE IN THE HISTORY OF CHRISTIANITY 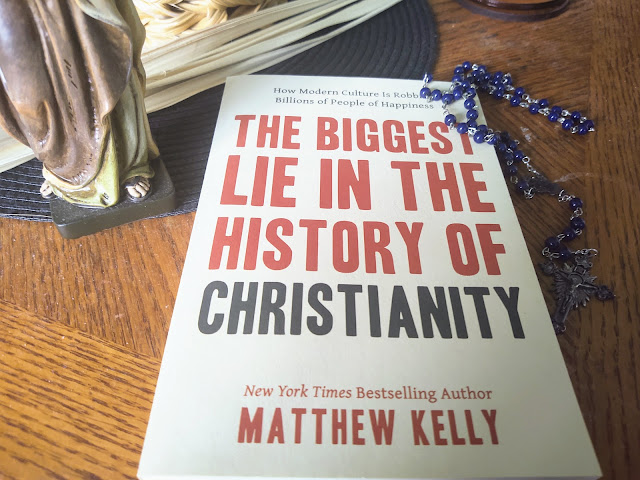 I'd received a copy of this book during the Christmas season from the church that I go to. For some reason, it's taken me a long time to actually pick it up, but I am so glad that I finally did.
HOW I RATED IT
5/5 This short, introspective book is one of the most insightful and life changing reads I have ever picked up.
CONTENT
I was about to begin my review by saying that "there's probably not very much that can be said about Matthew Kelly that hasn't been said before," but then I read some of the reviews (primarily on Goodreads) and found myself truly horrified with the number of Christians that seem to just wake up and choose absolute violence against their own. So, I would like to lay out my humble opinion on what this book is and isn't.
In spite of what the provocative title might imply, the overall themes in this book are actually quite fundamental. I am not especially well read in Kelly's writings or even religious texts in general, but I appreciate the profound simplicity in which Kelly delivers his messages. This probably isn't going to be the most revolutionary or original piece on living a Christian life that you have ever picked up, but if you approach it with the humility that Kelly employs in his writing, it might just be one of the more transformative. Sure, there isn't any groundbreaking advice that's delivered, but I often find that re-examining the basics of my faith is so crucial to my growth. I also found that reading this one chapter at a time every night before going to bed was an awesome way to end my day and reflect a little before falling asleep.
PAPERBACK QUALITY
This is a thin, floppy, well-constructed trade-sized paperback. I thought the fonts, the formatting, and the margins are all very nicely done, which sounds like pretty basic stuff, but I feel like these simple details are botched way too often in both large and small press books. I also liked the understated cover design and just the overall feel of this book while reading.
CONCLUSION
I don't really know what other readers wanted out of this quick read or why the encouragement to spread goodness in simple, ordinary ways is such an offensive concept to so many. Maybe I am just a bit dim or perhaps I have so much farther to go in my faith formation than all the prolific connoisseurs of Christian literature that have panned this as simplistic, preachy drivel, but this book spoke to me in a meaningful way and I am so glad to have read it. If you have a heart that's open to reflecting upon the little ways that you can make the time to be the person you were intended to be, then I'd give this a chance.
REVIEWS