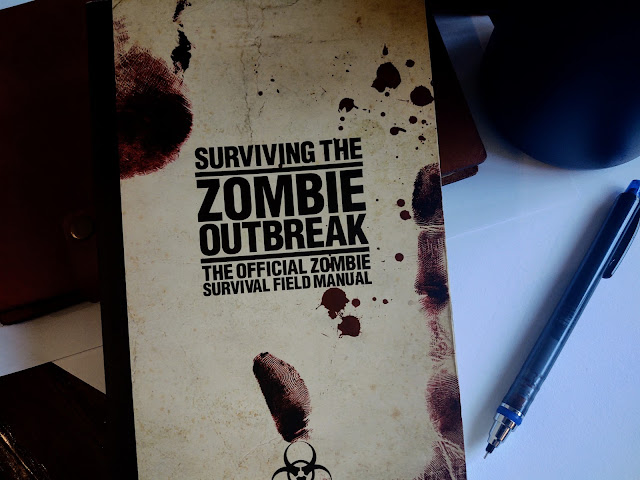 I believe I'd originally received this as a Yankee Swap gift back in college and while I had glanced at it before, I've never read it cover to cover.  While perhaps not the most tasteful book selection given the current climate, I've been trying to move through all the books I already own before I allow myself to get any new ones and this seemed like a quick hit on this list.
4/5 Although I really just picked this up so that I could skim through it and then donate it to free up shelf space, I actually ended up enjoying this a lot more than I anticipated and I think this will be staying in my collection for a while to come.
Structured as a mock survival manual, this tells the story of a zombie outbreak and provides instructions on how to survive it. What probably surprised me most is that I expected it to be much zanier when it came to the zombie humor, but that ended up being oddly dry. What I found to be most engaging were the parts that seemed the closest to an actual survival manual. There's quite a bit of content from how to obtain clean drinking water to instructions for gun safety and even details about emergency baby deliveries that I genuinely did not expect to be done with so much detail. There are also a couple of visuals provided for both the ASL and Morse Code alphabets that on their own might be useful to have on hand if you ever found yourself in a tough situation with no internet access. While I didn't fact check much of these zombie-agnostic survival tips, I did realize that this kind of thing really interested me and might lead me to looking for something a little less undead-related and apocalyptic.
I also really appreciated all the effort that was put into this when it came to adding images as well as just the general layout of the book's interior. Some people might be put off by the fact that none of the text is justified (not sure if that is common in survival guides or not) and I did feel like the inner margins could have been a little bigger as I found myself having to peel the book apart a little more than I wanted although I will say that the spine held up just fine.
Overall, I enjoyed this much more than I expected to (and maybe more than I should have). It's a fun time that may or may not be the text you should turn to in an actual crisis, but did spark an interest in survival content (unrelated to zombies) so I'll be on the lookout for some good recommendations for that. I would also say that this is a must-read for anyone thinking of writing a compelling (and realistic?) zombie story or  post-apocalypse fiction in general as it could be used as an awesome reference for thinking through how characters might survive under harsh conditions.
REVIEWS