REVIEW: LEGION: THE MANY LIVES OF STEPHEN LEEDS 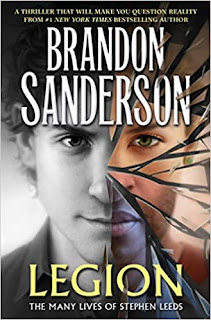 When having imaginary friends is a superpower...
Stephen Leeds lives a wild existence filled with dangers both real and imagined.
HOW I RATED IT
5/5 Fun, snappy, and semi-serialized, LEGION: THE MANY LIVES OF STEPHEN LEEDS is a must-have collection of three episodic novellas.
CHARACTERS
Stephen Leeds is the main character of all three novellas in this collection, but to say that he is a complex and dynamic character would probably be an understatement. Right from the beginning, we are told that he sees people who aren't real, at least not to anyone beside Stephen. He calls them his "aspects" and each comes with their own special function as a repository of knowledge or skills that he can draw upon during the different cases he takes on as a private investigator. These aspects all have names, backstories, and personalities distinct enough where I found myself getting just as attached to aspects like Ivy, Tobias, and J.C. as any of the "real" characters. Of the characters that aren't one of Stephen's hallucinations, his kindly butler, Wilson, was by far my favorite. There is also the mysterious Sandra who I found to be really interesting.
SETTING/WORLD
Although set in a "normal," contemporary world (something of an anomaly for a Sanderson piece), the story takes readers to Stephen's fancy mansion, ancient desert sites, shady laboratories, lavish festivals, and even a high-tech prison. Even the most mundane moments and locations always have a sort of fantastical wonder thanks to how Stephen's aspects interact within them and maintain an illusion of reality, both for their own sakes and for Stephen's. While this collection probably lacks some of the more complex worldbuilding of Sanderson's other works, I found myself captivated by LEGION's variety of locations, even if most simply served as backdrops.
PLOT/TONE
There's lots of awesome espionage-lite moments in these stories that I really loved which are enhanced by the building mystery of what's really going on with Stephen's psyche and the looming question of whether or not maintaining all these aspects will eventually consume him. I found this to be a relaxing read that managed to maintain just the right amount of action, spycraft, personal drama, and suspense without ever feeling too hectic. The story itself is told over the course of three separate novellas that sort of play out like a season of BBC's SHERLOCK where each is self-contained, but also builds up to something much larger in the final episode/novella. I really loved this format and really appreciated how the short chapters and segmented story structure made it easy to pick up and put down at my leisure.
EDITION
I feel like it is worth mentioning that I read the hardcover version of this collection, mostly because I feel like it has a cover that's far superior to the other editions. While I'm sure this would make a perfectly enjoyable eBook purchase, I'd highly recommend the hardcover if you are going to pick up a printed version. It felt nice to hold and looks great on a shelf, so I think this is one that's worth paying a little extra for.
CONCLUSION
I would recommend LEGION to just about anyone. It's light, easy reading that still felt intellectually engaging and occasionally profound.
REVIEWS