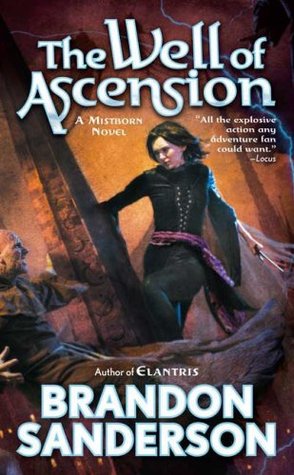 After the conclusion of the first entry in this trilogy, Vin and her friends have to figure out how to bring order to a world that they've thrown into chaos.

Note that while there will be no major spoilers for THE WELL OF ASCENSION, elements of THE FINAL EMPIRE's ending will be discussed.

4/5 Though things start off pretty slow due to a lot of information about the rules of this world and it's magic systems being rehashed, there's still an engaging tale to be told, especially after the first fourth of the book.

The world of MISTBORN is again noteworthy enough to be mentioned first. While a lot of elements that made it great carry over from the first book, what makes it feel so special all over again is how much the landscape has changed now that the Lord Ruler has been killed. It's interesting to see how the world tries to put itself back together now that the man that they called "God" is no more. New kingdoms rise, noblemen grasp at the new opportunities in front of them, the Keepers must find their place now that they no longer have to hide, and the skaa have to navigate their newfound freedoms. There is also a little more revealed about the hidden society of the kandra. While much of what makes the world feel distinct is how it's people have changed, the elements themselves also seem to shift. The nighttime mists that once sheltered Mistborn start to feel like an impending threat as they remain out during the daytime and may even be taking lives. A mysterious thumping also seems to call out to Vin with unknown intent. Overall, it was just a ton of fun to explore a world that is technically the same, yet also so different from the one introduced in THE FINAL EMPIRE.


With much of the cast already firmly established, the book takes the chance to explore each in greater depth, including those who had more of a background role before such as Lord Venture and Oreseur. Rounding it out are newcomers like Tidnwyl, a surprisingly belligerent Keeper, and Zane, a dangerous Mistborn working for Lord Venture who hears a voice in his head. We finally get to see more of Elend Venture's true nature as he works to set up a psuedo-democratic form of government. This not only gives him opportunity to develop and something to do, but also unites a lot of the members of Kelsier's crew around a new cause: bring about a new order to a world in chaos - one that's fairer to everyone in it. With Kelsier gone, there is also a lot more room for Vin to grow as she is now the city's sole Mistborn and has even taken on a sort of mystic reputation now that there is a faith formed up around Kelsier called "The Church of the Survivor" that gives special veneration to everyone he worked closely with.

While the overall theme of the first book was grounded in taking down an oppressive sovereignty, the focus has now shifted to creating something new. Much of the conflict comes about in how different powers have arisen with different ideas about what a new empire looks like - creating a tension and sense of scale that's somehow even loftier than the original adventure. The cumulative effect is that things are even more dire than they feel before as there is so much more at stake. Fortunately, there's still plenty of in-the-moment humor and colorful imagery to brighten things up.

CONCLUSION
Though the continual rehashing of old ideas is definitely a sore spot for me, the second entry into this series also moves the world, plot, and characters along in ways that feel worthwhile.