A graphic Novel adaptation of the DC ICONS novel by the same name, BATMAN: NIGHTWALKER takes a younger Bruce Wayne and tosses him into a world of maniacs and criminals long before he is ready to don a cape and cowl. 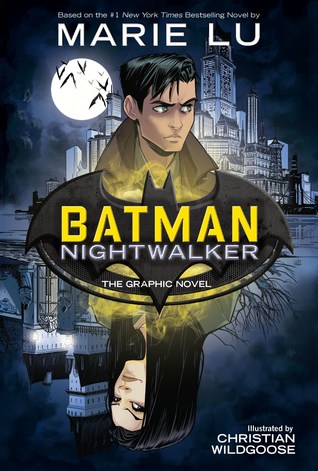 HOW I RATED IT
5/5 Though perhaps a bit slower paced than most Batman fans might expect, the new take on this classic character matched with a strong story structure and simple, yet strong visuals make for a unique read that's suitable for casual readers as well as hardcore fans.

The obvious place to start here is with Bruce Wayne, who has just turned 18 when the story begins. His age isn't the only thing that sets him apart from the character most are familiar with though. Aside from the obligatory flashback to his parents' murders and some occasional moping, this a far more charming and optimistic version of Mr. Wayne than I think has ever been done before. He's still smart and resourceful, but there's also this vulnerability to him that might put him more in line with other teenage heroes. In spite of the book's title, he also never adopts the moniker of Batman at all, though the events largely foreshadow that being his destiny. Joining him are his ever-faithful butler, Alfred, a mysterious and beautiful member of the Nightwalker gang named Madeline, the surly Detective Dracon, and some friends from high school, including Harvey Dent. It's a solid cast that nicely compliments the younger version of Bruce and gives readers a mix of both familiar (yet distinct) and brand new faces.

There's probably not a whole ton to say in this category. Aside from the high-school setting, this is pretty much the Gotham you'd expect it to be prior to the likes of the Joker and other super villains running around in it. The Nightwalkers pose the biggest threat to the city which gives the crime in it a far more organized feeling. The only other thing of note is how much time the story spends at Arkham Asylum which also feels a lot more orderly (more like any other prison).

Overall, I found myself very much comparing this story to early seasons of SMALLVILLE. You've got a younger version of a classic hero who has yet to embrace their famous identity, a ragtag group of friends, a compellingly human villain, and an adventure that get's to the core of what makes the character great without lavishly laying out all the bells and whistles that they've accumulated over the years. The story really takes Bruce Wayne's infatuation with the criminally insane to another level by representing it in the form of Madeline, who Bruce gradually becomes more and more attracted to. A lot of the tension comes from never really knowing what her true intentions are or where their inadvisable romance will lead them (as well as whether it's real or Bruce is just being played). It's not quite as much fun as the Batman/Catwoman dynamic, but it's definitely an interesting way to explore Bruce's pysche that does have narrative payoff in the final act. Speaking of acts, the story is split into five sections which give it a great sense of structure as things slowly escalate until the finale and wind down into the Epilogue.

While not breathtakingly detailed, the art direction is consistent and fitting to the story. I did find myself wishing for a little more color, especially considering how bright and bold the cover art is, but felt pleased with the strong line-work and use of shadows. Yellow is sometimes used to create a stark sense of contrast when things heat up a bit which I thought was a nice touch. I definitely enjoyed the blueish-grey noir-inspired look and understood some reasons why they probably went in this direction for a graphic novel format. It's also worth noting that this art style lends itself to the slower-burn style of old detective stories. The phrase, "action-packed thrill ride!" is used to market the book, but in actuality the action shots are relatively sparse until the story has built up to it's climax. I didn't find this to be a negative at all, but readers taking the marketing too seriously might find themselves let down.

Whether or not you are a long-time Batman fan, I'd say this is a worthy pick up. It feels fresh and special in it's own ways and left me wishing there were more adventures with this young Bruce Wayne to enjoy.
REVIEWS