There are no shortage of box subscriptions out there that contain books and bookish things, but a lot of them are decidedly targeted toward a female audience. Don't get me wrong, I'm not violently opposed to scented candles, frilly packaging, or even romantic YA fiction, that's just not something I'm really looking to subscribe to. Sure there are some options out there that focus on just delivering books, but I kind of wanted little surprise side things too. What I landed on is a service called Culture Carton.


Culture Carton puts its focus on delivering both books and assorted items that seek to help subscribers look, feel, and be more cultured. This consists of one book and a variable number of other items. Generally, these other gifts aren't really related to books at all, but each box does have a theme. When I signed up, I actually opted to get a second mystery box from the pool of previously shipped packages (I didn't get to pick which one, but it did cost the standard fee).

There's nothing particularly special about the box itself. I will note that they packed the two boxes I ordered into this one, so it's also possible that they are normally smaller. 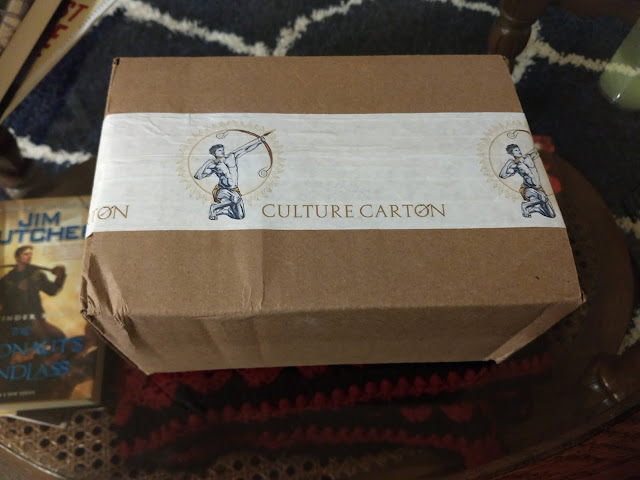 You may have also noticed the crunched edges of the box. This initially worried me, but they packed it up very well and none of the contents were at all damaged during shipment. 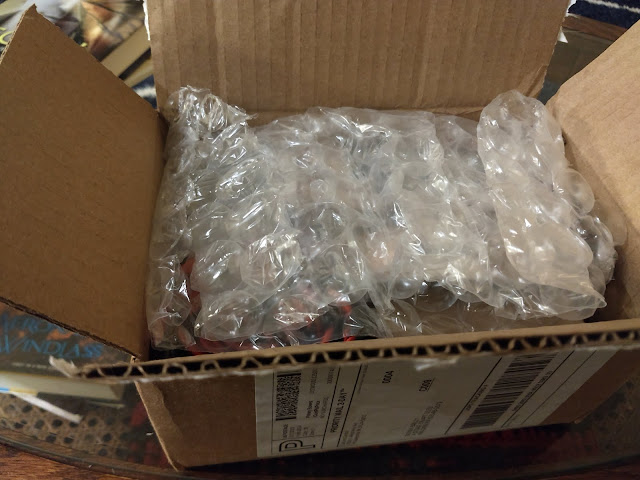 Although they sent both boxes as one, there were accompanying cards listing out the contents of each so I'll break them down separately.

February's box focused on freshening up subscribers' style. The "spoiler" / box summary card is pictured below: 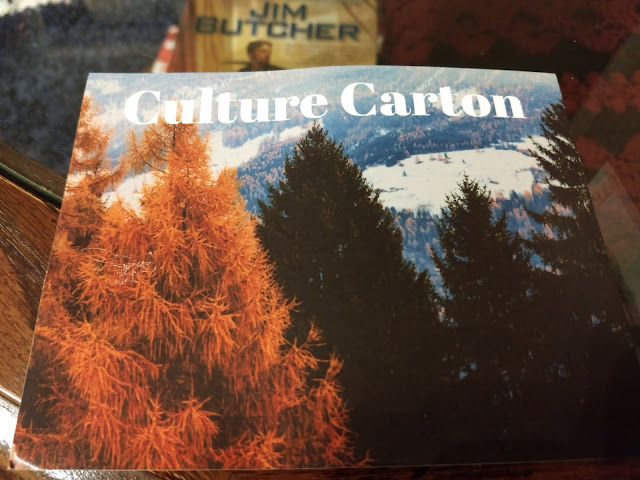 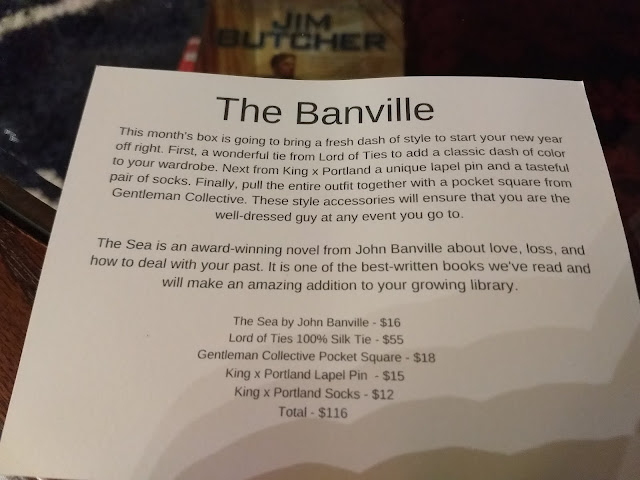 The book of the month is by John Banville (the namesake of this box) who I've never actually heard of so I'm cautiously optimistic that this book will "culture" me even if it doesn't appear to be within my usual range. I'll review it in a separate post. 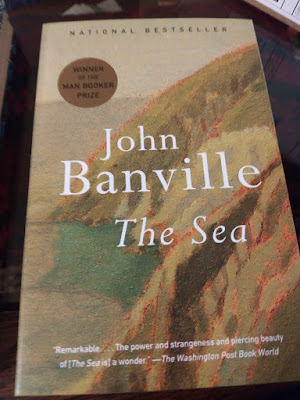 The first gift in the box is a pretty stylish tie. While I haven't had an opportunity to wear it out just yet, I do like the look of it and when I tried it on, I found that it had a nice body to it in spite of being on the thinner/lighter side. 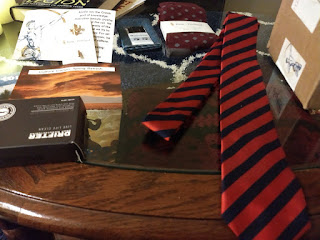 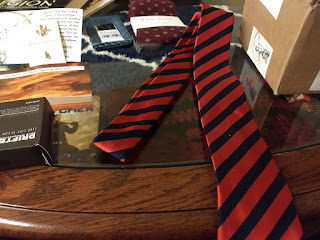 Second in the box is the pocket square. It's definitely an unusual color that I'm not actually sure really goes with the other fashion items as the card suggests, but I do feel fancier for now owning one even though I'll need to YouTube how to actually fold and tuck one of these into a pocket. 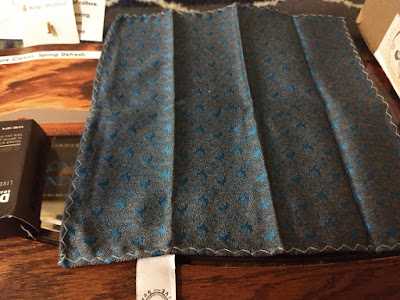 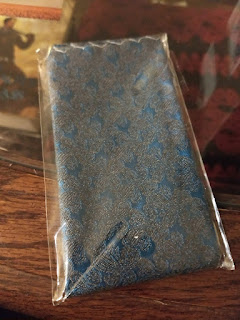 Up next is the Lapel Pin which is pretty fancy indeed! I get the general gist of how you would go about wearing this, but I'll probably still do some research on how/where best to put it on before appearing in public with it. 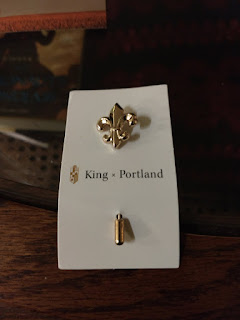 Rounding out this box is a snazzy pair of socks. I actually have worn these a few times now to work. I like that they're sort of an unusual shade, but don't really clash with too much either. They're also really soft. 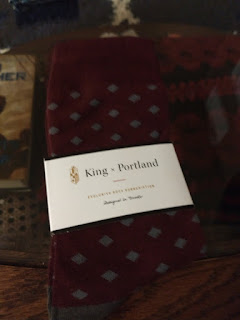 The second box that came is apparently from last Spring. It comes with 3 gifts instead of four, opting for a pricier wallet that seems to make up the difference. 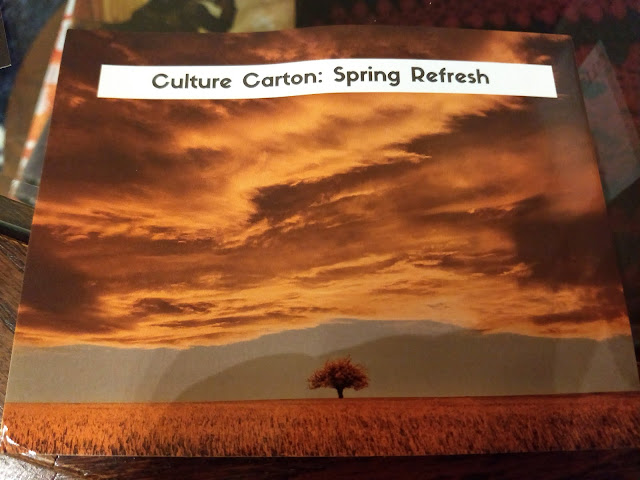 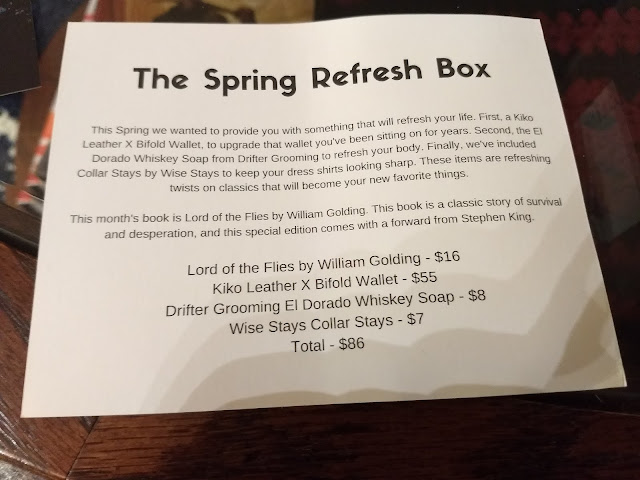 The book of that month was LORD OF THE FLIES which I've already read, though that was in High School and it's probably worth a re-read now. That said, I also didn't own my own copy and this one is much nicer than what we had in class, so it still felt like a worthy addition to my book collection. 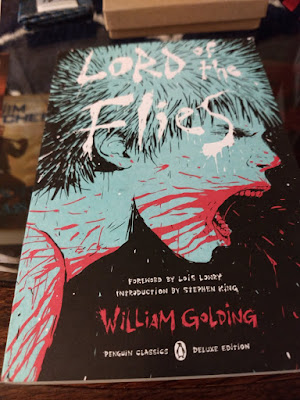 The main event of the gifts seems to be the brown leather wallet. It is really nice in how it feels sturdy but isn't too thick. 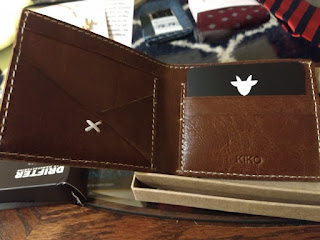 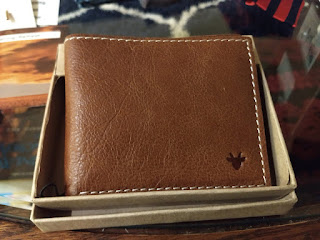 The second item in the box is a bar of Whiskey soap. I've been using this and like all bars of soap, it will eventually disappear into nothing, but I've been liking the unique smell of it and how it doesn't leave a nasty film or anything on my skin. 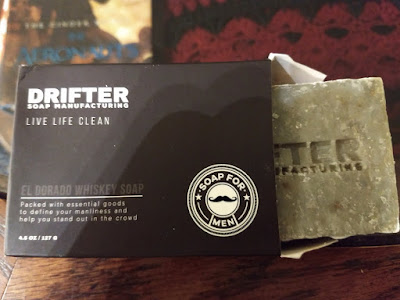 Tying things up is a set of collar stays (little do-dads that you can poke up into the collar of a shirt to keep it crisp if they have the slits for them). I'd honestly never heard of such a thing so I found this one to be pretty cool since floppy collars are pretty annoying. 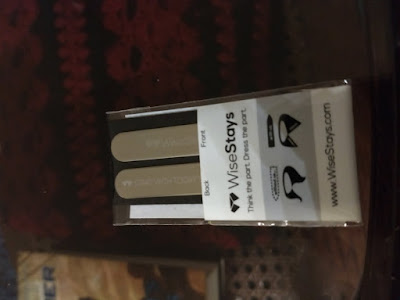 All together, I'd say it was a pretty interesting haul of fancy things and nicely constructed books: 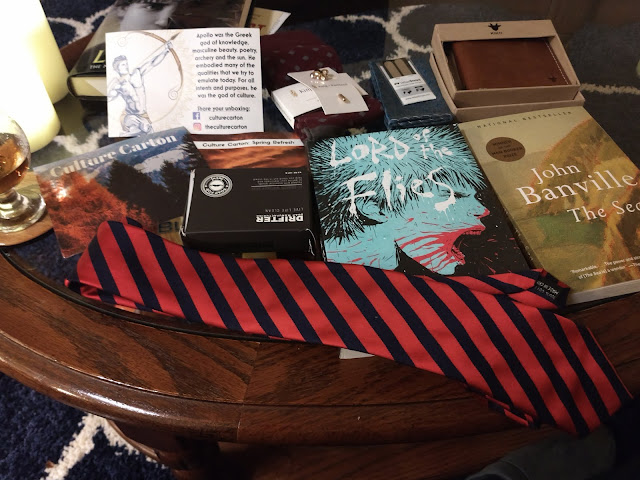 HOW MUCH IS IT?

Culture Carton has 3 different options: one that includes a book and some items, one with just the items, and an option for just the book.

It's an interesting model to be sure. I went with the Standard option but the idea of the Essential option is also intriguing even though that would make it a book subscription service no longer.

IS THE SUBSRIPTION WORTH CONTINUING?

My biggest hangup here is the price point. Yes, all the items and the books themselves are of a wonderful quality and the costs for each item listed on the box summary cards indicate that everything is packaged together at a bargain, but there are less expensive ways to pamper oneself. I almost wish the service wasn't monthly - maybe every other month would work better for me.

Another sort of off-putting thing for me was actually at the point of subscription itself. There appears to be no elegant way to unsubscribe from the service. Should you want to end your subscription you basically do so by sending an email to a designated address. That just feels super weird and wonky to me and actually almost made me abandon at the point of sale. What saved it for me is that there is the option to send a single box as a gift, so I basically did that for myself just so I could get one delivery without locking myself in. There was nothing in the system that stopped me from doing this so I wonder if that's intended functionality or an unintended "hack" that I was able to find - either way, it's the only reason I was able to willing the trigger.

While I found the included items to be very fancy, many of them are really only something I'd be able to use on special occasions. It'll be fun to break them out when those arise, but there's a sense of immediate gratification that wasn't there for me on everything.

Lastly, I found the book choices to just be rather safe. Even looking back through prior boxes they've shipped, a lot of the selections seemed to be things I'd read before or at least heard of one way or another (and perhaps elected not to read). As you may have spotted through my glass coffee table, I definitely like books that are on the weirder and wilder side. While I see plenty of value in reading works that are generally more culturally relevant, I also feel like those are easy enough to pick up on my own. I just didn't get the sense that this service was delivering anything groundbreaking or otherwise special when it came to their literature selection.

I think I would get this for myself again, but it would probably not be on a recurring basis. I might gift myself a single box again as a special treat or even consider the Essential package. If you want to check this service out for yourself, you can find them here: https://www.culturecarton.com