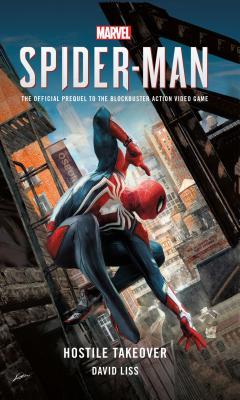 Does whatever a Spider-Novel can...

Serving as a prequel to this year's highly anticipated MARVEL'S SPIDER-MAN, a game exclusive to the PS4 console, this little novel serves as much more than a pre-release cash grab. I actually picked this up after completing the main portion of the game and enjoyed reading through it while waiting for the DLC chapters to be released.

4/5 Although the prose itself lacks any sort of distinct style or flare, this tie-in not only manages to do justice to the characters that appear in the video game, but also introduce a couple that exist solely within this story as well as surprise readers with sudden twists and interesting turns.

The titular Spider-Man and his alter ego, Peter Parker, are naturally the central duo of this narrative, but there are a number of other characters who get some quality time with readers as well. Mary Jane, and Wilson Fisk (A.K.A. Kingpin) get chapters dedicated to shaping their personal arcs while other characters like Aunt May, Norman Osborn, and Scorpion make notable appearances. Seemingly exclusive to this novel are new faces like Maya Lopez, an adopted daughter to Kingpin, Anika, a girl Peter works with who develops a crush for him, and someone who serves as an impostor Spider-Man. All of them are wonderfully represented with the sole exception of Harry Osborn, who players don't actually get to see really in the game as he's already departed for a trip to Europe. I'm sure Marvel tied the author's hands a bit when depicting this character so as not to spoil the surprise twist he's involved in during the game's after-credits scene, but given that this novel is both the first and (sort of) the last time we get to see this version of the character, I wanted his inclusion to have a little more impact, especially when he and Peter say their goodbyes to one another.

New York is just as vibrant and alive here as it is in the way it's depicted in-game. The story takes readers to all sorts of different corners of it from Fisk Tower to The Bar With No Name and a number of different restaurants that, real or fake, give you the distinctive sense that this is where Spider-Man and friends eat, sleep, and breathe. There's also a fantastic number of little side references and "easter eggs" scattered throughout such as mention of The Avengers Tower and reflections on various super-criminals that Spider-Man knows. Different parts of it are explored through the different characters which gives you this sense that it's so much larger and perhaps more important than any one of them.

What surprised me the most is how this story proved to be so faithful to the experience players have in-game, while also serving as something wholly it's own. The writing captures everything from the kinetic fighting style of Spider-Man to how important his in-mask cell phone is to how he interacts with the people in his life. I also loved the way perspective shifted around from character to character, much like how players will sometimes take control of one of Peter's friends for brief sequences in the game. It all just works without ever feeling like you're reading some cheesy description of what you'd see on a TV screen. Fortunately, the meat of the story is just as well done with information about the Spider-Man impostor slowly divulged, the rivalry between Osborn and Fisk brewing to a boil, Spider-Man's relationship with Officer Yuri Wantanabe being established, and turning what could have become a very tropey love triangle into something quite unexpected. The ending doesn't pack the same emotional punch as the game's narrative does, but there are still some great twists and high-energy moments that give it a proper finale even if the bigger conflict with taking down Fisk is saved for the opening chapter of the game.

CONCLUSION
If you either have played, or plan to play MARVEL'S SPIDER-MAN for the PS4 then this is a very worthy and (at the time of writing this) cheap book to pick up. The writing is about as mass-market as it gets which did bother me a little, but I was impressed by the overall tone and how the narrative defied some of my expectations. It's a worthy enough Spider-Man story even if you aren't into games, but it is important to be aware that the full resolution to the Spider-Man vs. Kingpin narrative is saved for people playing the game.
REVIEWS