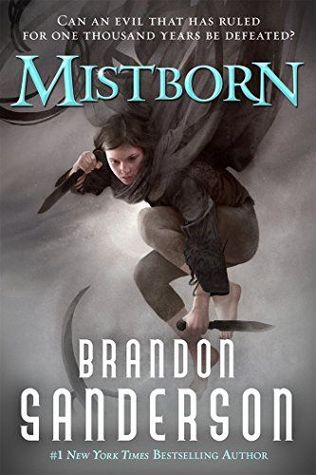 Of metals and men...

As a big fan of Sanderson's short fiction, it was high time I dove into one of the landmark series that put him on the map as one of the big names in Science Fiction and Fantasy.

4/5 With the minor (yet, for me, bothersome/distracting) gripe of how often passive verbiage is used (ex: had told vs. told), this is by far one of the most gripping fantasy novels I have ever read.

Normally, I start a review with the characters in the story, but in this case, the setting of MISTBORN is so monumentally important that it deserves to come first (an impressive feat even for an author that's well known for his world building skills). Part of what helps here is that there is no major exposition dump and while the inner workings of the world are intricate, nothing is so complex that it distracts from the events within it. The core premise is that this is a world where a chosen one went to do battle with a daunting force for evil. While it seems that the hero may have "won" against the threat known only as "The Deepness" he also appears to have become a dictatorial villain in his own right. The resulting society is one where the noble houses hold lavish parties and conspire against each other while the "ska" slave away beneath their rule.It's also one where the grass was literally greener in the days that came before The Lord Ruler's regime. Ash falls from the sky like rain and the sight of vegetation that isn't brown or grey is a marvelous thing to the people of this age. The economy is based upon the trade of goods and there's a delightful magic system based upon different metals that certain people known as Mistings (more common and able to "burn" one metal) or Mistborn (very rare, typically born of high nobility, and able to make use of all of the metals). It's a fascinating place steeped in rich lore that I imagine will require me reading the full trilogy to fully understand.


Equally as layered and nuanced as the world are the various characters who live within it. The story primarily stars the charismatic Kelsier, a Mistborn with rebellion on his mind and revenge in his heart, as well as Vin, a thief who's grown up with some serious trust issues, but a solid head on her shoulders and sharp wits about her. The two take on a master-apprentice relationship and I found it endearing to see how they each help the other grow over time. There are some other great characters mixed in as well like the wise and loyal Sazed, the eccentric Elend, and Kelsier's ragtag team of Misting thief friends. Without dipping into spoiler territory, I'd just say that I was impressed by the amount of depth each character had as well as how much potential some of them have for the sequels. They all managed to feel familiar, relateably flawed, and none of them fit too comfortably in any pre-existing archetypes which made for some nice diversity in the cast as well as the sense that you never know exactly what they're going to do. The Lord Ruler himself also proves to be a very intriguing villain and I loved the short journal entries from The Hero of Ages that mark the beginning of each chapter which hint at the backstory for how a conscientious hero could become a brutal tyrant.

While the setting of this novel is decidedly dreary, the overall tone of the narrative is actually quite hopeful and occasionally ponderous. Kelsier and his band of unlikely rebels take on the seemingly insurmountable task of bringing down The Final Empire. The early sections of the book divulge portions of Kelsier's crazy schemes while also setting up the rules of Allomancy, the story's magic system. Things do eventually start taking some dramatic turns that throw serious wrinkles and tears into the gang's carefully laid plans. The pace continues to intensify until the final moves are made and the fate of the heroes is determined. One thing worth particular note are the spectacularly detailed action sequences that are spread throughout the narrative that not only serve to keep things high-energy, but also give you a very tangible sense that danger lurks around every corner.

CONCLUSION
I'm not sure if I've ever read anything that packages a fully realized fictional world, complex characters, and a well-defined magic system together in such a way that it works so seamlessly with the main narrative. Usually one aspect shines while another is overshadowed, but that's not the case here at all and the end result is a fantastical adventure unlike any that I've enjoyed before. Although I did nitpick the writing itself above, I should be clear that it's very serviceable and Sanderson's distinctive literary voice is always a pleasure for me. Anyone who likes a good work of fantasy would be sorely missing out if they do not pick up this series. I'm fiercely looking forward to catching up on the rest of it myself.
REVIEWS