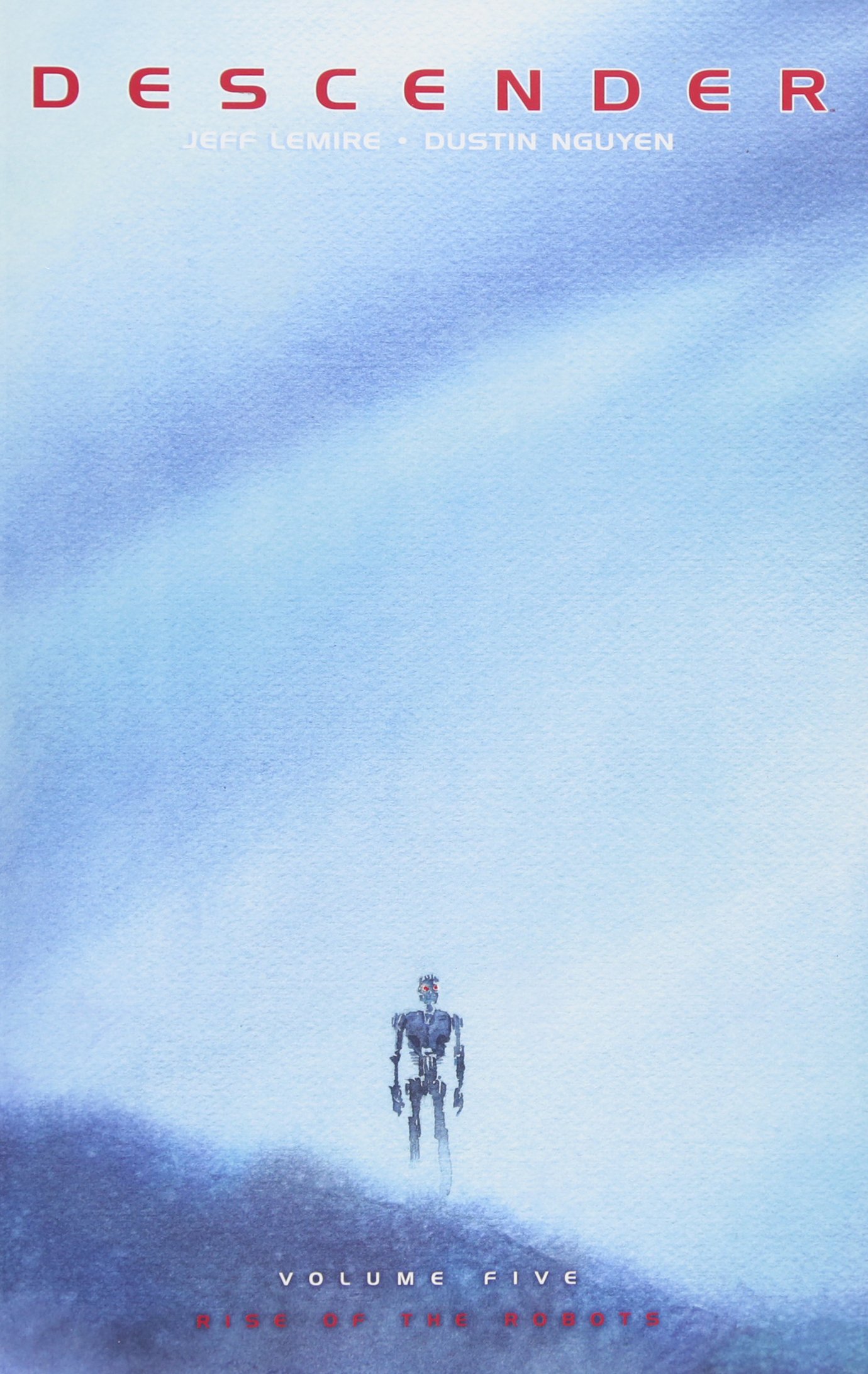 The fifth entry in this series keeps with the momentum that's re-established in VOLUME 4. The war between flesh and metal officially kicks off and there'll be no turning back.

5/5 High quality art, high octane pacing, and some fulfilling payoffs make this one of the strongest volumes in DESCENDER to date.

Tim-21, Telsa, Quon, Andy, Eff, Driller, and the rest of the gang are back as Psius pulls the final strings to send the universe into chaos. As with before, perspective jumps around to the different parties: with Telsa and Quon struggling against the unhinged Tim-22, Tim-21 trying to escape Psius's ship to rescue them, Driller exploring a strange planet with his new friend, and Andy, Eff, and co. brought aboard Nagoki's flagship. It was cool to finally see Telsa's stern father in action as fleet commander as well as rewarding to have a brutal confrontation with Tim-22. I also enjoyed the emotional roller coaster that Andy has to go through as the world as he knows it shifts around beneath him. 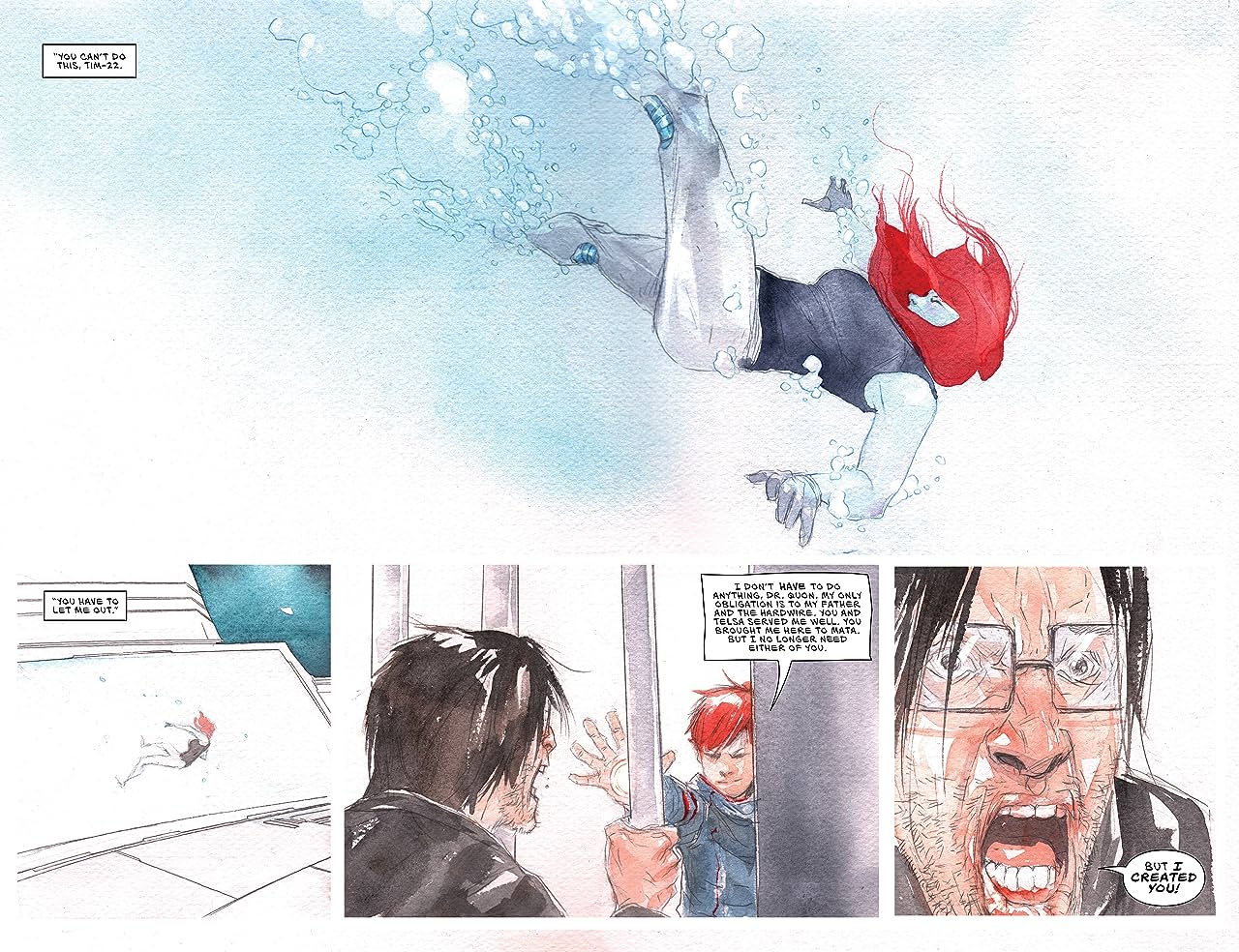 Much of the story takes place upon various starships, but there's a generous amount of alien scenery to enjoy as well. One planet of particular note is Noch, the planet that Driller and his friend traverse through. This one will be of special interest to fans not only because of how it serves as the backdrop to some character development for Driller, but also because it introduces magic to this universe. It's home to goblins that hurl spirit bombs which turn their victims into more spirit bombs as well as vampires that make their home beneath sinkholes, waiting to devour any unlucky enough to fall through. Though this planet is only featured for one full issue, there seems to be a lot of potential that it introduces, perhaps something that's being saved for after the Harvesters - assuming there is something to come after their arrival. There are also some interesting developments beneath the surface of Mata, but to say any more there would be approaching spoiler territory. 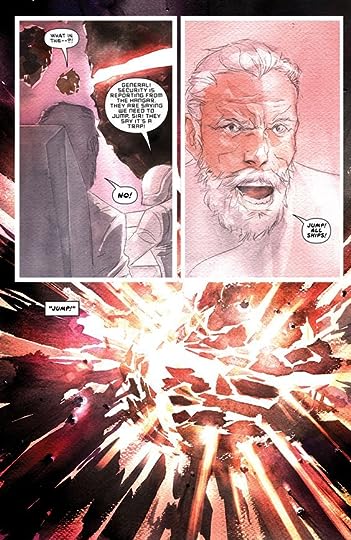 As I mentioned before, the plot progresses very nicely and rapidly. Things have all begun to come together, but there's also much more to come. This volume lays down some hints at what some of the secrets might be regarding Tim-21's connection to the Harvesters, Psius's full intentions for living beings, and what makes Mata so central to everything. Driller's issue feels like sort of a stray side-story, but I imagine that it's setting up some important things to come as well. Chaos is the ruling force now and from here to the finish line, it will be a desperate race to stop the destruction of organic life. Readers are left with some cliffhangers on that front, but that will just make diving into the sixth installment all the more enjoyable.

Everything from the subtleties in Tim-21's facial expressions to the watery depths of Mata and Driller's violent encounter with a goblin camp is rendered as lovingly as ever with the watercolor-esque style that the series has become well known for.

If you've been with the series up until now, this will have some of the important payoffs you've been waiting for. It does an excellent job at depicting the early stages of the organic/synthetic war while also teeing up whatever grand finale to the conflict the creators have in store. I found myself engrossed in everything going on here and I'm eager to see what comes next.
REVIEWS