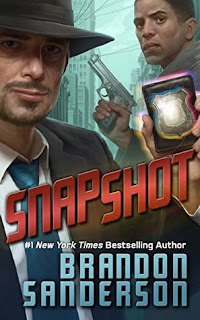 
INTRODUCTION
Detective dramas are nothing overly special to anyone who's a fan of contemporary novels, television, or film. Shows like CSI have formularized this kind of story to an extent where it sometimes feels like the genre that's all about mystery has very few surprises left to share. Brandon Sanderson takes some of these expectations and tropes and plays with them in some interesting ways in his novella, SNAPSHOT.

5/5 Part cop drama, part science fiction, and arguably part speculative fiction as well, this piece of short fiction makes the most out of it's bizarre concept and toys with some interesting ideas about life and how our choices affect it.

Detectives Davis and Chaz are the only real people in a simulated world where all of the people and events of a particular day play out just the way they would have in real life unless the detectives create "deviations" through actions that they take which would not have occurred during the day that they're reviewing. Their mission is to solve crimes by visiting where it happened, when it happened. Although this sounds strange and exciting, like THE MATRIX with detectives, the story humorously depicts how the job is actually pretty boring for these two. "Snapshot duty" isn't really viewed as real police work since the crimes have already happened and the real detectives have already figured out who probably did it along with where and when the crime took place. All that's left for Chaz and Davis to do is show up and perform preordained tasks like bearing witness to the crime, or following a murderer to see where they dumped the murder weapon. The only thing they really need to worry about is making sure their presence within the events of that day does not trigger deviations which lead to events turning out different than they did in real life. I found the banter between them to be both funny and useful for understanding the way these Snapshots work without having a tech-heavy exposition dump. I also enjoyed the way it's slowly revealed how each of these men found themselves stationed as a Snapshot detective and how those pasts played into who they are in the present tense of the story. Davis's arch felt especially rewarding though I would maintain that they are both main characters as is the case with a lot of detective serials.

The world of the Snapshot is definitely weird. Virtual realities and such may not be groundbreaking, but I can honestly say that I've never read one of those kinds of stories where the "virtual" world is actually comprised of physical matter. Every person Davis and Chaz meets is sort of a clone of their real-world counterpart, everything they touch is actually there, and everything they eat provides very real sustenance to them. It's a bizarre twist on this type of a setting that builds up to some dark implications when it's revealed that the detectives must "shut it down" at the end of each day. Sanderson explores these through Davis as his perception of reality grows murkier with each passing moment. It's a fascinating world that is mercifully unhindered by explaining the finer points of how the snapshots work or even building out complex politics. It all feels very relateable in spite of it's pseudo time travel  strangeness and while it does require some suspension of disbelief, the landscape starts to take solid shape shortly after the story begins.

At it's core, Snapshot is a story about two detectives cracking a high-stakes case. They find a lead on a dangerous serial killer they're not supposed to know about and can't resist the prospect of seizing the chance to find something out about them that will help end their reign of terror. Along the way is some funny social commentary, excellent character development (especially when it comes to Davis), and plenty of mystery and suspense to fill the pages. Somewhere along the line, readers will get a sense that this is not quite like the sort of detective stories they've grown accustomed to. There's this foreboding sense that something is just not what it seems (even for a world like this one), but the ending still managed to sneak up and surprise me in some awesome ways. If there's one thing this story does right, it's setting firm, albeit predictable expectations and then dashing them in the most unexpected way possible.

CONCLUSION
If you're just in the market for a good, fun read then this one is probably an instant winner. The characters are great, the world is intriguingly dark, and the sinister twists the story takes make for an explosive ending. I feel like this one could appeal to a pretty wide audience and I'm quite pleased that I randomly stumbled upon it and gave it a chance.
REVIEWS