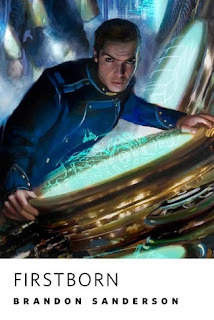 5/5 A little bit of STAR TREK, a little bit of ENDER'S GAME, and some GAME OF THRONES style politics thrown in for good measure makes for a short story that's entertaining, bright, and to the point.

Technically this would be categorized as a "novelette" (a story that is about 15,000-20,000 words in length), but I've always had a hard time recognizing this category of fiction just because it really feels like a longer short story whereas a novella distinctively sits between a story and a full novel. For all intensive purposes, what you really need to know is that this is a very brief read which is great if you're like me and try to balance reading time against a very busy schedule. There's a fair bit of substance packed  into this smaller package which I've found to be a trademark of Sanderson's shorter works of fiction which keeps me coming back for more.

The story stars a young officer named Dennison who, in spite of how hard he studies the arts of war, can never slip out from the towering shadow of his older brother, Varion who has single-handedly managed to conquer the vast majority of non-imperial space. In contrast to Varion's stellar reputation and monumental successes, Dennison fails at just about everything he tries. I found it interesting to be thrown into a world where the hero of the story is so incompetent at what he's setting out to do. More interesting is how instantly likable and relateable of a character he is in spite of his perpetual inability to succeed. He's fully self-aware of all of his shortcomings and finds himself always beneath the pressures of his father (a High Admiral), his fellow officers, and even the Emperor himself. The familial drama is really what stands out here though. It's something new for me in terms of other things I've read by Sanderson and I loved how he pushes it out to an almost STAR WARS esque level of larger-than-life tension. There are also a couple of really nice twists which feel extra special given how they are unwoven in such a small space.

This little gem is not something that should be missed by any fan of science fiction. It has basically everything you could want in a story and manages to even work in some surprises here and there.