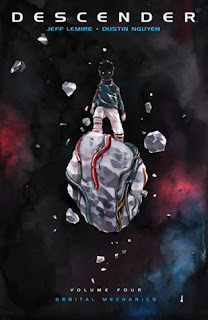 Souls scattered across the stars...

With backstories for Driller, Telsa, Tim-22, Bandit, and Andy/Effie out of the way, DESCENDER VOLUME 4: ORBITAL MECHANICS delivers on some much needed plot development for the larger story of the machine vs. organic conflict. After two whole volumes of this being somewhat stalled, it is finally brought forward in ways that feel important and sometimes surprising.

5/5 This felt like the entry into the series that I have been waiting for. The story is back on track, the art is back on par, and the characters are as good as they have ever been. 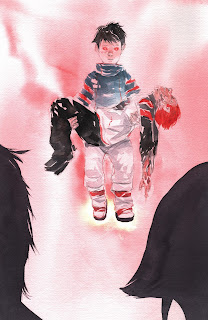 The cast benefits from all the time VOLUME 3 spent on it's more obscure members.The revelations from Driller's issue generate a satisfying amount of drama with Andy and his crew. The results of these pivotal moments drive him, Effie, and Andy forward as characters while also making way for someone new who may or may not become an important player in what comes next. The fight between Tim-21 and Tim-22 concludes, but the end result is not immediately what it seems and both of these companion bots have some some neat twists hiding up their baggy sleeves. Psius is still a bit of a mystery to me, but it was fun to see more of his scheming and I look forward to seeing what frightening plans he has for the future. Nagoki (Telsa's dad and an important member of the UGC) divulges a very important piece of intelligence that connects a couple of important dots regarding why Tim-21 is so important to everyone. The chapters of this volume are definitely a lot more plot/event driven, but there's still some great stuff going on with the people involved along the way. 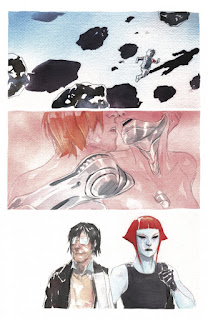 There's a much greater emphasis on the universe this time around. Conversations are had regarding the Harvester threat, characters are trying to reach specific destinations, and the writing has done a great job of making things that happen in one place feel important to another. There's this great inter-connectivity between everything that makes the world(s) feel so much more alive than before. Even back in the first volume it wasn't entirely clear how one thing connected to another, but now, there's a distinct sense of unity across all people, places, and things. This is a good thing because location-wise there's not a ton going on. Most of the action takes place in different starships, UGC bases, and The Machine Moon. These are all rendered with a bit more detail and care than they were in the previous installment, at least. There are also two more exotic planets that the story does go to. One is all water which sounds boring, but story-wise it's pretty cool. The second is a swamp planet which is something a little different from what's been shown so far as well. All in all, the setting definitely takes a higher precedence than before, there is a tiny bit of variation in the backdrops, and there is a little more effort into depicting where all the characters are.

While it could definitely be argued, that this volume is just setting up future installments, I felt as though it was as satisfying as it should be with weaving a compelling space opera while still building hype for what comes next. With the threat of the Harvesters taking the forefront, the overall tone of the story is far more pressing. There's this excellent sense that the characters are racing against an invisible clock and that the shoe could drop at any moment. Although the Harvesters do not actually make a sudden and devastating appearance, there are a number of smaller hammers that do come down which result in there being twists around every turn. There are also some fun side stories that keep things interesting without distracting too much from the main thread - the troubled relationship between Andy and Effie being chief among them. 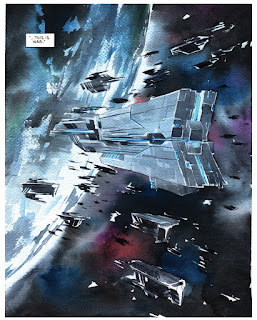 Some of my criticisms about the backdrops being a little bland in VOLUME 3 do not carry over into VOLUME 4. It looked like a bit more time and effort was put into this area of the visuals and there were decidedly more "high budget" shots as well. Sure, there will still occasionally be a character standing in front of nothing but textured white, but this is the DESCENDER style that readers know and love and it's possible that this is the best looking volume to date. My only remaining criticism at this point would be that for some reason everyone has weird-looking hands. They're not anatomically incorrect or anything, they just look like they belong to an old man which might be alright for characters like Doctor Quon, but looks weird for someone like Andy.

It took a while, but I feel like the all the buildup that has been taking place is finally paying off. The characters that were explored in VOLUME 3 all have important parts to play which made learning their backstories feel all the more worthwhile. The dots are connecting and the different locations have converged to one larger stage. The pace has picked up, the twists have increased in number, and there are plenty of new open threads to look forward to.