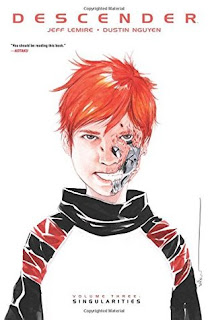 DESCENDER VOLUME 2: MACHINE MOON was a sturdy continuation of the story, but faltered in that it didn't do enough to move the overarching story thread along. My hopes going into VOLUME 3: SINGULARITIES was that this would be rectified. In some ways, I found that it does amend a handful of the things that kept the preceding volume from being awesome, but it wasn't what I anticipated it would be since the story moves forward by actually taking a few steps back.

4/5 While I definitely liked this installment better than the previous one, it still felt oddly lateral in terms of story progression and a little less than extraordinary when it came to it's visuals. 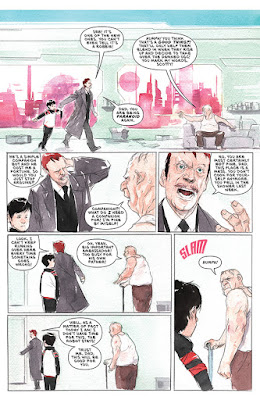 This series has always been filled with strong personalities. The key highlight of this particular volume is that it explores the backstories of some of the more obscure and/or mysterious members of the cast. Each of the five chapters spends it's time exploring the past of 1-2 characters (some of them are paired up). They start off in their distant memory and build up to where the are in the present tense of the plot. Bandit, Andy and Effie, Driller, Telsa (and a little of Tullis), and Tim-22 are the featured characters in these singular adventures. Things kick off with a bang as the readers finally get to know what went into Tim-22 becoming such a psychotic murder-bot. I've never been a huge fan of bandit, the barking dog-bot, but his issue went a long way towards endearing him to me and by the end, I could finally look at him as a full-fledged member of the crew. A couple of the other stories tread on some familiar ground, though. We already knew what happened to Telsa's mother so revisiting that  in her chapter felt a little pointless and her story of rebelliously joining the military against her father's wishes wasn't terribly original, but she's such an awesome and visually striking character that this was still a lot of fun. Driller's story also felt a little dull since it explored his existence as, well ... a driller. I wasn't even sure about why the writers devoted a whole section of the volume to him until a pretty awesome twist that comes toward the end. To close things out, Andy and Effie's complex past is explored which felt like a timely series of flashbacks given how unlikable Effie (if that's even her go-forward name) came off when they first introduced her. Overall, I think this series of flashback-centric issues really built out some of the less known and less likable characters in a hugely positive way. 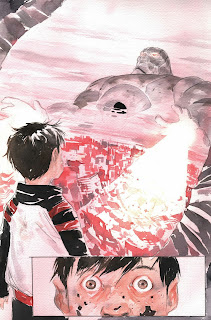 The world is far less important in this entry. There are still plenty of exotic science fiction locations that serve as the backdrop for the memories of the various featured characters. It's just important to note that there isn't anything particularly spectacular going on in this department. A lot of familiar places are revisited like the mining colony Tim-21 and Andy are from, the sparkling hub city prior to the Harvester attack, and some shots of various UGC facilities. There are some new places as well like the refugee camp Andy winds up in and the shady market that Telsa wanders into, but these backgrounds are very much in the background. None are rendered with particular attention to the little details nor is there any special emphasis placed on being somewhere or going somewhere else.

Each chapter plays out in the same format: The story kicks off with a character's distant past and gradually flashes forward from that point in time to where they wound up at the end of VOLUME 2. The formula itself doesn't really feel tedious at all, I kind of liked that they stuck to this theme throughout the whole of the volume, it created some nice cohesion that you don't always find in a graphic novel. What did feel a little off though was actually the glimpses of what happens in the present. It sort of felt like they wanted to give the story some forward momentum even though there was only room for a couple pages per chapter of that content. The result is a sense that these bits are shoehorned in and don't add much value to the overall narrative readers have been following. Had I not felt like things were at such a standstill in the previous volume, I think I would have received this one far better. In my review for VOLUME 2 I stated that I wanted to see things move forward again at the exciting pace that VOLUME 1 set. This certainly does not do that, but I also didn't mind the more reflective nature of the individual stories being told because I felt like there was a lot of progression in terms of unveiling some important information about the various side characters and that this sets them up to play a bigger role in the story proper. 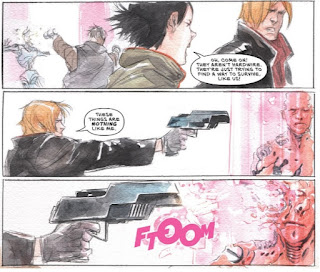 The water paint inspired look is still as beautiful as ever, but it feels a little rushed this time around. There's nothing that looks particularly different or bad and most of the time, characters look perfectly crisp. I think for me, I just felt as though the backgrounds were a bit more white-washed than usual. This isn't anything new for the series, but there's a distinct lack of any kind of "money shots" present. Previous volumes have had a fair number of memorable shots on both the character and environment end of things and I just didn't really note too many of those here. I've also picked up that sometimes people's hands look weird. I couldn't put my finger on it other than to say that it was almost like there was too much detail there in the penciling.

It's not the important narrative push that I hoped for, but there was definitely some important information conveyed here. Characters that have lingered on the sidelines get their time in the spotlight and benefit from some much needed depth. Some of the revelations provided in these pasts feel like they are setting up some interesting story beats in VOLUME 4 so I definitely look forward to those payoffs. Overall, I think this was well done even if what the series really needed was a good push onward.
REVIEWS