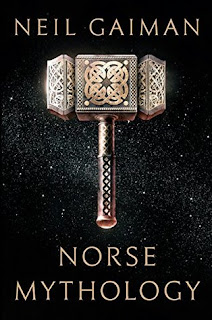 
INTRODUCTION
With the release of Marvel's THOR: RAGNAROK right around the corner, nothing seemed more appropriate than to borrow my roommate's copy of Neil Gaiman's NORSE MYTHOLOGY to read while I ride the hype train. I'm not a huge connoisseur of Gaiman's vast library of works, but I did enjoy reading his novel, STARDUST, and graphic novel, MARVEL 1602. I also love all things mythology so needless to say, I dove into this one with a good deal of enthusiasm.

5/5 Lovingly composed, written with enthusiastic wit, and teeming with all the wonder of the gods and their greatest legends, this take on the classic Norse tales is a must have for anyone who calls themselves a fan of mythology and folklore.

Obviously, the way that "characters" come off in myths is quite different from how they are portrayed in a novel or really any form of modern storytelling. These personalities are certainly distinct, but they won't necessarily have complex backstories or complicated motivations. Most of the gods are quite simple to understand which I have always found gives them a charming accessibility that I don't always find in some of fantasy's tortured heroes. Thor, Loki, Odin, Freya, Frey, Sif, and so many more all appear in their godly glory. Loki has his tricks, Thor has his hammer, Freya her treasures, and Odin his wisdom. In spite of the fact that they are arguably one-dimensional, I still love the whole lot of them just because they are so much fun. Their adventures are wild, their antics can be hysterical, and the cruelty that they sometimes exhibit can be genuinely shocking.

The world of Norse mythology is probably one of the coolest to be found in all of the world's ancient religions. Sure, the Greek pantheon had Olympus and the underworld, and yes Egyptian tales could go to some pretty wacky places, but the world of NORSE MYTHOLOGY spans a variety of realms, each of them connected to Yggdrasil, the impossibly giant world tree. The shining halls of Valhalla, towering walls of Asgard, icy peaks of Jotunheim, and harsh landscape of Midgard all have their place in these stories. These lands are vast and dangerous and filled with enough secrets to keep these pages chuck-full of surprises. Sure, it pretty makes no sense how anything works here, but this is still one of the coolest worlds ever, even when stacked up against some of the most creative universes modern fantasy has to offer (probably because it just causally breaks all the rules of modern sense).

What really makes this particular version of the classic myths special is Gaiman's eloquent use of the English language and his mastery over the art of sarcastic humor. From the very first story, I immediately realized how perfect Gaiman is as a storyteller for these tales of old and I loved how he gave them a fresh new take. This is far from your textbook collection of myths! Gaiman takes some minor liberties with things (he admits so right from the get-go) but even if your a mythology purist, I feel as though you will still appreciate how right Gaiman gets the overall feel of things. He doesn't shy away from portraying the gods as the brutal barbarians that they can sometimes be and really plays up some of the darker humor though it's all done in a way that feels almost relateable in addition to entertaining. I got the sense that he had an especially fun time with just about any moment involving Loki, which is great since he has always been my favorite god in this pantheon.

CONCLUSION
This is definitely very different from the characters and stories that Marvel fans will be familiar with, but I think this could be a lot of fun for that crowd especially if they are interested in the original tale of Ragnarok or the gods in general. Really though, I think this can be a fun read for just about anyone who likes a good collection of stories. Gaiman's whimsical style won't really help if you fundamentally hate the way that myths tend to read. These are still pretty implausible stories featuring characters that don't necessarily develop or grow in any way, but I really do think everyone should at least give this one a shot, especially since this version of these stories almost has a fairy tale sort of vibe to them. If you're already on board with the magical world of myths, then you'll certainly be right at home and I think you'd be hard-pressed to find a more enjoyable version of these stories than what Gaiman has put together here.
REVIEWS