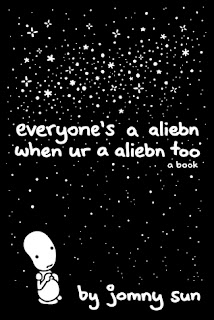 Our world through the eyes of an alien...

No I didn't make some horrible spelling blunder in the title of this post, you're actually reading it exactly as intended. Given to me as a parting gift from a friend at work, EVERYONE'S A ALIEBN WHEN UR A ALIEBN TOO, is a charmingly misspelled adventure into the human experience. It's a piece of fiction that will warm your heart, make you chuckle, and slap you in the face with sorrow, often within the span of a single breath. It's honest and heartfelt in all of the ways that count with some adorable visuals and bold typography to go with it. While some would rightly argue that this is actually more of a graphic novel, the way it's formatted is actually far more like a children's book, just one that's written for adults.


HOW I RATED IT

5/5 Though it can occasionally be found guilty of overreaching, this is one book that should really be read by anyone who has even a Grinch-sized a heart. 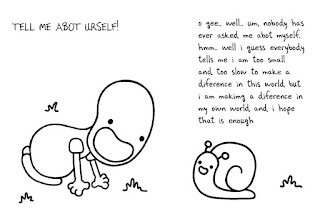 The story stars Jomny, an alien who is considered strange even by his fellow aliens. He is given an assignment to live on Earth and study humanity by trying to immerse himself in it. What sets Jomny apart from his colleagues and people in general is that he has a genuine and unrelenting curiosity in those around him. While this trait is off-putting to the aliens he works with, it's appreciated by the inhabitants of Earth who are often so encumbered with their own business, they don't take enough interest in one another. It's also part of what makes him so endearing to readers.

Along the way, Jomny is joined by a diverse selection of sidekicks including a lonely tree, an artistic otter, who insists that it is pronounced as "auteur," a hedgehog who aspires to make art, an egg afraid of what it will hatch into, and a hunky flower adored by his entourage of bees. All of these side characters seem to represent different aspects of the human experience. The egg for example, is so concerned with what it will become that it utterly forgets to embrace what it is right now. Each of them has interesting commentary to offer on the topics of love, life, friendship, loss, and many more. You'd be hard pressed to make it through this book and not have one of these characters hit home.

The world of this book is largely minimalist. Most of the events seem to take place in forested or otherwise natural backdrops. The front of the book includes a map of Earth that's not exactly what you'd expect. You get the sense that the globe is far smaller than the world that we live in. This scale fits with the tender, close-knit theme that the story quickly develops. Although world-building isn't really the central focus of the narrative, I think many will still find themselves enamored with the innocent simplicity of this universe. 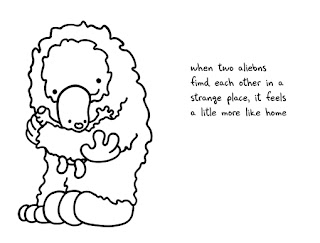 Sometimes cheerful, sometimes sad, always reflective, EVERYONE'S A ALIEBN WHEN UR A ALIEBN TOO, brings readers on a calming stroll through the landscape of human emotion and desire. The book boldly takes on on some incredibly complex and difficult ideas and doesn't really pull any punches in doing so. The overall tone manages to stay mostly lighthearted, however. This is largely due to the fact that Jomney looks at life through the lens of someone who understands things the way a child does. Our world is new and utterly unfamiliar to him. This allows the readers to approach these complex subjects under simplistic terms. While some may feel that the author is a little presumptuous at times especially when addressing things like how life began and what happens once it ends, this formula will generally resonate with readers.

As someone who reviews graphic novels, I generally put a fair bit of stock in how lavishly detailed the imagery is. In the case of EVERYONE'S A ALIEBN WHEN UR A ALIEBN TOO, I am approaching my review of the book's visuals in a much different manner. The point isn't really that the art is all that stellar. With the exception of some lovely diagrams that come at the end of the book, the illustrations are decidedly childish. It's all done in black and white with thick black strokes shaping the characters and what scenery is placed behind them. The one word that comes to mind for me is "appropriate." The simplicity of the art matches up wonderfully with the childish earnestness of the book's overall tone and never seems to fail to convey exactly what I felt like the story was trying to make me feel. It should also be stated that the art is absolutely not sloppy. Each image is carefully arranged on the page and all of the lines are clean. Adding to this is the expertly selected fonts which even get a special shutout in the book's credits. The book would absolutely not have been the same without such a strong visual support gracing it's two hundred and fifty plus pages. 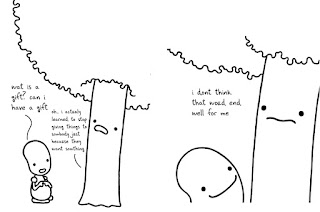 Jonny Sun has written and illustrated a truly captivating journey through the depths of what it means to be a human being. His wit and thoughtful, yet simple examination of all the things that we struggle with is something not to be missed. There are certainly some that will not care to delve into these ideas and others that may be put off by the sometimes-to-definitive opinions the book has to offer, but really anyone who cares about mankind should pick this one up and give it a shot. Due to it's picture book style, it can be devoured in the span of just a couple of hours (even with some pausing to reflect on the narrative's ideas). I found it to be time well-spent and I'm grateful for having been introduced to such an important piece of fiction.
REVIEWS