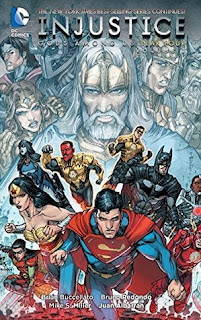 
NOTE
While this review will be relatively spoiler-free, there may be some spoilers for previous volumes in this series.

A new year of Injustice means a new threat to Superman's Regime. This time the theme comes in the form of a different kind of magic...it comes straight from the books of Greek Mythology. The gods of Olympus turn their gaze down to earth and all sorts of discord ensues. Being a big fan of mythology, I've enjoyed the little bits of Themyscira this series shows, but never would I have guessed that it would bring in the entire Greek Pantheon. I'm thrilled that the story took this turn, but given how much I've read about Zues, Hera, Hermes, and company, this collection definitely had a lot to live up to in terms of my expectations.

4/5 This installment follows in the pattern of becoming one gigantic battle. I do think there were some more interesting turns than the last one had, but there still felt like there was something a little lacking here in terms of the overall narrative. 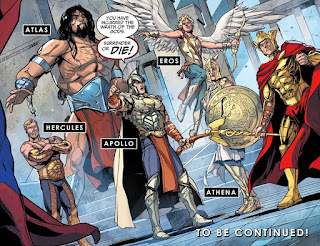 The cast of INJUSTICE gets a whole lot bigger with the inclusion of Greece's most legendary heroes and gods. If you're like me and love the old tales about gods and demigods, then you will be stoked to see that pretty much all of the heavy hitters come out to center stage. Ares, Artemis, Hermes, Hera, Zues, Hippolyta, Hercules, Atlas and a whole army of Amazons enter the fray. They stand against Superman, demanding he abdicate his throne and leave the planet Earth. All of Superman's allies stand beside him out front of the Hall of Justice and Batman shows up with his team to watch in hopes that the forces of Olympus can finally free them of Superman's tyranny. There's a lot of fantastic tension in the air and little breaks in the conflict offer some great opportunities for interactions between different characters. Wonder Woman was particularly compelling due to being torn between two different sides of the battle. This creates some great conflict between her and Superman as she finds herself having to face off against him. There are other great standoffs between characters like Batman and Robin and Hermes and The Flash. It's these little moments where characters clash and try to reconcile that made this installment feel a little more complete than the last one. I did wonder where Dick Greyson went off to since he just sort of seems to go away. Raven also has a cameo that left me confused as to how she'll play into things to come. I also loved that all of the gods felt true to how I remember them from the myths. Hera is manipulative, Ares has his agenda, Hermes is the dutiful messenger, and Hercules is the hero seeking glory through combat. I did note the lack of presence of Athena and Poseidon, but I hope they'll factor into VOLUME 2. Lex also has some more nice surprises for us including a decision which will likely have some ramifications in the chapters to come. All in all, I did find this area of the volume to be pretty satisfying and the gods' scheming was a lot of fun. 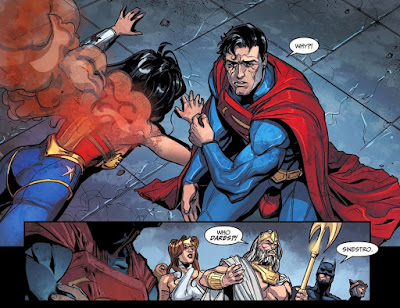 Unfortunately, the setting for this volume does feel a little restricted. The vast majority of it takes place entirely in front of the Hall of Justice. Obviously, this is a really lovely and iconic place, but I did feel like that sense of adventure was a little lost here. Leading up to the grand standoff, readers do get to see quick glimpses of Batman's hideout and some city streets, but these are fairly short-lived. There are some gorgeous shots of Mount Olympus and Themyscira to break things up as well. Basically, all of the locations that do show up are carefully selected and visually interesting, you'd just generally expect to see a few more of them in a world as expansive as the DC Universe. 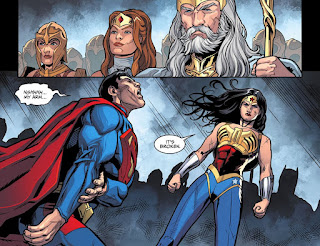 The plot itself is pretty simple and doesn't go too much deeper than what I have described so far. Where most of the story-building takes place is in the conniving machinations of the gods. Each one has their own agenda in mind. This divine chess match really brought me back to the myths of old and I love how faithfully they depicted these interactions while doing it in such a way that fit in well with the story.  There are also the great little moments between characters as well as a flashback featuring Wonder Woman, Superman, and Batman which definitely made the conflict between them that much sadder. Leading up to the main conflict are some fairly compelling moments with Damian Wayne. I've felt like his character has been pretty one-dimensional so far so it was nice to get to see some of his personal struggles and understand what it is he hopes to achieve. Along with that is the demise of one of Batman's particularly vengeful friends . It should also be noted that there is a ton of great action shots in this one. The gods look every bit as glorious in combat as they should and there are some fun match-ups between gods and heroes with similar strengths (or at least levels of strength). Batman also finds himself in an interesting position since it was by his doing that the gods were unleashed upon the Earth, but he has no real control over their actions. He finds himself simultaneously in the most powerful and vulnerable position of his life, especially when some of the gods start trying to go Mortal Kombat on Superman and his allies. Overall, I definitely thought this was paced better than the last volume, but it still suffers a little bit from the fact that it's mostly one continuous struggle that doesn't actually even end by the time the last page is turned. The violence is once again pretty brutal, but it was a little easier on the eyes this time around since some of the gore was a bit dialed back, but there's still some blood that's shed and a couple of characters readers will have to say goodbye to.

ARTWORK
The visuals are probably at the best I've seen them so far. The armor the gods wear is gorgeously rendered. The action shots are dynamic and beyond dramatic. Some of the scenery is really great as well. 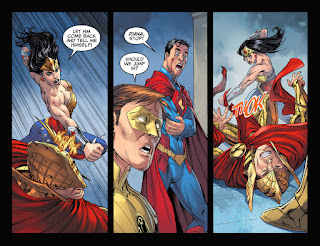 There's a lot of fun to be had here between the gods and the heroes and all the action in between. The story does still kind of feel like it's at a standstill, but this is one conflict I was pretty okay with hitting the pause button for. I do kind of feel like maybe the writers have taken things as far as they feasibly can within the confines of the space they had to work with and are maybe saving some things for the fifth and final year of the comic. If that's the case, then that's kind of a shame since I would like to see things advance a little bit more either on the side of the main narrative or even just in the individual character archs that have all been fantastic so far (the comic's just been a little stingy with rolling them out). I want to see Damian make a little more progress with his identity crisis, I want to witness Wonder Woman and Superman's relationship blossom (right now it's sort of disintegrating), and I want to find out what eventually drives Catwoman to change sides. To me, it feels like the story still has a lot of ground to cover and while I understand that things can't be rushed, it also feels like these large scale clashes are slowing down the thrilling pace that previous volumes set.