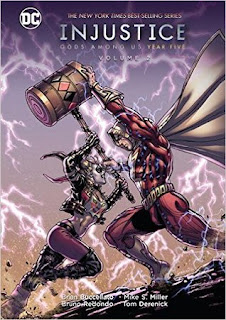 NOTE
While this review will be relatively spoiler-free, there may be some spoilers for previous volumes in the series.

A lot has happened since the Series launched. Readers saw the sad decline of one of Earth's most cherished heroes in YEAR ONE. They watched as The Regime waged war with The Lantern Corps in YEAR TWO and were introduced to DC's magical underworld in YEAR THREE. YEAR FOUR brought forward an awe-inspiring clash between gods and heroes. In YEAR FIVE, things have started coming together. In VOLUME 1, pieces began falling into place, but there were a lot of loose plot threads left by the end. I started in on VOLUME 2, excited to see how those loose ends get tied.

5/5 This deeply emotional entry into the series cements Superman's tyrannical identity while also bringing many of the other characters to the point that players found them. This is perhaps the hardest hitting of the volumes so far and even though it doesn't quite wrap YEAR FIVE up into a neat little package, I did appreciate that the story took some time to slow down and savor each heartbreaking plot point. 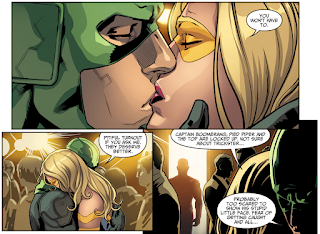 There are a lot of characters that get some good attention in this installment. The Bizarro Superman and his new buddy, The Trickster, go rampaging around, stirring up all kinds of chaos. Since he was created by Lex, there are some interesting moments where the billionaire mastermind has to outmaneuver the super-beings who might expose his secret plot to take down (and replace) Superman. His scheming ways and the hardened morality of this version of Lex clash in some fun ways. Harley 's therapy sessions with a cardboard cutout were both hysterical and genuinely moving. This volume also introduced the first iteration of the Joker Clan, a group of anti-Regime activists whom Harley follows around. Batwoman finally gets a little more time to take part in the drama of it all. She's largely been an accessory to Batman's war this whole time so I very much appreciated seeing her operate on her own a little. A defeated Catwoman also has a couple of small appearances while  Damian makes a key showing for the volume's finale. Batman and Alfred have some amazingly humanizing moments that were probably the highlight of the whole thing for me. It all comes down to a one on one fight between Batman and Superman with Damian standing by in confusion. The last chapters feature Flash struggling with his allegiances and slowly being pushed to pledge himself to The Regime. The internal conflict was portrayed every bit as well as the external conflict is depicted and I don't think these characters have ever been more compelling. 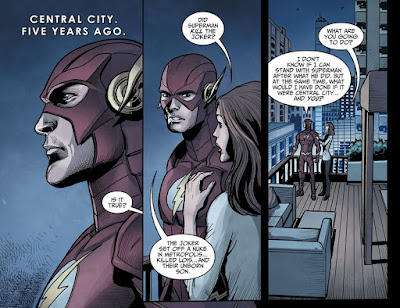 A shadow begins to fall over the world as Superman and his cronies solidify their iron grip while Batman and others do their best to frustrate those efforts. The result is conflict on a pretty large scale. The Joker Clan gathers in large abandoned buildings. Batman's allies brood and leap from towering buildings. Lex scrambles to protect himself in his laboratory/office building while Bizzarro flies from place to place leaving a trail of bodies and destruction in his wake. There are a lot of ominous references to a new super prison, though with the rate that both Supermen exterminate those who cross them, it's hard to imagine there being anyone left to lock away there. Tragedy strikes in the Batcave and The Rogues have a secret memorial service in a shady bar. The epic Batman v Superman showdown takes place in a simple dark alley but The Flash's journey of self-discovery brings him to a number of scenic locations. By the end, I felt as though I'd gotten a full tour of this world which made it that much sadder to know that freedom no longer reigns here. 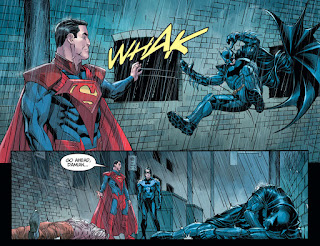 If lines weren't crossed before, they definitely are now. Even some of the most noble heroes have lived long enough to see themselves become a villain. Although previous years have consisted of two volumes, there appears to be a third part of YEAR FIVE set to come out this June. Due to that fact, not everything comes to a wrap in this one. There are still outstanding questions like whether Batwoman and Batgirl make it through the series and what eventually drives Catwoman to join up with Superman. There's also the matter of how the Joker Clan takes its place in the Insurgency. There are, however, plenty of things that do get tidied up. All remaining signs that Superman has any of his former self left are gone. He's become as ruthless as he was in the game and now that he's crossed certain lines, there will be no coming back. Batman finds himself trying to resist crossing a one of his own when misfortune falls upon one of the people he cares for most and Damian's true allegiances are tested as well. Even though I already knew how a lot of these things would turn out, this didn't diminish the emotional intensity of being in the moment with these characters which speaks highly to the writing. I never knew what would happen next and in spite of how much I wanted things to work out, I of course knew that there would not be any happy endings. 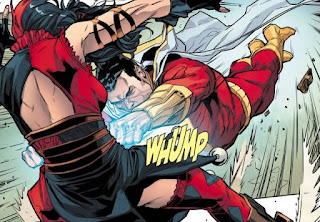 ARTWORK
The art was definitely on point at just about every turn here. A few of the backdrops are a little sparse at times, but that mostly only happened during points where the action shots hit an extreme angle

CONCLUSION
While this is neither an ending to the story nor this series, it did do a nice job of concluding certain story points in a satisfying way. I'm only disappointing that I'll have to wait a bit before the next volume comes out. I'm very glad that this series got as big as it did because it's offered a lot of epic super hero entertainment. I look forward to the next (and maybe last?) installment of this prequel series. In the meantime, I'll be diving into the new INJUSTICE 2 series which fills the gap between games as well as of course picking up the new video game as well.
REVIEWS