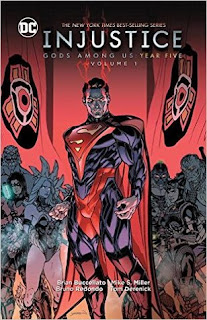 The villains are unleashed...

NOTE
While this review will be relatively spoiler-free, there may be some spoilers for previous volumes in the series.

The final year of INJUSTICE GODS AMONG US begins. At the end of the previous volume, an entire prison's worth of supervillains was set loose upon the world. Now both sides of the Batman vs. Superman war are recruiting from this pool of new faces. With the story getting very close to the point that players found it in the game I dove into this one excited to see the different pieces fall into place.

5/5 Though it's a little scattered at times, there are a lot of fantastic moments in this installment that help drive the plot forward and define the characters in some brilliant ways. 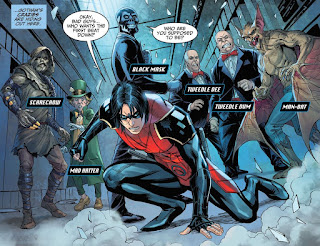 With the addition of all the previously shelved villains, the roster of INJUSTICE gets much bigger. While there are a lot of classic bad guys and gals that never get much time in the spotlight, there are a good number of them who do get some decent attention. Bane and Killer Frost join up with Superman, much to the distress of team members like Wonder Woman and The Flash. Batman has some fresh blood of his own in the form of some of the Flash's rogues like Weather Wizard, Gold Glider, Mirror Master, and Heatwave under the justification that they have a strict code not to kill anyone. Batman's allies are less than convinced by this distinction which made for some interesting interactions within that squad. Catwoman finds herself at wit's end with fighting for what feels like a futile cause. A Bizarro Superman finds his way onto the scene and starts to wreak havoc with The Trickster and tensions run high as a result. Rounding off the ensemble is Damian who finally gets some character development after being stuck in a perpetual cycle of rage and depression. Dick Greyson and Alfred also make some fantastic guest appearances and help drive some of this character building. It's a strong and varied cast of heroes and villains that did feel a little spread out at times, but was handled well overall. 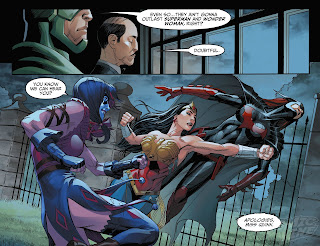 This installment jumps all over the established world. There's a cool fight scene on Penguin's docks, tension in Batman's hideout, and harsh accusations made in Lex Luthor's tower. From the brutal opening at Wayne Manor to the calm infirmary of Damian's moment of self-discovery, the scenery is varied and each backdrop felt perfect for the given moment. There are even some shots of places like The Batcave which brought me back to earlier moments in the story. The world is definitely in disarray and it's easy to see how that chaos is shaping the way that things turn out. The state of things is in direct opposition to the way Superman wants them to be and it will be very interesting to see how he puts them into the way he wants them. More interesting will be how he creates the buttoned-up dystopia that this world is fated to be. 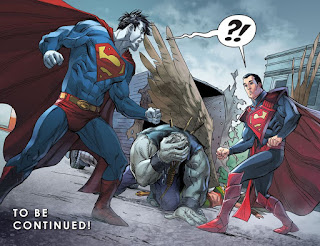 The overall feel of the world is one that's fallen back into chaos. Superman and his allies are kept busy with rounding up all of the escaped villains while Batman and his band of followers are doing their best to ensure that they raise as much disturbance as they can. The involvement of Bizarro only makes things feel that much more chaotic. Even though the villains pick sides, that doesn't mean they are suddenly freed of their own antics and agendas. This added a wonderful layer of unpredictability to pretty much every scene. In spite of Batman's scheming and Superman's control issues, there are just too many loose cannons running around for either of them to really be in control. There's a sense that it will all boil over before the Regime assumes control once more, but in the meantime, it's a lot of fun to simply watch discord reign. There are also some really nice personal moments for characters like Selina and Damian that help keep things grounded.

ARTWORK
While the new character designs were all great and certainly fit in with the INJUSTICE style, there were points where the quality seemed to dip a little or at least where the imagery felt inconsistent. Gold Glider for example looks stunning in some shots and quite bad in others. The Trickster kind of alternates between looking very young and a little older. Make no mistake, the overall presentation is still fantastic. This collection just felt a little less polished than some of the others, possibly because of all the different designs the artists had to keep up with. 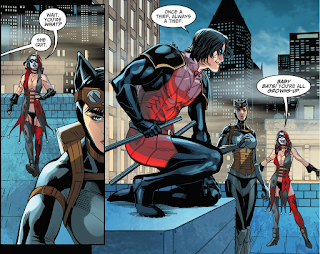 CONCLUSION
There's still a lot of ground to cover before everything falls into place, but this is a solid first part of the fifth and final year of the series. There are tons of great characters, many of which haven't had much face time yet, but there are also some great moments with already established heroes. Very little time is spent in any one place, making the scope of this installment feel much bigger. I loved the chaotic tone of it all as well as the moments of more personal drama. The final conflict between the Regime and the Insurgency promises to be a magnificent disaster to behold and I just hope that the final collection will contain some great emotional moments as well.
REVIEWS