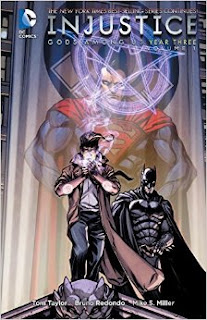 The Green Lantern Corps has been defeated, but Batman's Insurgency managed to capture some of the key figures in Superman's Regime. The truth about Superman's cruelty is revealed to the world, but with the help of a yellow ring, he's more powerful than ever before. Things seem all but lost for the world, but in the wreckage of what's left, the series turns its gaze to a previously under-explored section of the DC Universe, the world of magic.

5/5 YEAR THREE VOLUME 1 makes a very sharp turn away from the action-packed direction that the series has taken so far in favor of a more mysterious noir-type narrative. The changes in tone, pace, and cast help keep the series feeling fresh and I think they did a great job with opening up a new corner of this world.

Ushering readers into the magical side of DC is none other than the magical bad boy, JohnARROW, but this one seems pretty different), but I liked their inclusion all the same. There's also an unexpected return of a character who I'm very excited to see back in the story. 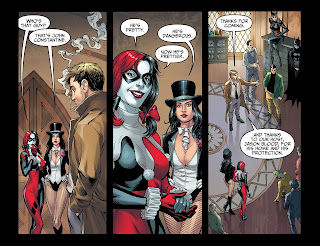 Constantine. He enters onto the scene amidst the rubble of the epic clash between the Green Lanterns and Superman's allies. Immediately, you feel the weight that this character brings with him as well as the odd sort of lightheartedness. This duality made him a very welcome addition for me, especially since I was a fan of his cancelled-to-soon television show (it's up for free on the CW Seed if you were like me and missed it while it was aired). He joins other magic-centric characters we've already met like Dr. Fate and Zatana to introduce the more mystical corners of the world. Batman hopes that exploring these hidden sources of power will be the key to taking down Superman since he is vulnerable to magic. As it turns out, Superman has some magical forces protecting him and pretty soon, Batman and co. find themselves playing yet another game of  cat and mouse with the Regime. The relationship between Superman and Sinestro continues to develop and these moments reminded me of just how naive Superman really is. Harley Quin has plenty of great moments of her own and there are probably a lot of hardcore DC fans who will be thrilled to see more obscure characters given a little time in the limelight like Detective Chimp, Ragman, and Deadman. I didn't know anything about these characters myself (a version of Ragman does appear on the television show, 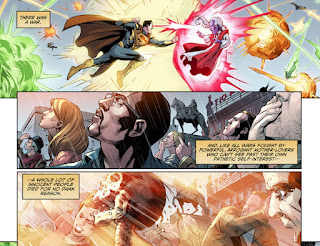 The world has definitely changed again, both physically and in the way readers will perceive it
. Superman's battle with the Lanterns has left certain places in literal ruins. The tangible consequences of such wide-scale conflicts are visually explored without pulling really any punches. Only rubble can be found where buildings once stood and there's far more gore in this volume than there has been in the past. The world is darker and definitely more desperate. From the ashes, characters who were previously hidden are now exposed and that definitely makes everything feel brand new. There's also a sort of horror element that's worked in this time around. A fiery corner of Hell, Raven's glyph-based prison, and even the inside of a character's mind are just some of the weird and somewhat disturbing locations that readers will be taken to. There's this layer of grime that covers everything (sometimes metaphorically speaking) as the darker side of magic is put on full display. Characters make choices which compromise their morality in an effort to outmaneuver Superman and cope with the new terrain. 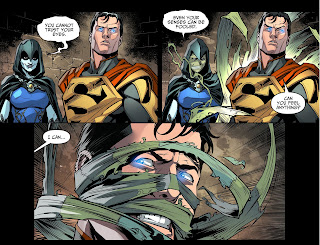 YEAR THREE definitely seems to be taking a sharp change in direction. Given the cataclysmic struggles that YEAR TWO offered, I think it made a lot of sense for them to switch things up a bit. I'm also starting to understand why the creators decided to split the comic up into years kind of like how a television series has seasons, each having a different theme or source of conflict. This approach feels like a smart one and leaves me feeling hopeful that the series will not become stale. I think I've stated before that very little feels off-limits in this series, but that is especially true now that I have read through this volume. I didn't think the story could get much darker, but when you start throwing in Hell, damnation, soul absorbing, enchanted imprisonment, and mind-control as themes, then the boundaries of what's possible certainly get a bit wider. Between the gore and the outright cruelty of certain sequences, I found myself far more surprised than I expected to be at this point in the story. While I'm happy to still be caught off-guard, I do hope that there are lines which won't be crossed or ideas that don't get explored since things got a little satanic in spots. I am interested to see where the theme of dark magic will take the story though and look forward to more surprises in VOLUME 2. 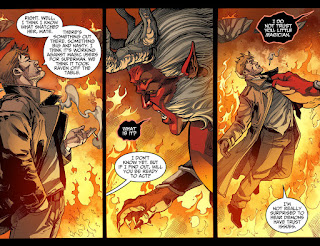 The imagery continues to be spectacular and this time around it does a nice job of conveying the darker, shadier tone that the narrative takes. There are also a lot of spectacular magical effects that offer a little bit of brightness to the dingier locations.

While this probably isn't the next installment that people where expecting, that's arguably for the best. The inclusion of new characters, themes, and locations did a nice job of shaking things up while still keeping the main narrative on track. There's definitely a setup for even more crazy magical shenanigans to come which gives me something to look forward to in the next volume.