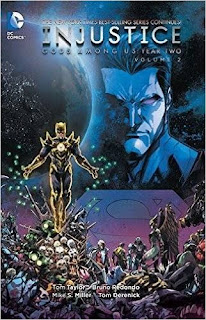 The conflict between Superman's blossoming Regime and the expansive Green Lantern Corps that started in YEAR TWO VOLUME 1 is far from over. Batman's team of resistance fighters are also far from defeated. This volume fully realizes the conflict that's been building and brings readers along for an exciting conclusion to year two of INJUSTICE.

5/5 More amazing art, more brutal superhero combat, and more heartbreaking back and forth between the heroes that used to stand on the same side. This volume definitely follows up YEAR TWO VOLUME 1 in a way that feels every bit as satisfying as it should.

Still struggling with the death of Green Arrow, Black Canary wanders into his former hideout where 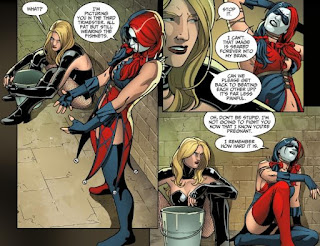 she finds none other than Harley Quinn squatting there. Much of this volume focuses on the friendship that develops between these two very different women. Canary's pregnancy helps establish a connection with Harley who, as it turns out, has a child of her own. I loved that even in the middle of all the violence the writers still took some time to establish a deep connection between readers and these characters. Guy Gardner of the Lantern Corps is another major standout here. I had never really heard about him prior to reading this series, but thought he really shined here in this Volume. His struggle to try to restore order when his two fellow human Lanterns stand against him made him an easy hero to route for and I enjoyed every heartbreaking moment of his time on the pages. Rounding out the cast are Barbara Gordon and Jim Gordon who are also trying to move forward with things against ever-increasing odds. Being a long-time Batman fan, I will always have a soft spot for these two, but thought that their tear-filled arch was some of the best of these characters that I've ever seen. There is also a bonus issue that features Hal Jordan and Sinestro which did a great job of helping build the relationship between them and explain why Hal eventually comes to trust him. There are some other good moments with these two throughout the rest of the volume as well. As with previous installments, there are, of course, a ton of other characters who make important appearances in the story. 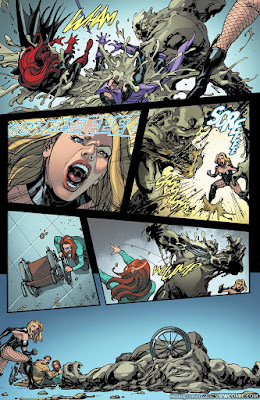 The story takes two different approaches to it's setting. On one hand, there is the cosmic struggle stemming from the Lanterns' decision to mount a full-scale attack on earth. On the other, readers get to spend some time down on the ground with some of  Earth's foot soldiers who are brave enough to stand against Superman. The duality of these two sources of conflict helped keep things fresh and I was glad a little more time was spent building out the street-level conflict since that was largely sidelined in the previous volume. Other, more exotic, locations like Dr. Fate's Tower and The Watchtower are also visited as the volume nears it's climax and the final battle takes place in a location which Green Lantern fans will enjoy. It's inclusion does a nice job of illustrating that this world is both very similar and starkly different from the one that DC fans have come to know and love.

Things somehow manage to feel so much more dire in this volume. Stakes seem higher and the various story arcs were a lot more personal. Superman continues to grow both in influence and brutality as he allows people like Sinestro to advice his Regime. The idea that the Earth is all but lost is explored a great deal here and as a reader I definitely got the sense that Superman has all but won. There were also some devastating goodbyes to characters that broke my heart a few times over. If there's one thing this series excels at, it's driving that literary knife into you and giving it a couple good twists. At this stage it really does feel like anything is possible given that this is not the "real" DC world and the creators have grown more comfortable with exploiting that fact. Having played the game, I know which characters are safe in the comic, but that doesn't really make things any less intense for me since the story still takes some surprising turns.

The art continues to be crazy detailed. The artist/style does seem to change for one issue randomly, but it was just as good as the one which appears in the rest of the chapters. There's not much to say here other than that this area continues to be one of the major selling points of the series for me.

This volume builds upon those that came before it in a brilliant way. The conflicts that have been building and character arcs that have been developed are brought to a head in this installment. Chaos and heartbreak are doled out liberally, making this one of the heaviest entries in the series to date.