THE FOREVERS is an odd series I discovered while wandering around a local comic book shop. The strange art style and mysterious premise grabbed me as well as the fact that the series is pretty new. It's probably a little outside of my usual comfort zone as far as language and overall mood are concerned,but I'm giving the series a chance in the hopes that I've found something different and special. 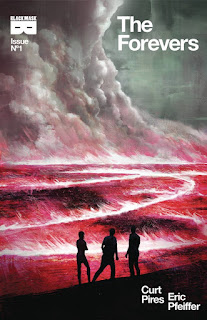 Right off the bat, this issue slams it's readers with strange and striking imagery. It quickly flaunts a sort of hazy realism in it's art style and a wastes no time in establishing it's dark and depressing tone. The overall premise is that this friend group gets together and seemingly casts some kind of spell, referred to only as "The Ritual." The idea is that all of them will become famous as a result, but none of them really know what comes after that. As magical pacts go, there is always a catch and that is where the story picks up. The primary character in this story appears to be Jaime. He's a rough-around-the-edges rock star who while not past his prime, does seem to be a little washed up. He's slipped pretty deep into substance abuse and even deeper into self-pity. The issue delves into his toxic relationship with Kate Sage, one of the seven involved in The Ritual. Overall, things are pretty bleak, and they don't get much brighter when the story shifts focus over to Daisy Cates, another one of the seven. Things do take an interesting turn though when it is revealed that someone is out to kill these former friends and current superstars. One of the seven dies a fairly gruesome death, apparently at the hand of someone they know. This sets up future issues to be far more interesting as the group will likely discover that their fame has consequences beyond the fact that it has led some of them to self-destructive tendencies. Bronson Pierce is introduced at the very end and it feels like he's been expecting something like this to happen. After going through this moody first chapter, I definitely felt intrigued to move forward. The art alone is pretty compelling and I'm hoping that the series dives a little deeper into the dark mysticism that it's introduced.

PLEASE NOTE: Going forward, the reviews of each installment will have spoilers for those that came before. 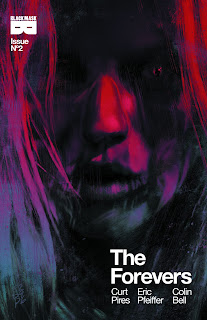 This issue picks up right where the last left off. Jaime is in rough shape after his wild attack on a fellow rock star, a stunt that soils his public opinion and sullies his comeback performance that night. Immediately, I found the way the panels cut between two different scenes simultaneously to be kind of jarring. The art does it's best to reflect the different sequences happening in unison by changing the colors and lighting, but I still didn't care for this more hectic approach to the page composition. Sure the way they did the first one was a little weird too, but I found myself having to stop just to try to get my bearings on who was doing what and when. It doesn't help that the first couple pages do this with a scene from the past and the present, while the rest seem to be exclusively in the present tense. Weird visual storytelling techniques aside, I did still find this issue to be pretty good and I guess in a way, I liked that it had a confusing feel. The imagery gets weirder in spots and they definitely deepened the sense of magical realism that the first issue mostly hinted at. In the wake of Daisy's murder, Bronson is in full-on rich detective mode and even displays some kind of super strength when his own safety is threatened. An attempt on Kate's life brings Jaime back from his international rehab and I will say that it was pretty rewarding to see these two make up a little especially after their bitter parting in the first issue. The ending left me even more intrigued and will hopefully provide the story with some much needed focus now that the threat has been sufficiently established. I'm excited to see where things will go with this series and to find out who is hunting these characters. 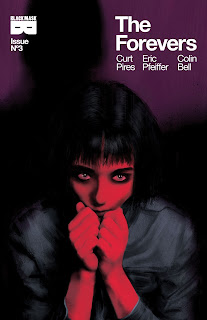