Neil Gaiman is one of the most widely praised and beloved authors of our time, not to mention one of the most diverse in terms of his writing resume. His work spans from novels to comics and even illustrated children's books. All of this said, I've never actually read much of his work. The only thing I've ever sampled was his comic issue, "A Black and White World" from the BATMAN BLACK AND WHITE series, which was really just okay. It was kind of a prolonged gag or spoof that wasn't as clever as it thought it was. So as far as first impressions go, I was woefully underwhelmed and it doesn't help matters that I rarely enjoy things that are widely celebrated. I'm not a hipster or anything, I think stuff just gets over-hyped for me and then fails to live up to the grandiose expectations that I've set for it. Ultimately though, I DO want to give some of his work a fair shake, so I've decided to do so with one of his novels and one of his comics/graphic novels. 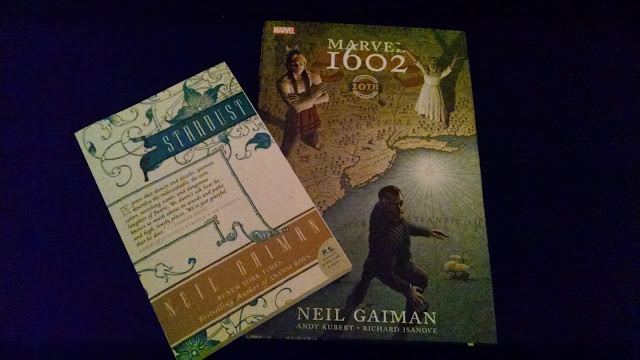 STARDUST is an adult novel that takes inspiration from fairy tales. It's written in a whimsical, almost childish, style, though the prose is anything but kid-friendly. MARVEL 1602 was an eight issue series of comics that featured some of Marvel's most iconic figures existing centuries before their time. To the best of my knowledge, it's now only available in it's trade, graphic novel format. As anyone familiar with this blog knows, I've read a good number of comic compilations, but this one will be kind of special since it's not really a volume of something much larger. The story begins and ends in between these covers which is something that I am very excited about indeed.

I'm anxious to see how I like these works and have actually started in on both. STARDUST is still kind of picking up for me. I'm only fifty or so pages in, so the story is just getting going, but seems to be moving in an interesting direction. MARVEL 1602 has hooked me after reading just one issue. The artwork is spectacular, the story is captivating, and the myriad of different Marvel heroes popping up as altered versions of themselves is just fantastic. I can't wait to see where these works will take me.