FLASH FICTION: AN EPISODE OF DEATH 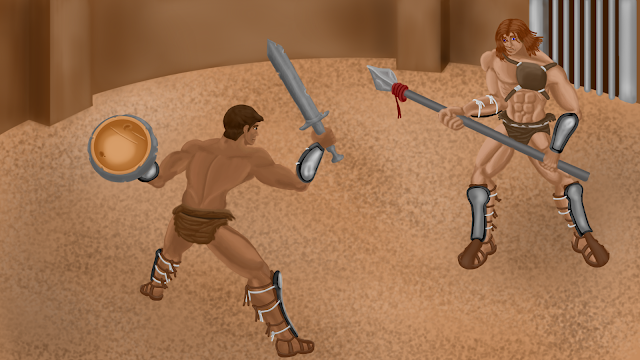 I bow my head and pinch my eyes shut, doing my best to keep everything quiet and dark, but nothing can drown out the roar of the crowd that sits above me. My breathing comes sharp and my muscles feel tight. I exhale deeply and make short hops up and down while I shake my arms out. Then I hear footsteps coming towards me. My hazelnut eyes pop open before I take a few steps over to the barred door. I see the guards come down the narrow corridor. They wear shimmering silver armor – which is the only thing in this dingy prison that shines. There’s a savage spark in their eyes as they slip the key into my door and unlock it with a clank.
"Time to go, kid," one of them says hoarsely.
They each take one of my arms and tug me along gruffly in the direction that they came from. The passageway opens into a chamber where they toss me onto one of the benches which line either side of it. I peer through the thin iron bars of the gate in the front of us into the dusty arena. The crowd wriggles in an indistinct mass of flailing limbs and bobbing heads, their voices pouring into one droning echo. The guards strap on light, metallic shin-guards over my leather calf-high sandals and slip equally thin gauntlets onto my bare wrists. Then they pull me up and hand me a battered round-shield and a sword dulled by repeatedly sloppy sharpening. It’s troubling that this is all I will enter the ring with: some worn weapons, flimsy armor and nothing else except for a tattered subligar. It’s hardly a modest or well-protected way to enter into a fight, but it’s how they shove me into the arena all the same.
This is when I see my opponent for the first time. He’s a young man like me with a light build and earth-colored hair. His sky blue eyes peer over to me as we step into the tight arena from opposite sides. He’s equipped in the same way as me except that he carries a spear and has a leather guard covering the right side of his chest. I wonder why they wouldn’t give us even just a little bit more to wear and then I realize that this way they can watch us bleed better. They can see every cut and stab even from a distance. He and I, after all, are no one. We’re just slaves to a lanista entering into a humble facility of death. We have nothing to offer this crowd except for a strong fight and our own blood.
I accept this when I meet my opponent in the center of our sand battleground. Looking into his piercing eyes, I realize that I don’t just need to avoid death, I need to kill him. I knew this all along of course, but this is when I know it. His eyes stay locked on mine. Perhaps he’s coming to the same realization as I am. Maybe he's done this before. I note the reach that his spear might grant him and decide that I will need to make the most out of my dented shield. We circle each other, plotting one another’s demise.
Then I see his sharp eyebrows pinch together and he lurches forward at me. I step to the side with my shield held up to avoid the thrust of his spear. He pulls the weapon back just in time to block my swing with the iron neck of his weapon. The metal clanks together and sends a sharp vibration through my sword arm. I recoil in shock. My opponent takes a couple of steps back as well, his arms are flexed in pain. This is when I recognize that we are both novices. I believe now that I have a chance.
He throws the tip of his spear at me, this time I duck low and use my shield to deflect the assault. I shove the end of his weapon to the side and slash at him while he’s vulnerable. He tries to back away, but I manage to slice through his thigh, leaving a gash which oozes blood. He screams out in agony and I can hear the crowd's dull moan turn into an excited roar at the sight of his injury. A savage impulse moves me to charge forward. His footing is no longer as strong as it once was. He favors the hurt leg and limps when he has to move. His spear strike is not weakened, however, and he manages to graze the lean flesh beneath my ribcage. I cry out as I stagger to the side – my shield held high. The crowd howls again, but not for me this time.
When the next strike comes, I roll away, the sand clinging to my sweaty torso. Then another comes which I use my shield to defend against. I realize his strikes are getting weaker as more of his blood drips down his leg and seeps into the discolored sand. I repel his next blow with my sword and leap forward to slice open the bicep of his dominant arm.
His wounded limb falls to the side, dragging his weapon down with it and leaving his torso undefended. Without thinking, I shove my sword through his abdomen. He falls against me with a grimace and a groan before collapsing against the sand with a muted thud. A thunderous applause echoes around me. It’s the sound of victory, but also that of defeat. This isn’t the Imperial Coliseum, it’s just a small theater where no-names fight, but in this arena here and now, I am a god. I now know the glory of victory, but also the pain. As I glance down at the defeated body lying on the ground, I realize those pale blue eyes will never leave my mind.