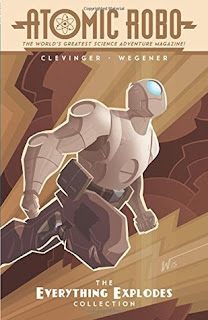 INTRODUCTION
Every now and then, it's fun for me to read something a bit whimsical. It can be nice to delve into something that doesn't take itself all that seriously and doesn't really grip me in the way that something darker and more serious would. ATOMIC ROBO: THE EVERYTHING EXPLODES COLLECTION is one of those works that is really only meant to entertain. And that is just what this comic series does. Normally when I read and review comics, I do so by volume, but this work actually collects volumes 1-3 in the series. I'm not quite sure how many individual issues that comes out to exactly (I didn't count), but I think it's probably at least 15. I'm very glad my friend introduced me to this series and I had great fun with it the whole way through.

HOW I RATED IT
3/5 It's a charming piece of graphic fiction and I really did like it, but I didn't REALLY like it, so that's why it's getting a 3/5.  I think this is one of those works where there really isn't a whole lot to analyze or critique. It just is what it is and if the absurd humor and cartoony artwork resonate with you, then you will undoubtedly like this as I did.

CHARACTERS
There are honestly so many different characters that pop up that I can't really mention them all within the span of a review.  Most of them are indeed a bit flat (which makes sense given the amount of face time they get), but all depicted in an outlandish enough way to make them entertaining presences. There are even characters from history. Thomas Edison, Nikolai Tesla, and even H.P. Lovecraft all make appearances in the story, though their portrayals are by no means historically "accurate." There are some other non-historical standouts as well. Robo himself is a witty enough hero who's bravery borders on cocky quite often. He's a humorously plucky leading man (or bot) and a great deal of fun to follow. Then there's Jenkins who doesn't say much, he just kills monsters dead and he does it with style. He's easily my favorite recurring character and I only wish that there was a little more of him. The list of wacky people goes on, but suffice it to say that there are more than a few standouts in this crowd, even if they only have one-off appearances.

WORLD/SETTING
In true comic book fashion, there are almost as many exotic places that readers are brought to as there are colorful characters. Hidden Nazi strongholds, Egyptian deserts, governmental facilities, expensive mansions, and dusty tombs are just a smattering of what you can expect from this universe. What's more is that the setting spans as wide a breadth when it comes to time as it does space. One volume is largely based on WWII, while another is more set in the present day, and another spans a variety of decades. It's all extremely varied and I never once found myself getting tired of one place (or point in time).

PLOT/TONE
One of this work's greatest selling points is also what I'd consider to be it's most significant drawback which is that the writers really like to jump around a lot. On the plus side, this lets readers dive right into each issue unhindered. There's definitely a sense of continuity, but in terms of a narrative pull, it all tends to feel a bit random. There are a lot of different villains and although one is recurring, the others are never around long enough to really pose any serious threat. All of this said, there IS a theme that each volume runs with. The first is centered around the Action Scientists who are essentially Robo's modern day strike force. The second is all about Robo's exploits in WWII, and the third is perhaps the best of the collection. It is focused around an interdimmensional enemy that Robo encounters throughout time and must eventually stop. It was still hilariously random, but it also had a bit more appeal to me in that there was sort of this central conflict tying things together. All in all, this isn't a story one read's for the plot, it's rather a work that is read for the outlandish story beats and tongue-in-cheek humor.

ARTWORK
Simple, yet vibrant is how I would describe the work's visuals. There's nothing special going on when it comes to the inking/line art. For the most part, it's on par with a relatively well-made cartoon which is certainly fine, but not a style that contains much detail. Where the pages really come to life is in the coloring and lighting of each panel. The pallet is striking and the way light is rendered gives everything this sense of volume and drama that it would not otherwise have. It's certainly not the nicest looking piece of graphic fiction out there, but it's quite lovely in it's own right and I think most will find it to be quite easy on the eyes. It's just not the sort of work that I found myself stopping on each panel to admire like I often do - though given the silly plot, it's probably best that I felt more compelled to simply breeze through the pages.


CONCLUSION
This isn't something that really moved me in any way. It didn't make me ponder the meaning of life and it didn't really make me feel anything in particular while I was reading. But it did make me chuckle a few times and I think this is a series that kind of captures the original magic of comics as an entertainment medium. It's kind of like a brilliant love letter to the comics of old while still bringing new things to the table. It's marvelously unique, pleasantly witty, and graced with well-crafted albeit simple imagery. I can't promise that it will knock anyone's socks off, but I know a couple of people who are all about this series, and I can say that I am quite enamored with it myself. I look forward to reading more of Robo's adventures in the future and am happy to have experienced what this collection has to offer.

ATOMIC ROBO: THE EVERYTHING EXPLODES COLLECTION is available as a paperback on Amazon.
REVIEWS