MINI REVIEW: SOMEWHERE IN BETWEEN 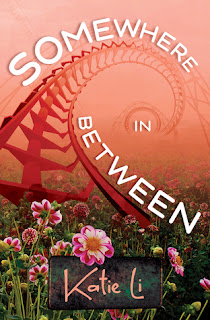 INTRODUCTION
It's always nice to try out something that I'm not 100% sure that I will like. This can mean reading something that doesn't fall within my typical scifi/fantasy genre preferences, reading something in a different kind of format (novella, comic, etc.), or just trying out a book that loosely relates to something I like. The latter of these is where SOMEWHERE IN BETWEEN fell for me. It's a fantasy novel of sorts, but not you're typical knights, dragons, and quests type stuff. It's instead a book about two young people who find a mystical "in-between place" and use it to cope with their adolescent woes. I discovered it at a local bookstore and was intrigued by the premise of it as well as by the fact that it was by a lesser known author named Katie Li and a relatively nearby small press called Kung Fu Girl Books. It's also very short, coming in at only 138 pages on a typical paperback-sized product and with some heavy indentation at that. It's definitely more elaborate than a short story, probably clocking in somewhere in the word count range of a novella which made it that much easier for me to give this one a shot.

HOW I RATED IT
4/5 I can wholeheartedly say that I am glad to have bought and read this book. It's not the most astounding piece of fiction I have ever read, but it felt typical enough for me to connect to it, while also being strange enough for me to consider it special.

CHARACTERS
The cast in this piece is fairly modest in size. It stars Rom, a geek of sorts, though not one with particularly good grades, and Magnolia, a kind of wannabe punk. They're the sort of misfit children that find each other and immediately establish a bond. They're not hipster or antisocial or even outright rejects, they're just kids who struggle with the challenges of adolescent life. They have friends and even relationships, but still have a hard time finding connections that really make them feel alive, ones that make life worth living. They're a far more compelling pair than I'm probably making them sound, though. In spite of how heavily they fall into classic teen angst tropes, these two actually feel very sincerely developed. This is probably because they aren't necessarily rebelling against the world. They don't have some juvenile chip on their shoulder nor do they insist on being miserable, they just can't seem to find satisfaction in life the same way that others do. They simply want something a little more. Readers also get to see them at different points in time and it was great fun to have the different nuggets of character development all come together around the middle of the book and then we get to see the characters grow from there. It's a very clever way to tell a love/friendship story and one I really enjoyed. In terms of the rest of the cast, there really isn't too much going on. There are other characters in the story, but they are largely to the side and you'll never really get to know them very well.

WORLD/SETTING
The world as it stands in this book is largely based upon the two characters that we follow. While I did get the sense that this set is a fairly standard, contemporary backdrop, it felt like much more than that the whole way through. This is mostly because of how differently the main characters see their corner of the world. You have Magnolia who likes to collect little odds and ends. Then there is Rom who likes things to stay as they are and does his utmost to hang onto the past in spite of how ruthlessly life moves forward. Then there is their secret place where they slip away to in order to escape the troubles of the real world. What is perhaps most interesting about the setting is that it is actually a little unclear how much is actually "real" and how much is imagined and/or metaphorical. This effect has a little less to do with the imagery though, and a bit more to do with the way the story is told.

PLOT/TONE
As I mentioned before, the flow of the narrative is not really all that linear. There is instead a lot of time jumping to different moments in the main character's lives. At each point, we learn a little more about them and slowly start to get a picture for who they really are. About halfway through is when the story proper really begins. It takes all the pieces that have been collected for the reader and moves them forward in a narrative pull that is a bit simpler to follow, yet also increasingly confusing. There are a lot more trips to the in-between place during the latter half of the book and as the characters go there more, they seem to bring bits of it back with them. By the end, I was left questioning what was really going on and how much of the prose I should actually be taking literally. For those that don't appreciate surreal or even just trippy literature, you should probably know that the ending is just that. I didn't LOVE how it was done myself, but I did enjoy it. It's just weird and different and it will make you think about the book for a little bit after you've put it down, the latter effect, I'm actually a fan of.

CONCLUSION
It's not perfect or even completely original, but SOMEWHERE IN BETWEEN has this feel to it that is unlike any other book I have ever read. I really connected with both the characters during the brief span of their story and greatly enjoyed both the more mundane and somewhat supernatural elements of the narrative. It's a fun and easy read that could easily be killed in a single sitting, or enjoyed over the course of several sessions. It definitely requires a somewhat open mind to really be appreciated, but if you go in looking for something a bit different from what you've ever read before, then you will probably walk away feeling pretty fulfilled. I read this in paperback and would highly recommend that you do the same because it is a beautifully constructed production.

SOMEWHERE IN BETWEEN can be found in print and kindle formats on Amazon.
REVIEWS