MINI REVIEW: THE MEEKER AND THE ALL-SEEING EYE 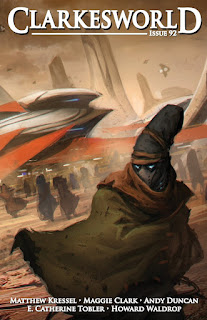 INTRODUCTION
Every now and then, I come across something that resonates with me in an unexpected way. Sometimes this is due to a plot unlike any other, a particular narration technique that  would only work for that specific story, or perhaps just a nice twist at the end. In any case, I really enjoy being surprised by works of fiction and Matthew Kressel's short story, "THE MEEKER AND THE ALL-SEEING EYE" is certainly a story that gave me that sort of satisfying bewilderment which I look for in science fiction and fantasy.


HOW I CAME UPON IT
This is one of the stories up for the Best Short Fiction award in the BookTubeSFF Awards. I've been putting it off since I knew that it would be a short read, but since September is nearly at its end, I figured it would be best to finally experience the phenomenon that is "THE MEEKER AND THE ALL-SEEING EYE."

4/5 I would not go so far as to say this is the best short story ever, nor is entirely original in some of its core concepts or techniques. Once you finish the last few lines, though, you will realize that this is certainly one of the more fulfilling stories you have probably read in a good long while.

CHARACTERS
Kressel has smartly kept the cast of this sprawling space fantasy very tight. There are really only three characters to speak of, though others show up in one of the character's memories. Without dipping too deep into spoilers, The Meeker and The All-Seeing Eye are both alien characters which belong to two different species. The most distinct of the two in terms of both appearance and personality is The All-Seeing Eye who is described as a creature which consists only of an eye and has an amorphous body which can seemingly change shape and may or may not be made of some kind of gaseous substance. It's also a curious creature with an obsessive passion for obtaining new knowlege. The Meeker, as his name might suggest, is not as awesome as The All-Seeing Eye. He is less so that she can be more, or so the character explains to the third figure in this book who provides the human presence for readers to connect with. My one problem with the Meeker is that I never got a very clear picture of what he actually looks like. From the limited descriptions of his various body parts, he appears to be a solid sort of being, but the imagery was never concrete enough for me to really formulate a lasting image. As I just mentioned, the third principal character is human and she is remarkably well described, largely because of The Meeker's shock and awe at what she looks like. All in all, the cast is solid and their interactions with one another were compelling. I also found that The Meeker became an increasingly interesting character who I had an easier time relating to the further the story neared its end.

WORLD/SETTING
What is most interesting about the world in this story is that there is no world. The only life worth speaking of exists on the Bulb which is what the spaceship that The Meeker and The Eye pilot is called. The rest of the story space is nothing more than...well space. The Bulb flies through the galaxies collecting fragments of what is left of things that existed before, but are no longer real in the sense that you and I might understand. The human character is reconstructed in a tubular device from a space fragment found during the ship's endless journey. Those who've seen The Fifth Element will probably have a very clear image of what I mean by "reconstructed." Overall though, the world is largely centered around the characters as well as places that are no longer in existence. I thought this was a very cool and unique take on a sort of post-apocalyptic theme since in that genre of science fiction, there is usually SOMETHING left of the world. This is not to say that the overall tone of the story is entirely hopeless though.

PLOT/TONE
The plot might seem a bit trivial and weird at the onset. It is indeed a VERY alien tale that takes place in a setting unlike anything you're probably familiar with. It is for this reason that the story might turn away a good deal of its reader base early on. It doesn't help matters that there are some techniques used which are generally considered lazy by most readers. The first is exposition dumping. This could really just be named, "Exposition Dump: The Story." I'll admit that this initially turned me off, but I was happy that I stuck with it because I soon realized that this is one context in which heavy exposition actually makes sense. So much of the story is focused on what was rather than what is which makes retelling the past so integral to the plot. There is even a method to the madness of how Kressel makes use of the "As you know, but I'm gonna tell you anyway," fiction trope which dominates the opening portion of the narrative. In time, all of the weirdness starts to become clearer and all of the annoying tricks that Kressel employs make sense in a sudden face-palming moment. All of this probably sounds very vague, but in the interest of keeping things spoiler-free, I don't dare say any more other than that the ending paragraphs of this work make it all very worthwhile.

CONCLUSION
In spite of the initial gripes many readers might have with this piece, it is actually one of the more accessible pieces of short science fiction out there. Because there is such a uniquely ethereal setting, readers don't have to deal with constant name-dropping of fictional technology. In fact, this work requires absolutely no experience with other science fiction in order to enjoy, which is something truly special in a genre where so many works build upon one another in terms of their vocabulary. It is a very short read (it is a short story after all) so I'd certainly recommend that anyone and everyone give it a try. It was thoughtful in ways I didn't expect and entertaining in a manner which felt unique to this particular work.

Furthermore, this story can be read for free on Clarkesworld Magazine's website. Subscribing to the magazine is surely encouraged if you like the content that they produce, but it is not mandatory for reading this work. The issue in which this story appeared can also be picked up in print and eBook formats from Amazon.
REVIEWS