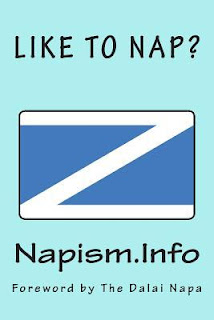 INTRODUCTION
I normally enjoy very dark, serious fiction with lots of crazy characters and fast-paced plots. Every now and then, though, it is nice to take a break from that type of literature and just read something that's short and funny. Napism.Info promised to be one such book.

HOW I CAME UPON IT
The author, Mik Hetu, is an active member within the indie author community. He's set up a website called the Indie Book Booster's club which provides authors with a means to network and get some feedback on their books from those that are in the indie business themselves. It's a great idea both on paper and in execution since the active members on this site have given me some really honest feedback on my work so far and I have in turn done the same for a couple of them. Since Mik is such an outgoing and likable guy, I was curious to see what Napism was really all about and if it was something that would appeal to my funny bone.

4/5  As the title implies, this is a book with about as much information as one could ever hope to find on Napping and the “Napists” that this book provides comprehensive insight into. Part collection of funny thoughts on those who enjoy their naps, part spoof on informational textbooks, but mostly just a prolonged piece of satire on how we all are either active members of the “Napist” community or have friends/family that belong to this order of passionate nappers. This is not really a novel or even a story so much, but it does have a healthy amount of entertainment value.

NOTE
Since this is not a novel (I'm not really sure what I would classify it as) the review will be done in an altered version of the format that I normally use.

THE JOKES
The main centerpiece of this book lies with its extensive joke, or rather, set of related jokes. Fortunately it’s not written in such a way that I needed to wait until the end to get the punchline. The foundation of the joke is established right on the very first page of the text and the subsequent pages are more of an expansion upon the gag as well as different remixes of it. There are elaborate lists, short fables, and even an entire appendix of nap-related terminology. The author of this book is a very devout Napist indeed. While I am a bit of a non-Napist, I certainly have a few family members that I thought of when reading this which provided me with some genuine laughter along the way.

THE APPEAL
Nappism.Info, is one of those types of books that really needs to be read in the right mindset. If you’re looking for a complex story-line with high-stakes conflict and well developed characters, then you might want to hold off on reading this until you have satisfied that literary craving. But if you’re in the mood for something clever and unique (which I was at the time) then this one will not disappoint. I said before that this is a very quick read so you really don’t have a whole lot to lose here. The chapters are also pretty compartmentalized in that each of them has a very different focus so some may very well find that they appreciated some more than others – I found this to be true for myself.  Like I mentioned before, the real attraction that people will have to this is how it makes them think about those in their lives that enjoy brief daytime snoozing. Plus it has this quirky sense of humor that I personally found to be great fun. If you’re not into humor that is based off of satirizing common life, referencing pop-culture, referencing history, or comprehensively breaking down the art of napping, then this probably will not do too much for you. But if you think that any of those sort of things will resonate with your funny bone, then this is an easy book to recommend.

THE HIGHS AND LOWS
Like any highly quirky piece of literature, this book does have its highs and lows – at least it did for me. The chapter that contained nap-related fables was certainly one of the big highlights for me and I wished that section ran just a fable or two longer than it did, but the entire latter half of the book was actually quite a bit funnier to me than the initial half. That’s not to say that the first chapters are bad, but they do contain very long lists which play off of the same jokes and that got a tad tiresome for me. Had those lists been a little more condensed, I may have enjoyed the earlier part a bit more (to be clear I liked the list format, it was merely the length of the lists that made these punchlines feel redundant for me). The appendix was another major highlight since it did such a wonderful job at humorously defining the core elements of Napist culture. The plays on words were phenomenal and the references to world culture and pop culture certainly had me chuckling. This author is a master of toying with the English language and an expert on napping.

CONCLUSION
All you can really ask for in a book like this is that it brought you some moments of happiness and laughter. While this didn’t do that for me at every turn, it’s also very tough to cater comedy to each and every demographic so I don’t find it all that troublesome that I wasn’t in love with every bit of it. I’m at a stage in life where I prefer shorter reads to longer ones (probably a symptom of having substantially less free time) and I’ve been finding more and more that sometimes I just need something that gives me a good laugh, yet isn't mind-numbingly stupid. Napism.Info gave me some intelligent humor to laugh at, providing no more and no less. It’s a jolly little read and I can certainly say that I will be far more understanding of the Napists in my life from this day forward.

NAPISM.INFO is available in eBook and Paperback editions on Amazon