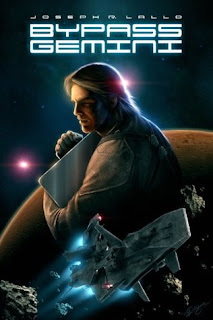 INTRODUCTION
I love science fiction and fantasy novels. I love wild adventures with crazy characters and high stakes. This sounds like a simple enough set of criteria to satisfy, yet stories in this genre can so often fall flat for me. It's not enough that I'm reading a story about aliens and spaceships, or knights and dragons, I need to CARE about the characters and world. Don't get me wrong, there's plenty of good stuff out there, but finding something that hits just the right mixture of all the things I like is a much taller order than the statement above would lead one to believe.

HOW I CAME UPON IT
What first drew me (aside from the unbeatable price of FREE) was the gorgeous cover. I try not to judge a cover too harshly because I know they're hard to get right, but this one is so good and makes me wish the book existed on physical form because it would look great on a bookshelf. Fortunately this book has a lot more to offer than just a pretty cover.

NOTE
To clarify the free part, this appears to be a book that is permanently free. It's the first in a trilogy of books so I think this one is just always available to anyone who wants to start up the series and buy the next two if they like it. Since this is an indie book, I think that's a pretty smart strategy and I was intrigued enough by the cover and description to give this one a go.

4/5 This did not 100% meet my definition of a perfect SciFi novel, but it came pretty close. There's tons of excitement, lavishly described locales, and a cast of genuinely unforgettable characters. I had some small issues with the cast, but given the fact that everything connects really wonderfully at the end and that this is only the first part in a series of three books, I think it is safe to assume that it just gets better from here.
FORMATTING AND READABILITY
While this isn't normally a category for me, it's worth mentioning because one of my few gripes with the work has to do with formatting. While there's nothing strictly wrong about how certain things are done, there were several things that did throw me off a tiny bit. The use of #s as the indicator for a scene change were easy for me to miss, especially the first time it was used. Spacing is off in certain paragraphs and I would have liked a bit more out of the headings. Having it be a tad bigger or maybe a slightly more interesting font would have just added a lot to the visual experience. Here's the thing though, these are literally the worst editorial issues that exist in this enitre novel. I ran into no grammar, spelling, punctuation, or any other editorial mistakes. Seeing as how it's not uncommon to come across one or two of those even in books supported by big name publishers, this level of technical excellence is really impressive.
CHARACTERS
The characters are a rather motley crew, even for SciFi. I don't know if I would say they are all likeable, but they are very distinct. There are also a couple the get introduced early on and don't play a huge part until the end, but they are eventually addressed further. In fact, all of the moving parts are brought together in a decidedly natural way which adds a lot to the believability of the world. There were definitely points where I just wanted a character that I could like. Lex is a strong protagonist to be sure, but he's probably not the type I'd want to hang out with. The same can be said for a lot of the personalities I this story. A lot of people enjoy casts like this, but I find it draining after a while. That said, I came to like a large portion of the cast quite a bit more towards the end of the story when things really start coming together and characters develop a bit. Neither Lex, nor many of the side characters are the same as when they were first introduced which felt really rewarding to me as a reader.
WORLD/SETTING
The world is another major highlight to this work. The mildly dystopian element complements the cloak and dagger SciFi quite nicely. There are several planets that Lex goes to and each feels really interesting and distinct. The exotic and varied locales are a large contributor to how much character this work has and played a large part in why I cared about the events of the book. Since these places are a large part of what drives the plot, not to mention where a lot of the fun comes from during the adventure, it's hard to say more without spoilers.
PLOT/TONE
One of the best parts of the book is its fantastically paced narrative. There's a bit of hard SciFi mixed in with a really charming noir sort of feel. There's a lot of contrast to be found, but it's not cartoonish. Everything and everyone in the story is extremely vivid in the best way possible and at no point did I feel the plot drag. We're introduced to Lex, the main character, in the middle of a tense space crash and then we go back to meet him as a down on his luck ex-racer who lost everything to some poor decisions. He runs a lot of odd jobs, one of them less legal than the others. He runs a courier service which circumvent the normal and accepted travel routes from planet to planet, all of which are controlled by a dictatorial travel and communications company called Vector Corp. One such package contains something this company wants returned to them and Lex gets himself mixed up into something far more complex than he agreed to.

CONCLUSION
It’s been a very long time since I’ve read this type of science fiction and it has been even longer since I read one with this level of quality. I may not have loved all the characters, but I liked how my perceptions of a lot of them changed as the story progressed onward. Many were used in really interesting ways. There were a number of points where I felt like some of the more important ones were underused only to have them come up in a critical way during the final chapters and prove me completely wrong. The action sequences were great and not super over-the-top so as to distract from the story. The ending also is a nice wrap-up to the main story threads while still leaving the door open for more stories. This is the type of ending that I love because I hate cliffhangers, especially when they come at the end of the first book in the series. I’m excited to see where the other two books in the trilogy take things. I want to see what becomes of these characters and how Lallo improves upon the narrative and world(s) in the next installments so I will definitely be picking them up in the near future.